The weather did clear up in the night so after a 4-45 wake up call we were on our way by 6 up to the Parang La  (5,586 metres).  It was daylight but the sun was behind the mountains and it was very cold.  Despite only wearing trainers Christine was complaining about her cold hands rather than her feet.

Sagar was leading the group and for once no one shot on ahead of him.  Dilip was taking no chances and Shyam, Pirtha, Pandbhabur and Namgyal and had joined to help us on the ice during the ascent up the glacier.  Following us were the two Belarusians but once we got to the glacier they took a more direct and easier looking route up its side.  Dilip assured us we were on the best route and that theirs was dangerous as the glacier edge was an overhang that could break at any moment.

Christine and I (and Malcolm) had bought some Yaktrax (poor man's crampons) and they worked a treat.  It was incredibly icy and fairly steep.  Christine was also a bit nervous and was clearly thinking about her rapid descent on her back down a Bulgarian glacier in the Pirin mountains a few weeks earlier. She sensibly got in immediately behind Sagar.  The fact that Sagar was a proper mountain guide (rather than a cook) showed.  He didn't hang back waiting for Christine to ask for help but grabbed her arm whenever there was a tricky bit.  It was steep and treacherous but but the frozen stones in the ice provided reasonable footholds and we were soon enjoying ourselves and forgot the cold.

Within about an hour we above the steep icy bit, onto a flatter part of the glacier and able to relax.  The glacier itself looked like frosting on a cake and very pretty, and the sound effects of the underground meltwater gurgling away reminded us of our 3 night adventure camping on a glacier in the Celestial Mountains in Krygystan a few years ago. . The views back down the valley were amazing and the best of the whole trip.  The scenery built up in layers. The snowscape in the foreground with the glacier cracking up as it edged its way down the side of the mountain; the deep valley where we had camped last night now in sun; the huge flat bottomed valley where we had crossed the river yesterday afternoon; and beyond that layers of mountains including a final layer with snow on top.

Dilip and Sagar, although they were always very cool about the climb, were clearly pleased to get us across the ice and into the sun without incident.  Even the pony man, who had bought the ponies and horses up the same way, seemed relieved that we had got past the worst bit. 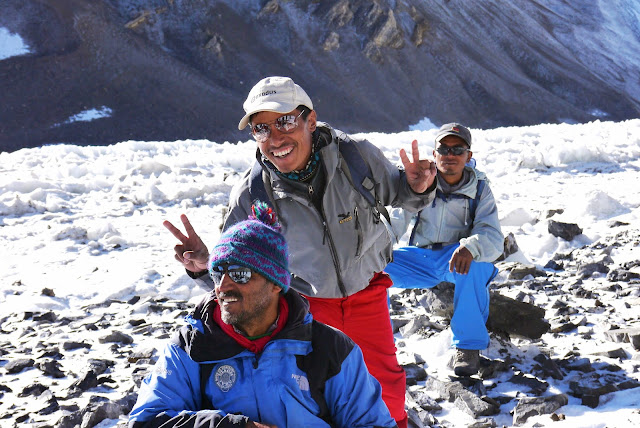 On the top of the glacier it looks pretty flat, disappointingly a bit like a big open ski run.  Of course it isn't and instead it's a steady relentless climb which at this altitude very tiring.  There is a steep final ascent but by now we knew we had done the hard bit and it felt easy.  The Belarusians got to the top just ahead of us and they wave a final and very jolly goodbye - they plan a much longer day today than we have in mind.

The top is literally the high point of the whole trip and a very significant milestone.  We all pose for pictures and an Italian, who has come up from the other side, takes a group photo.

The descent down the other side towards the Spiti is a sharp contrast to everything that has gone before  South facing, there is no snow, just a deep litter of sharp angular rock debris.  The trail heads steeply down and into a deep gorge. The wide open Parang Chu has been replaced with something altogether more claustrophobic but equally as dramatic.  By early afternoon we arrive at a campsite and in time for a late lunch.  It's a spectacular location surrounded by huge cliffs.  The location of the toilet tents looks just a bit exposed....