"Walking the Camiño dos Faros", published in 2019, is my 4th Cicerone guide.  This article provides a background to the walk and why I think it stands out as one of the world's greatest coastal walks.

In December 2012 a group of six Galician hikers, friends since childhood, and two dogs decided to walk from Malpica to Fisterra; a 200km journey around the coast of northwest Spain. They wanted to create a route that stayed as close as possible to the sea. Like many Galicians, they love the traditional landscape, culture and way of life and devising the route was their way of inviting others to enjoy it.


The name of the route, Camiño dos Faros, refers to the many lighthouses built over the past two centuries in a vain attempt to render the coastline safe. Its coastline is known as the Costa da Morte (Coast of death) – a name coined by the British press in the 1890s after a series of deadly shipwrecks.

When I first walked the Camiño dos Faros in April 2016, I was amazed by what had been achieved since the group had plotted the route four years earlier. Particularly impressive was the obvious support the Camiño dos Faros had among the local community. Not only was the trail cleared and waymarked, there was a programme of activities attracting hikers, bikers and runners from all over Galicia to the coast. Key events, which I was lucky enough to sample on my first trip, are the eight Sunday hikes along each of the route's eight stages. The Spanish do things socially and hiking is no exception; spending a sunny spring day with 500 or 600 Galicians felt like a real privilege.

Not everyone shares the Spanish love of crowds and on most days, hikers will have the route to themselves. Community support, however, is essential for the long-term sustainability of the route, not least because farmers have long since abandoned cultivation on the cliff-tops, and without the active support of the locals the route would soon become overgrown and impassable. As it is, the group of six have worked hard behind the scenes and secured the support of all levels of local government (town, provincial and regional). The route is also scheduled to be incorporated into Spain's GR network of Grandes Recorridos.

The original six, despite their achievement, maintain a low profile and although they make sophisticated use of social media, branding and marketing, keep their own identities a secret. I met them on both my trips and shared a meal with them on the second one, but I still don't know their names. What I did get was a lot of help and support, and this contributed to the pleasure I got from writing the book – almost as much pleasure as walking the route.

Coastal walking at its best

Six of its eight stages (each stage corresponds to a day's walking) follow a mix of cliff-top paths and pristine sandy beaches, while the other two head inland, circumnavigating rias along what is a very indented stretch of coastline. Most stages start and finish at small fishing towns with plenty of choice for good-value accommodation.

To get the best out of the walk, it's best to embrace what even in Spanish terms is a distinct culture, history and cuisine.

Galicia is a particularly remote piece in Spain's regional jigsaw. The locals, on the other side of a mountain range and away from Spain's metropolitan centre, are proud of their own traditions. Their local language, Galego, thrives and is spoken by a higher proportion of the population than the equivalent in the Basque Country or Catalonia. It is used, instead of Spanish, to name places. Although the language is not related to Gaelic, Galicians see themselves as part of the Celtic Atlantic community and the common themes, including bagpipes, folk dancing and Celtic crosses are easy to spot. They even have their own version of the leprechaun, an imp-like creature that has been adopted by the Camiño dos Faros

Galicia is the most westerly point on the European mainland and like Ireland, Cornwall and Brittany, there is a strong 'edge of the world' theme to its folklore. The countryside (and weather) is also similar and features numerous prehistoric castles (castro), standing stones and ancient burial sites (dolmens).

The livelihood and culture of the coastal communities are dominated by the sea and many of the dense programme of fiestas, which take place throughout the year, have a maritime flavour. On my last trip, I was in Camariñas in July when the Festival to the Virxe do Carme took place. Celebrating the local patron saint of fishermen for some reason involved a noisy flotilla of trawlers, loaded with visitors and each covered in branches of pine, sailing around the bay discharging fireworks. Onshore, groups danced in the streets and the costumes and dancing techniques, to the untutored eye, appeared close to those of Morris men back home in England.

The Spanish, of course, love fish. While busy supplying the rest of Spain, the Galicians keep the best stuff for themselves, preparing and eating it with great panache. Shellfish, generally produced locally, is eaten with gusto. The coastline, with its mix of clear water, rocky coastline and secluded bays, produces a huge variety of shellfish and if, like me, most of the fish you eat is in batter, selection and consumption can be a little challenging. If pushed to try something new, then it must be percebes, barnacles shaped like crabs' claws, which grow on rocks exposed to crashing waves. It's harvested by men with buckets attached to the shoreline by a rope and those that survive are richly rewarded.

If you're in Corme at the beginning of July, then your visit could coincide with the Fiesta do Percebes, when the locals and gastronomes from far and wide descend on the town most closely associated with this unique crustacean.

Little crosses along the coast near Corme, presumably for lost percebe harvesters, are a reminder of just how dangerous this stretch of coastline is – both for local fishermen and sailors on longer journeys.

As well as lighthouses, other reminders include the Cemeterio dos Ingleses, which contains the remains of English sailors from two shipwrecks at the end of the 19th century, the occasional remnants of ships and cargo and even in the names of beaches, including one that translates into 'the place where they burnt the bodies'. The most dramatic memorial, a huge slab of rock, split to resemble an environment shattered, relates to the sinking of the oil tanker MV Prestige in 2002. This didn't result in any loss of human life but caused ecological devastation and triggered a powerful response across Spain for better environmental protection. 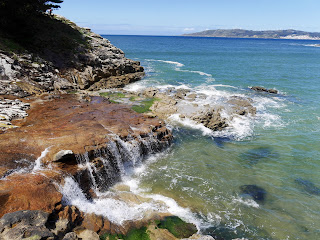 The Camiño dos Faros stands on its own as a great walk and, for many, it will be the coastal scenery that attracts, rather than the seafood or culture. The route travels around Spain's northwest corner and while ‘west then south’ describes the broad direction of travel, it masks the incredible variety of experiences the journey brings. One minute the path will be sheltered and the air will be filled with birdsong; the next it will be exposed, with the sound of crashing waves. There are stretches of sustained cliff-top walking, but sustained on this walk means lasting for 30 minutes or so, after which the walk's mood will inevitably change as it journeys across a hidden beach, descends down to a rocky shoreline or follows a little stream inland up a staircase of molinos (watermills).

It's a walk where the mood of an intimate, secluded bay contrasts with a wide west-facing beach onto which intimidating rollers crash, with views across huge bays to a lighthouse on the far horizon.
The route’s founders made their first journey in December, but it is possible to walk the Camiño dos Faros throughout the year, with each season contrasting accordingly. Galicia has a mild maritime climate and is wet in the winter. Streams that will be a dribble in summer will be a torrent in the winter and spring and by peak summer only the very tallest will be able to see above the bracken that features on some stretches. For me, the best time is spring and early summer (late April to early July), when the light is at its best and the flowers are out.

When I first walked the Camiño dos Faros, distracted perhaps by a lovely Michelin starred restaurant in a particularly unlikely location midway through the first day, I tried to devise a different schedule to the one recommended by the route’s designers. Of course, their schedule is the one that works, and although I enjoyed a lovely lunch, I paid for it the following day. The eight-day schedule is the best one, but some will find it tough. There are few big hills to climb, the highest one is 312m, but like other coastal walks it involves a lot of small ones. Fortunately, a bendy route can easily be straightened and, by snipping off the odd peninsula, shorter days can be devised.

The walk lends itself to place-to-place walking, staying in local hotels and eating in local restaurants. Although this part of Spain is not a tourist destination, there is a reasonable choice of good-value accommodation. If you don't want to carry your own gear, taxi companies will provide a bag ahead service and there are an increasing number of travel companies offering a full package.

Just before Muxia, reached at the end of Day 6, the Camiño dos Faros touches a branch of Galicia's more famous Camino, a northern variant of the Saint James Way. The six originators of the Camiño dos Faros have tried to construct something that is different in feel to the St James Way and more authentically Galician – the route is certainly wilder and more beautiful than the St James Way, sticking to the coast and avoiding roads. The last three stages do benefit from the range of accommodation that has grown to support the older Camino. The last stage of the Camiño dos Faros is, in terms of cliff top walking, the most dramatic and if there is a westerly gale blowing in from the Atlantic, it’s perhaps best avoided. In these circumstances, the more sheltered St James Way alternative can be followed and the life of a peregrino sampled. Either way the journey ends at Fisterra (Finisterre in Spanish), a lovely town dominated by a multinational crowd finishing a much longer walk.

Walking and writing about the Camiño dos Faros has been wonderful. I've experienced a beautiful walk, met and worked with the individuals who made it happen and learnt about a distinct and fascinating part of Spain. The locals are very proud of the Camiño dos Faros and there is an open invitation for walkers from everywhere to share with them a Costa del Morte adventure.