The E4 is one of a network of 11 long distance paths (soon to be 12) developed by the European Ramblers Association (the ERA), an association made up of walking groups from across the continent.  Like all the routes, the E4 joins up national long distance trails into an international pathway which grew as the membership and of the ERA expanded.  Initially the E4 went from the Pyrenees to the Neisiedler See in Austria, was then extended into Spain and Hungary and now goes all the way down through the Romania, Bulgaria, Greece, Crete and Cyprus. 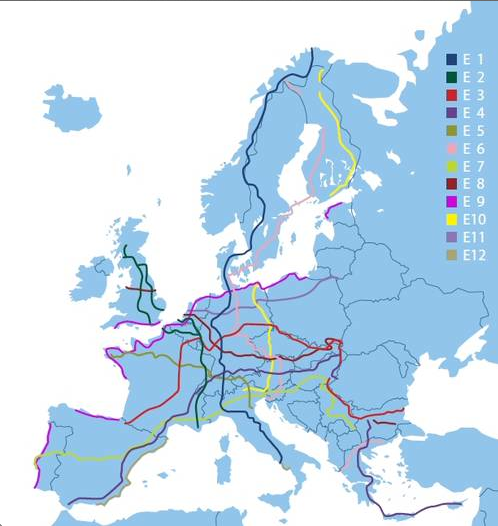 In 2011, starting in March, I walked from Tarifa in Spain to Budapest in Hungary along the E4.  It was an amazing journey and as far as I can tell I was the first person to complete this particular walk.

So why choose the E4?

, and perhaps foremost, I wanted the special experience of place to place walking across Europe.  Long distance walking in Europe, whether you measure the time taken in weeks or months, is different to anywhere else in the world.

In Europe you benefit from two unique legacies.

Firstly the footpaths themselves are nearly all superimposed on which date back to when travelling by foot was the predominant method of transport.  For most of Europe this wasn’t so long ago.  Today’s dense network of trails is based on routes which a couple of hundred years ago were used to take sheep and cattle into the mountains for summer grazing, to take goods to or to just link a village to the next village up the valley.
benefit from the rich European history of walking as a leisure activity.  This legacy, which dates back to the late 19th Century, means you can find amazing places to stay in mountain huts in seemingly impossible mountain top locations while walking along pathways developed by local walking associations over a hundred years ago.

Both legacies make long distance walking in Europe special. You can go to wild and wonderful places, not see anyone all day, but spend your evenings indoors with other walkers.  You can go from place to place, not just the variety of landscape but also different styles of accommodation and food.

I love this type of walking and given the enormous choice in Europe choosing a trail for a six month hike wasn’t easy.   I ended up with the E4 because, as well providing the mix of landscapes and cultures common to lots of routes, it made extremes of weather.   It took me through six different countries, a whole series of stunning national parks, and let me stay in isolated refuges, small villages, towns and cities.  Choosing the E4 meant I could start walking early in the year and follow the spring as it moved up through Europe avoiding the heat in Spain and the snow in the Pyrenees and the Alps.


Starting on the Atlantic Coast at the southern tip of Spain I started a journey that took me through some of Europe's most stunning scenery.


I crossed Andalucia through a series of national parks choosing northern of two options in the middle.  The northern option avoids the higher parts of the Sierra in March were covered in snow.  Lots of walking through the Cazorla National Park was especially wonderful.  It was full of and on one unforgettable day I saw a lynx and of wild boar.  I suspect I could have managed the southern option in March, it's the more popular route and I can't wait to go back and find out how it compares.


The walk through Murcia, was about 300 km long and took me through the spine of the province, from west to east, and includes the landscapes of the Spanish high plateau and the fertile plain of the river Segura.


The transition from Murcia to Valencia was a bit walking the 550 km trail through the province as a whole was a real revelation.  Heading north and on an inland track which parallels the coast I cut across the grain of countryside with huge gorges draining rivers into the Mediterranean to the east.  Accommodation was difficult in the middle once into Castellon things improved with going from one fortified town to another.  Castellon is definitely a must return to place.

So far the E4 had been tracking the route of the GR7, Spain's oldest long distance footpath but in Catalonia it headed down to the coast and along the ancient city of Tarragona.  I enjoyed Tarragona and the spiritual heart of Catalonia, Montserrat, but carrying on to the the GR 7 may have been a better option. Can't wait to go back and find out.

After two months in Spain I was crossing the Pyrenees into France.  The weather was terrible in the perfect in immediately to the north.  Great walking and the abandoned Cathar castles give the countryside a special spooky feel.

The walk through France along the southern and then eastern edge of the Massif Central was wonderful.  Particularly enjoyed the hot days through the Cevennes and even days through the Ardeche.   At times the scrub oak and long stretches of coniferous woodland became a bit tedious, particularly the bits either side of the Rhone Valley,  but once into the Vercors the scenery and views improved.  More huge limestone countryside with its characteristic cliffs and gorges interspersed with beautiful little towns and wonderful food.

Took a few days rest and recuperation at Grenoble before the last French stretch through the  and the French Jura. Some memorable days.

The Swiss part of the walk was really easy.  The first part was along 180km ridge walk known as Chemin des Crêtes Jura, or, once into German speaking Switzerland the Jura Howenweg.  The route connects Geneva with Zurich, tracks along the ridge to the north of the wide valley running through Switzerland and, when the weather is good, provides absolutely unbelievable views of the Alps to the south.  It takes a day to cross from the Jura Howenweg to the south bank of the Rhine and then three days to walk along the shore of Lake Constance to Bregenz.  Love walking in Switzerland, everything really is well , just a shame it's so expensive.

After Bregenz it's Alpine walking and there are two options; the first takes you along the " 01" and the second along the " 04".  I sliced and diced, choosing the 04 through Baveria along the "Maximilianweg" to Strasburg and then heading south and joining the 01 at Spital Pryn.  This was a more direct route to Budapest and the 04 involves than the 01.  Must say I'm a big fan of Austrian Alpine walking, the Austrians love their walking and it's well .  Staying in the mountain huts is a really special experience and I can't wait to do it again.

Once out of the mountains and into the relatively flat eastern part of Austria things started to fall apart in terms .  I guess for the Austrians, with so much choice, they just don't bother with the less interesting bits (unlike the Swiss who everything). It wasn't until I got into Hungary and onto the "Blue Way" that things started to get again.  After bad weather through Austria the sun came out and I hit Hungary in a heat as most of the walk was through a canopy of oak, ash and beech trees I escaped the worst of the heat.  Had been a bit nervous about accommodation in Hungary, not least because of warnings from Hungarians, but it turned out to be very good and great value.  After six months walking I perhaps rushed Hungary a enjoyed the last three weeks of the walk, particularly the last day Budapest a great deal.

As well as stunning scenery you get the chance to stay in Austrian , a fairly unique experience. The Austrian part of the walk is 1100 km.

Following the tradition of walks that represent the best of what each country has to offer the E4 follows the route of the "Blue Way", Hungary's No 1 walking experience.

Below are links to I did before the walk started.  Over the next few months will take these down and produce an updated commentary on what each stage was actually like.

If you want  the route on have a look at The E4 revisited - my journey in GPX, this provides links to my Viewranger page where details of the route can be displayed and downloaded
For a description of a recent journey along the E4 have a look at "Six Pairs of Boot: Spain to Cyprus on E4 Trail" by John Pucknell.