Stage 7 - The E4 from Carcassone to Lodeve

In its own right, standalone, the walk from Carcassone to Lodeve has a lot going for it.  Both ends are easy to get to and sensible people would spend a bit of time at Carcassone which should be on most people’s must see list.  The walking itself is easy, pleasant rather than spectacular, and there is plenty of accommodation along the route in interesting French towns and villages.   The only downside is the long trip from Carcassonne to Mazemet, which really needs to be broken up with a taxi trip, and one or two bits of fairly dull walking through commercial pine plantations.  It’s good if not quite spectacular walking. 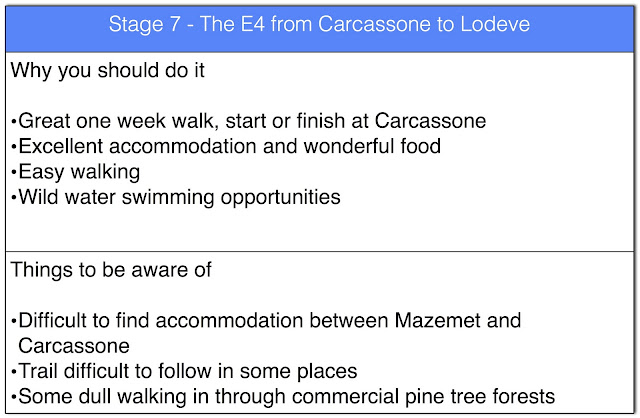 If you’re walking 5,000 kilometres you probably fail the sensible person test and I had decided that I didn’t want to stay in Carcassone.  Had done a huge walk the day before arriving, got there late, didn’t get my bearings and ended up in an expensive hotel.  I went through the walls, into the old town, and to me it felt 100 per cent tourist.  Don’t get me wrong I love going to see interesting places with lots of history but I struggle to flip from  the mode of walk walk walk to site see site see site see.  So apart from a perfunctory tick in the box I didn’t really see Carcassonne.

For the next six days or so the E4 goes through an area known as the Montagne Noire.  I might be making a big mistake here but I don’t think it’s a distinct range of mountains - it’s the southern flank of the Massif Central, and gets its name from the dark colours made by the trees on the northern side of the hills.  The area has lots of huge often spectacular trees, fueled by the rain coming in from the Alantic and indeed the rain which falls on these mountains provides essential irrigation for the fertile plain to the south.

The route itself continues along the GR36 to Mezemet and then heads east through the Natural Park of the Haut Languedoc along the GR 71.  For a couple of days out of Mezemet the GR71 follows the same route as the GR 653 which forms part of the St James Way.  For navigation I was armed with my GPS route download from GR-Info and the relevant Topoguide.  The Topoguides are usually excellent containing both a route map and suggestions for accommodation (in French of course).  Not so good on this stretch however and there were significant discrepancies between what was on the ground and in the guide. Clearly the routes do change and the Topoguide, GR-info and even the maps don’t always keep up.

First day out of Carcassone involved an insane walk all the way to Mazemet.  I couldn’t find anywhere to stay on the way (although en-route found a Gite d’Etape at Pardelles Cabardes) and it somehow became a personal challenge to walk all the way in one day.  I lost the advantage of a 6 o’clock start by getting lost in Carcassone and wasn’t on the trail until 7 and then lost more time when changes to route meant I had to retrace my steps mid-way through the morning.  The walk was interesting non-the-less following the Canal du Midi for the first hour or so before heading north into the mountains.  You have to climb the Pic Nore which at 1211 metres is the highest mountain in the Montagne Noire before dropping all the way down to Mazemet.  By the time I had finished walking, just after nine, I had been on my feet for 15 hours, climbed 1700 metres and covered 56 kilometres.

Spent the next day resting up in Mazemet, an interesting if somewhat run-down old textile town.  I stayed at the Cheval Blanc, a very friendly Chambre d'Hotes.

Nice easy walk to Angles, a bit of a climb once you have left the Mazemet suburbs, then up through lush forest, with huge pine trees, and the occasional flower laden hay meadows.  Angles is nice old mountain town with a Gite d'Etape.  Shared the Gite d'Etape (La Source) with a group of French walkers who were travelling the other way along the St James Way.

Another very gentle walk the next day, a bit of road walking, but more lush trees and meadows.  There were lots of walkers along the St James Way but all coming the other way of course.  There were  plenty of opportunities for wild water swimming and this makes the area popular with French holiday makers.  I stayed at the Auberge de Epinouse which was just wonderful, great food and good value.

The walk next day was a bit disappointing but I was following an old version of the GR71 and the latest one might be better.  During the middle part of the day my route went through some ugly commercial pine forests.  I stayed at the Auberge de Fau, about a kilometre south of the route, a working farm with a restaurant and auberge attached, it was really excellent, another amazing meal.

Much better walk to Ceilhes-et-Rocozels , mixed open and tree walking, through the lovely village of Melagues and then down to the lake at the little.  Great place for swimming and wonderful food at the Hotel Restaurant Bessiere.

I experienced more route redirection just outside Ceilhes-et-Rocozels where the original route takes you high up along the side of the valley, and the new path takes along the road.  The walk gets better once you get to the village of Roqueredonde when it goes cross country perhaps along an old route to Lodeve.  I met some red shirted volunteers who were doing some route maintenance and they confirmed that parts of the route rely on landowner goodwill and that sometimes this goodwill is withdrawn.  It then takes time for updates to work their way through the system into maps and topoguides.

Lodeve sits astride the Lergue River and has an ancient centre with a Cathedral.  The towns feels a little bit rundown but there are plenty of places to stay.  I stayed in a converted cinema but I wouldn't give it a particular recommendation.

Email ThisBlogThis!Share to TwitterShare to FacebookShare to Pinterest
Labels: E4 through France, E4 through the Montagne Noire, Hiking in France