Stage 8 - The E4 through the Cevennes and the Ardeche 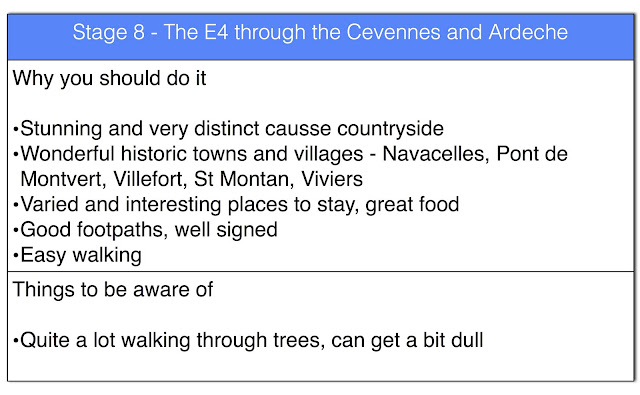 I was very much looking forward to his stretch of the E4.  The route takes you through the Cevennes and the Ardeche, distinctive parts of France both with a reputation for good walking.  The Cevennes and the Cevennes National Park are on the eastern side of the Massif Central and run from the Montague Noire (Black Mountains), which I crossed  a week earlier, through to the Monts du Vivarais.  If you drive through France it's the place where signs on the side of the motorway point out the watershed between the rivers which flow west to the Atlantic (the Loire and Allier) and those which flow into the Rhone and south to the Mediterranean.  With its limestone geology the area is also famous for its massive gorges, in particular the Gorge du Tarn.


In France the Cevennes have a reputation as a hard and austere place.  Some of this is to do with the geography, with the limestone producing dry, sometimes barren uplands (known as the causses), and some of it is to do with the people.  The locals are  mostly Protestant with a history of conflict against the Catholic French majority.  Indeed there are definite echoes with the Cathars (see Stage 7) further south with the Camisard revolt (an Occitan word for shirt) a less bloody version of the Albigensian crusade.

Legends also reinforce the feeling that the Cevennes are really another place.  La Bete du Gevaudan was a wolf-like monster (a she monster) that terrorised the area, killing 100 people between 1764 and 1767.  This is a huge story in France, possibly an influence for the wolf in Little Red Riding Hood, which has not secured the international reputation it deserves.  Despite the best efforts of the French Dragoons, the monster was never captured or killed and its precise nature remains a mystery.

Although the E4 route crosses the famous Stevenson trail it is generally some distance from it (further to the south in the Cevennes).  It's a shame because "Travels with a Donkey" is a classic long distance walking book,  the first perhaps to promote hiking as a recreational activity.  It also established the Cevennes as one of the world's iconic walking destinations.


After the Cevennes the E4 takes you down through the southern end of the Parc Naturel Regional de Mont d'Ardeche, cut through by the famous Gorge D'Ardeche.  The Gorge, sometimes with cliffs up to 300 metres cuts through, in a really dramatic way what would otherwise be fairly gentle countryside.  It must be one of the popular places in France for canoeing and the Pont d'Arc, a natural stone arch over the Ardèche River, one of the most famous beauty spots.


There is a lot of walking in this area and E4 feels its way through a really complex GR network.  After Lodeve it follows the GR7 (although initially it's on the same route as the GR71) until Barre-des-Cevennes where it heads off along the GR72 into Villefort before heading east on the GR44 to Le Vans and then along the GR4 to Vallon Pont d'Arc.  It's confusing around here and there are variants which might provide a more direct route but I carried on along the GR4 until it joined the GR42 at Sant Martin d'Ardeche, where I walked north until I got to Viviers and then crossed the Rhone to Chateauneuf du- Rhone on the GR429.


The first day, out to La Vacquerie et Saint-Martin-de-Castries is a really nice stretch of walking although I initially struggled to find the route out of Lodeve.  Confusingly it crosses the river and then heads south rather than north east.   It shouldn't have been too difficult to find because, as well as the GR71, you're also sharing the route with the GR653 and the Pilgrim's way.  You leave the confusion of the other routes at the pretty village of Fozeires and after climbing up through trees you start to get into the open scrubby causse countryside characteristic of the Cevennes.   La Vacquerie et Saint-Martin-de-Castries is a lovely village where I stayed in a nice bed and breakfast (Le Relais des Faisses) and ate really well in the Auberge des Causses in the village where the accommodation looked excellent.

Fabulous weather next day and a fabulous walk.  Across the flat upland plain, the Plain de la Barre, to the lovely village of St Maurice Navacelles (which has a Gite d'Etape) and then into the stunning Gorges de la Vis.  A 7 kilometre walk along the side of the gorge before dropping down to the pretty village of Navacelles which sits at the bottom of an amazing feature, the Cirque de Navacelles. Stayed at the Ammonite guest house in the village and Christine swam in the river, very nice.


After climbing out of the Gorge and enjoying amazing views of the Cirque the walk fizzled out a bit. Nice walk to Blandas (if you go into it you have gone too far) and onto Montardier (a lovely town with accommodation but undergoing massive reconstruction when we were there), after which you have to endure a grim stretch along a road past a series of stone quarries.  Good walk down to Aveze at the bottom of the valley through a forest of sweet chestnuts, but then some more road walking before arriving in Le Vigan.  A nice town but the hotel we stayed at, a Logis, on its edge, was not good.

The objective next day was L'Esperou, it was a very humid day, and although it wasn't that far it did involve about 1300 metres of climb so quite tough.  Once you got through the suburbs of Le Vigan past the pretty little town of Aulas it was up and up.  Lot of tree walking but things started to open up a bit as you got closer to the little ski resort of L'Esperou.  Found a very nice hotel. the Hotel L'Esperou, good food and good value, faith in French cooking restored after the disappointment of the previous evening.

The weather next day spoilt what would otherwise have been a brilliant walk. On a perfect day you can apparently see both Canigou and Mount Blanc from the top of Mount Aigoual but the day I went up it was pouring with rain.  There was however a brand new refuge, a good place for a coffee and a great place to stay.  After that it was a descent along a forest trail down to a refuge at the Gite d'Etape D'Aire de Cote and then a long easy walk, again through trees, until you hit a small quite road.  After a short walk you leave the road and then follow a lovely open ridge walk until once again you hit a road. The  Gite d'Etape at L'Hospitelat is on the junction with the road and staying there was a unique experience, very primitive but good fun and great food.

Another good day's walking (although perhaps too many trees) to Pont de Montvert.  Just a bit of road walking at the start but you leave this before you get to Barre-des-Cevennes which is a really interesting town with more comfortable, but perhaps less interesting accommodation, than L'Hospitelat.   Leaving the Barre-des-Cevennes on the GR72 you walk through scrubby woodland before descending down to Cassagnas and then climb up again to the Col du Bouges.  The route actually turns east at this point but I carried on north to Pont de Montvert to find accommodation.  Good choice, a wonderful town full  of hikers and cyclists - stayed in a Gite d'Etape but good choice of hotels.

Following a GR72 east of Pont de Montvert (there are two GR 72s I took the one which goes to Le Merlet) you climb up through nice open countryside to the Plain du Tarn, the source of the River Tarn.  It's a wonderful upland plain,  full of cattle enjoying what at this height (1300 metres) must have been new spring grass.   You're right in the middle of the national park and the trail takes you to a park centre at  Le Mas de la Bargue before you again start to descend through dense trees towards Villefort.  Just before Villefort the countryside changes into open moorland with great views west to the Vercors.  It's then a knee crunching descent into Villefort where we stayed at the Hotel Balme, a classic French hotel.


Descending down to Villefort & through the village of Brahic

Along this stretch the weather went from heavy drizzle to heavy humidity, sploit what would otherwise have been good walking.  First stretch, after a bit of a climb from Villefort, was on a forest trail but through a lovely forest increasingly dominated by sweet chestnuts.  It then opens up into a ridge walk along the top of the Serre de Barre before a meandering descent, with some road walking, back through trees to the pretty hillside village of Brahic and down to Le Vans.  Le Vans is a nice French town, plenty of places to eat but I could only find one hotel, a motel really, clean but not much more.

Really interesting stretch of walking next day spoilt by really bad weather.  Heading east out of Le Vans you cross some classic dry limestone countryside, through scrubby trees, before finding yourself up on the edge of the Gorge D'Ardeche - great views.  You then cross an intensely farmed agricultural plain, visiting the pretty villages of Berrias and Comps before climbing back into the mountains, again meandering through scrubby forest and eventually arriving at Vallon Pont d'Arc.  Stayed at Le Manoir du Raveyron, very nice, great food.  Didn't see much of the town, pouring with rain and I was very wet.

I'm still not absolutely sure where the E4 goes from this point.  There is GR4F which goes north of the gorge from Vallon Pont d'Arc or a GR4 which goes south of the Gorge to St-Martin d'Ardeche.  Both join up with the GR42 the next part of the route.  Seeing a rare E4 sign in the forest next day suggests the GR4F but I went to St-Martin D'Ardeche.  Either way I think you walk close to the Gorge but frustratingly not close enough to see it.  My walk took me through more of the scrubby forest, a mix of pine and evergreen oak, which I must admit was starting to get a bit monotonous.  Visited the pretty village of Labastide-de-Virac where I took the GR4b rather than the correct GR4 (so may have missed a bit of gorge) before arriving at the very pretty villages of Aigueze and St-Martin D'Ardeche. Stayed at the Hotel Bellevue although there is a big choice.


St-Montan and the Roman bridge before Viviers

Last day before crossing the Rhone and the weather was better.  Lot of variety on this stretch, now heading north on the GR42.  Initially through vineyards and nice cultivated landscapes I was soon back into the scrubby forest from yesterday.  After several kilometres of this, things open up again and you arrive at the gorgeous little town of St-Montan, castle, restaurants, everything. After St-Montan, after a little climb, it's a lovely easy walk to Viviers which you reach after crossing a perfectly preserved Roman bridge.  Viviers, a small town with a cathedral, looked wonderful and was the obvious place to stay, but I wanted to cross the river and went to Chateauneuf-du-Rhone where stayed at the grim Hotel de la Poste and ate pizza from the takeaway.  Not a recommendation!

Taken as a whole the E4 through the Cevennes/Ardeche was excellent despite the dreadful weather.   I particularly liked the Cevennes and will definitely be going back there, will try and find some more of that big open countryside and perhaps try and avoid the trees.