Coming Up for Air

Have now been home for a week and it almost feels like I have never been away. The initial shock of discovering that life went on when I wasn’t here has subsided and I have almost got used to all the redecorating that was done in my absence.

After surviving for over six months without anything going wrong physically things really fell apart in my first week home. All of a sudden I was exhausted, absolutely knackered, got my first cold of the year and had an awful headache for three days. Worse was the ache in my feet. They were hurting so much that I started to worry that I had done some permanent damage. Have no idea what was going on but they have been a bit numb for some time so maybe it was just some sort of recovery process.

Anyway going into the second week at home I’m now starting to feel better. An issue is body shape which has changed a bit. Have dropped from 12 to 10.5 stones, a 10 kilogram weight loss, and have had to buy some new jeans. To be honest I feel better being lighter but if I’m not walking 30 kilometres a day the weight might just come back.

Talked to my doctor about Lymes decease and he said that symptoms would have presented themselves by now and we decided that it wasn’t even worth having a blood test.

The biggest recovery manifestation is that I can now start to think about what I want to do next. Had lots and lots of ideas while walking but couldn’t even entertain them last week. The most tangible and immediate is a trip back to Spain and Andalucia in October to walk to southern variant of the GR7. Have been in touch with Juan Holdago - who I met while walking in Spain and who knows everything about the GR7 - and he has already sent me lots of information. Will put another blog together on the plan when I have the schedule in place.

I’m also trying to clean up the blog pages and maybe, if I have the patience, I’ll try and develop a site which will help anyone thinking of walking bits of the E4 or indeed any of the E long distance trails.

The best thing about coming home is that I have met my grand-daughter, Georgia. What a star, absolutely gorgeous, and I’m afraid that I’m bowled over. 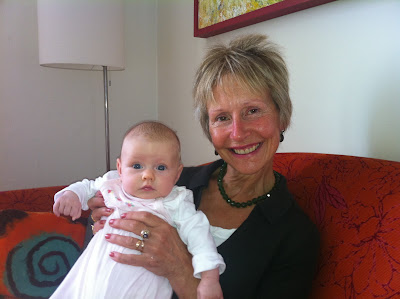 Many thanks for the sponsorship that keeps coming in. Particular thanks to David Pritchard whose promise to sponsor me when I finished was a key motivator and to Andrew and Julia Collins whose support was less performance linked.