Day 1 was a brilliant walk but if anything Day 2 was even better. The landscape the route takes you through was similar to the first day, with the same wonderful trees and brilliant paths, but if anything opens up a bit with the views just a bit bigger.

The day started particularly well with the bill for the accommodation - 32 euros all in, fantastic value - and Juan confessing that his legs ached a bit after yesterday's 44 kilometres. I told him mine were fine which was not quite true but made me feel better.

We were also out in time to see the sun come up through a red sky, excellent start to the day. The sun seemed to trigger of a Hooper bird whose distinct clacking song is, Juan tells me, a harbinger for spring in Spain.


After about 8 kilometres walking along an ancient camino you arrive at the little town of Canaveral de Leon. The scenery then starts to open up, the valley gets wider, and you get some great views back to Hinojales. 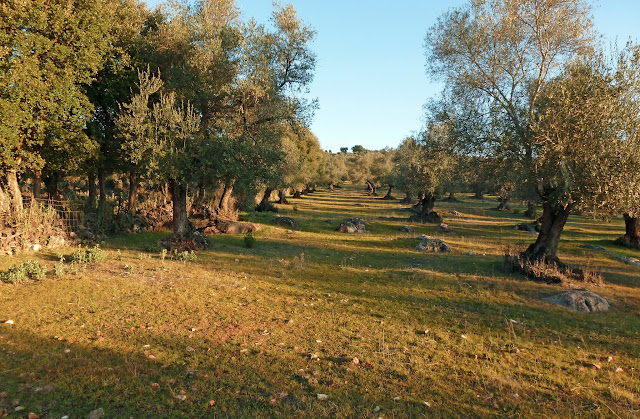 The route then takes you down to the banks of the Rio Montemayor and a particularly nice stretch of river side walking. We meet a man coming the other way and he explains to Juan that the river is unusually low and that the drought has meant that the grazing is very poor and not enough to keep the animals going. It's so tough for local farmers that he hopes more tourists will come and keep things going. Despite the lack of the rain the countryside looks wonderful.

Having crossed a bridge over the river the route takes you into the middle of a wide valley with the large fields populated by a mix of cattle and pigs. At a cross roads on the trail we meet two men and a woman in green overalls, much younger than the average local farmer, and clearly something to do with the government. They had lost four black pigs and in sea of black pigs and asked us to watch out for them. I hope the fugitive pigs made good their escape.

It's then a gentle climb up out of the valley, along a road for a bit before a little climb over the Alto de la Toba Mountain Pass and then down a lovely ancient trail into the town of Arroyomolinos de Leon. Stopped for lunch in a local bar and were so far ahead of schedule that we could treat ourselves to two beers.

The last stage of the walk to Cala is particularly nice. A bit of a climb up out of Arroyomolinos de Leon and then into another huge valley, a bit like the one in the morning. Lots of evidence of busier times in the recent past, abandoned farms, olive groves, water mills as well as the huge disused open cast mine near to Cala itself. The last stretch of the walk, with the sun now low in the sky, was excellent with the sheep in trees enjoying the last bits of daylight.

Got to Cala at about 5.30 and after walking about 37 kilometres. Stayed in a Casa Rural run by the local council which was OK but very cold. The hot water ran out half way through my shower and I thought my heart was going to stop. We enjoyed an excellent meal in the bar across the way although we were the only two in it. Cala has a new hotel but it had not opened when we were there.