Doing Annapurna Circuit and the Mera Peak expedition back to back, it’s hard not to compare the two treks. Employing any rational criteria Annapurna Circuit would come out on top.   The scenery, both in terms of its scale and variety, is better on the Annapurna Circuit.   You're closer to really big mountains, they come earlier in the trip and stay with you day after day.  The landscape also changes from deep river - cut valleys to wide flat bottomed gorges, and from the wetter Indian -facing mountains to the dry Tibetan style terrain in Lower Mustang.  The scenery on the Mera Peak trek is wonderful, really interesting, but you're a long way into it before you have anything that compares with what you get by day three of the Annapurna Circuit. 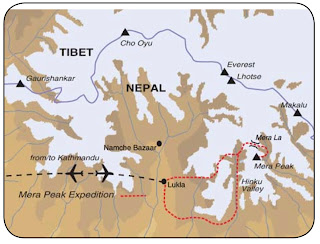 It's my trip to Mera Peak though and not Annapurna which has left the stronger impression.  I'm struggling a bit to understand why but even at my age, perhaps particularly at my age, I think it's the word "adventure" that nails it.  Mera was an adventure and for some reason Annapurna just didn't score on what apparently remains a much more important criteria.


First the confession - I didn't make it to the top of Mera.  Got close and much higher (6225 metres) than I had ever been before but I didn't make the top.  None of us did, events conspired against us, but then it wouldn't have been such an adventure if success was guaranteed.  Although I would rather have got to top this was definitely the next best thing, in fact, if I was going to try twice,  I would have wanted one of the attempts to have turned out exactly like this one.


Like the Annapurna trip,  I was on a trek organised by Exodus and by coincidence with the same Nepalese leader, Jangbu Sherpa, a really experienced guide with an Everest traverse on his CV.  He was good on the Annapurna trip but on Mera I found out what he was really capable of - a really tough guy, very kind and a great leader.

At 6,476 metres Mera Peak is the highest trekking peak in Nepal, in other words you can get to the top without any technical climbing experience.  It sits to the south of Everest and on the way up to the summit you get to see 5 of the six biggest mountains in the world : Everest, Kanchenjunga, Lhotse, Makalu, and Cho Oyu.

There are different ways to get to Mera.  The classic route is the Mera Peak Trail which takes you east out of Lakla and over the 4,500 metre Zatwra Pass on your second day.  You then follow the route up the valley to Gotay, Tagnag and Khare and return the same way back.  Exodus take you on a more roundabout route heading directly south from Lakla then east before heading north and rejoining the main route.  As well as providing more variety it avoids having to go to high altitude at such an early point in the trip and gives you longer to acclimatise.  In practise it adds about three days to the whole schedule and seems to me to make a lot of sense, although I think more groups go on the direct route.

The longer route also gives more exposure to classic Nepalese rural countryside and along a route where trekkers are still a relative novelty.  Crucially you spend the first four days at between 2 and 3 thousand metres where agricultural is still viable and the countryside well populated.  It makes for interesting walking.

Although there are tea houses along the Mera Peak trail most groups camp, and everyone has to camp on summit day.  This means a full scale "expedition" with porters carrying not just your clothes but also all the camping and cooking gear.  Although it's a non technical trek there is a bit of climbing on summit day and, as a consequence, a whole pile of climbing gear also has to be transported.  With just 7 in our group we needed a support crew of over 20 people - porters, kitchen porters, cook, two guides, a climbing sherpa and Jangbu the tour leader.

Nepal has 2 walking seasons, one in the autumn and one in the spring.  October and November are the peak months with December and in particular January and February usually considered too cold.  Trekking starts again in March and April but its not usually as clear as in October and November. There are pros and cons for both seasons.  People usually tell you its warmer at night in the spring than the autumn and that it's less busy.  For my group less busy meant that we ate our food inside the tea houses rather than mess tents - in my experience mess tents at altitude are not nice places and very often the only place to get warm is in your sleeping bag.  Tea houses are much nicer.

Still the weather had a huge influence on my trip to Mera Peak and if it had been better I might have got to the top.

So what happened, what did it feel like and why was it such an adventure?

Until the day before summit day and summit day itself everything had gone well.  The group of 7 walkers got on with each other - we had been at altitude, found the gaps in our gear and had made the necessary adjustments needed for when things got even higher.  We had completed our acclimatisation, practised with climbing gear and, approaching the final climb, everyone was in good form.  The weather had been OK if not exactly brilliant, and a pattern of good weather in the morning and poor weather in the afternoon was one which we all expected and had got used to.
The climb up to High Camp was tough and one of the group had a bit of altitude sickness and had to return to Khare.  Everyone was tired but glad to be in their tents at about 6 in the evening, eating food and getting the final briefing from Jangbu about the climb next morning, including details of the 1'o'clock wake up call.

Things then begin to happen and the trip becomes an adventure.


The wind started to blow at about eight o'clock and it's soon a gale.  Not being an experienced camper, I didn't know that a tent could withstand such a battering. Perched high up on the edge of glacier I felt that collapse was inevitable. The gale carried on for two or three hours and then the wind dropped and was replaced by thunder and lightening - the likes of which, living in the UK, I had never seen. The storm’s intensity was incredible with lightening providing almost constant illumination inside the tent. The wind finally stopped and then, in the middle of the night, our tent was shaken violently by one of the guides who had ventured out to knock snow from the buckling tents.   And then, as if nerves hadn't been stretched enough, the wind returned and the battering resumed.

The wind eventually died down but needless to say we never got the scheduled 1 o'clock wake up call and the attempt on the summit seemed to have been kicked into touch, with two, nearly three feet of deep new snow on the ground outside.   At about 6.30 am I climbed out of the tent and found Jangbu thinking about what to do - the weather was still poor.   Going down seemed the only option but even that wasn't straightforward.  We only had a few kitchen porters with us, not enough to carry out all the gear, and the dangerous crevasses on the glacier were now covered with snow.

We started to prepare for the return trip but without any great urgency.  The weather then began to improve and there was just the chance that we might get some views.  Jangbu suggested we "go for a walk" - not a summit attempt but a walk up the glacier to see how far we could get.  Four of us took up the suggestion and two stayed back at High Camp.

I had not walked in deep snow before, never mind deep fresh snow at 5,800 m and it was hard following in the "footsteps" of one of the guides who, by breaking the trail was doing the real work.  He was also being careful, prodding the ground in front of him with his ice-axe checking for crevasses.  Despite his caution however, and less than 100 metres from the camp, he missed one and the trail gave way underneath my feet. I found myself up to my arm-pits in a hole without a bottom. As I was roped up, I was out of the crevasse almost as quickly as I had fallen into it; maybe it was the altitude but somehow I wasn't shaken. When Jangbu asked if I wanted to carry on I didn't hesitate.
After an hour or so the walk up the glacier somehow turned into an attempt on the summit, with the job of breaking the trail rotating between the four trekkers and the two guides.  Progress was good until, at the crest of the glacier, we hit a bank of deep soft snow. Climbing up and through it drained our energy, but at the top of the crest we found an even more fundamental barrier - two long parallel crevasses which, in the poor visibility, it's difficult to see how we get around.  Someone suggests we try to jump but while Jangbu clearly wants us to get to the top he thinks it's far too dangerous - he reminds us he has two children back in Kathmandu.  After some more discussion we all agree to turn back - I check the altitude on my Iphone,  we turn at 6,225 metres, just over 200 m short of the summit.

We were back at High Camp at about 3.30pm, too late to go down so we ended up staying two nights rather than one at 5,800 metres.  We were lucky because the weather next morning was perfect and the views we got of the big five, including my personal favorite Kanchenjunga, were the best we could have hoped for.  Walking down was relatively easy but I was feeling the altitude and for once really struggled to stay upright.   The sun in particular was so strong that despite gallons of sun-block my skin seemed to be melting.

The trip wasn't over - we still had to get down the valley and then up over the Zatwra Pass before getting back to Lukla.  The weather still had twists and turns to make and there was another smaller storm the night before we crossed the pass. We then had to endure the anxiety of flight cancellations and being stranded in Lukla,. We found ourselves hanging around for a day and half waiting to see if the weather would hold long enough to let us get out, surrounded by people whose flights had already been cancelled.

A lot goes on with a trip like the Mera Peak expedition and the difference between the experience and normal life is particularly extreme.  At times it was cold and uncomfortable. About half way through the trip, and after nearly five weeks in Nepal, I was really missing home and had started to count the days.  You then have a experience, shared with a group of comparative strangers, that becomes etched on your mind and creates a memory that creates a clear distinction between a "holiday" and an "adventure".

I kept a diary of my Mera Peak adventure and this has a lot more detail on what the trip was like, particularly at a more practical level - please have a look at it if you're interested.  The links are below: