There were clear signs today that the walk was beginning to fizzle out. The scenery was less dramatic and the number of other walkers dropped, despite wonderful weather and the fact that it was the weekend. At lot of Germans on the Hohnweg don't seem to bother with the last two days.

In terms of the Via Alpina schedule, today's walk combined two stages and was a big day 30 kilometres long with 1500 metres of climb. The target was the Schultzhutte at Feistrizter Alm, a hutte I hadn't been able to contact until at the last minute before we left Nassfeld the receptionist at the hotel managed to book it for us. We knew it was going to be small and remote.

The eastern Karnischer Alps are not as high as the western, everything is about 500 metres lower and as a consequence much of our route was through trees. There has been very little tree walking on this trip and it made a change to have the views so limited. You had to concentrate more on the navigation as well as the route has occasionally been destroyed by forestry work. The GPS trail on the IPhone saved us several times today.
So after escaping the ski runs at Nassfeld we headed east through trees along a step sided gorge and over a pass to Egger Alm. After strudel (me) and some weird cheese soup (Christine and Paul) we walked up a valley through meadows, past another village before climbing again through trees over another pass. At the bottom of the next valley was a nasty little gorge which demanded at bit of rope work and this was followed by a tough climb up to the top of the Starhand Pass which at 1900 metres was the highest point of the day. Another steep descent down to the lovely little Starhand Gasthof (would have been a good place to stay overnight),some more refreshments, and then we set off for the final climb up to Feistrizter Alm. Christine shot off down the wrong trail heading south into Italy, but once we got her pointed in the right direction we had soon finished the climb, it was a lovely evening for walking, beautiful late summer light. 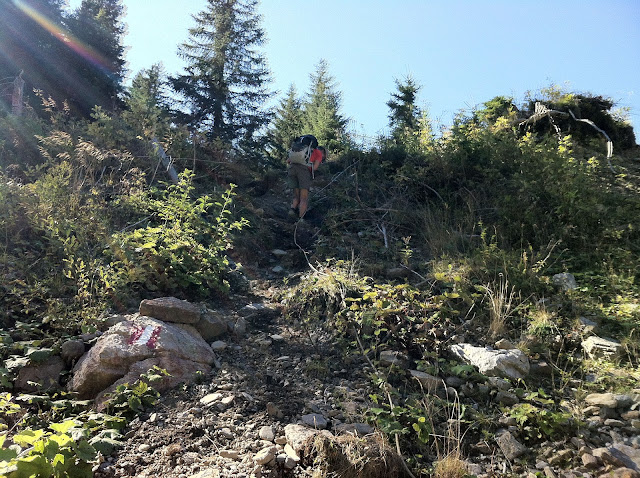 Actually one of the features of today's walk was Christine's turn of speed. After getting a little tired earlier in the trip (I was starting to think she had permanently "lost a few yards") she now back to her best form. She absolutely shot up the 600 metres to the top of the Starhand Pass although part of the pace was driven by the mistaken belief that there was going to be a strudel stop at the top.
Arriving at the Feistrizter Alm, a tiny hamlet high on a pass, we struggled to spot the hutte but were struck by a noisy group of young people who had clearly been drinking for some time. One of them, a really helpful 20 year old called Kati took us into a small building at the edge of the village which turned out to be the Schultzhutte. Apart from Kati no one seemed to speak English and no one was expecting us. Everyone it seemed had been drinking all day.

After some farcical discussion about whether or not we had a reservation we asked if they could put us up and of course they could, although the room, even by hutte standards was primitive and there were no washing facilities. They could also feed us.

There were two excuses for the drinking. The young people were all trainee police men and woman from the police academy, up on the mountain for some team building. They had been drinking since 10 am and were all generally staring into the middle distance. Secondly the cows, who had been on their summer holiday in the Alm had today all gone down the valley to prepare for winter. The herdsman, Christian he was called, was particularly drunk.

We had a simple but delicious evening meal, the best ever goulash soup followed by a trencher of mountain ham and cheese. Kati seemed to enjoy a brief respite from the drinking and was soon practicing her English on us amidst fits of giggles. She said she was happy as a trainee police woman and loved the academy. Christine asked her if it was hard to get in, she said it was, you needed to be able to do 12 press ups but she could do 20.

The star of the show though was Christian who spent about 30 minutes trying to explain to us how a brown bear from Solvenia had killed 12 of his sheep. Being blind drunk he was somewhat difficult to understand and was frustrated because we confused his reference to the brown bear with the large wild boar skin, complete with head and tusks, hanging on the wall.

The final embellishment was provided by multiple rounds of strawberry and apricot flavoured schnapps . We drank them in the traditional way, down in one with a scrunched up face.


- Posted using BlogPress from my iPhone
Posted by John Hayes at 8:23 PM

Email ThisBlogThis!Share to TwitterShare to FacebookShare to Pinterest
Labels: Red Alpina; Via Alpina