Apart from the fact that I seem to have lost, for the time being at least, the ability to publish yesterday's blog, everything went well today. Chris is definitely speeding up and we managed to get to Badia Pratagalia when we expected to.

We left Chiusi La Verna at about 8, a lovely morning but with a touch of autumn chill in the air. 40 minutes later we were up at the La Verna Sanctuary, a place where St Francis stopped for more than just the odd night. Because I had shorts on Chris insisted that I stay outside while he went inside to take a few pictures. The nuns were sparred my knees.

In the season, and judging by the size of the car parks, the Sanctuary is a big draw but in early October, just before 9, it was totally empty. Chris said good morning to a monk who politely replied probably breaking some vow of silence.
Today was just a very relaxing walk. Almost a contour walk we hardly ever got above 1200 metres or fell below 1100. Sticking to a ridge, the walk followed a wide sweeping arch. Occasionally , through gaps in the trees, the deep valley to the east was visible, but for the most part all we could see were the beech and oak trees. Not that I'm complaining, the autumn colours were lovely and the leafs on the ground made walking a treat. 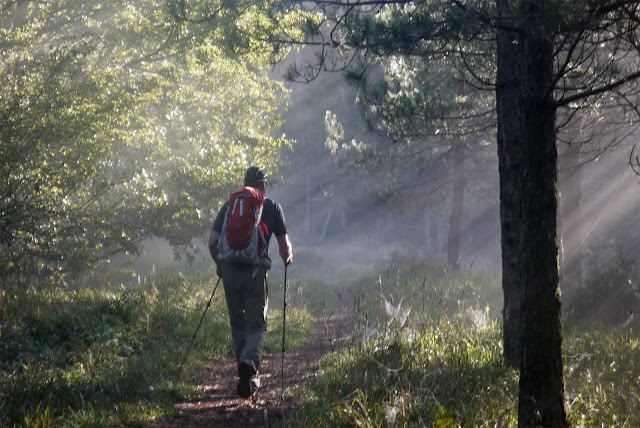 For the first time today we didn't see any pilgrims but instead shared the path with elderly Italians, with baskets lined with fern, out gathering funghi. Funghi were everywhere but most of the baskets were empty, they were clearly looking for something special. 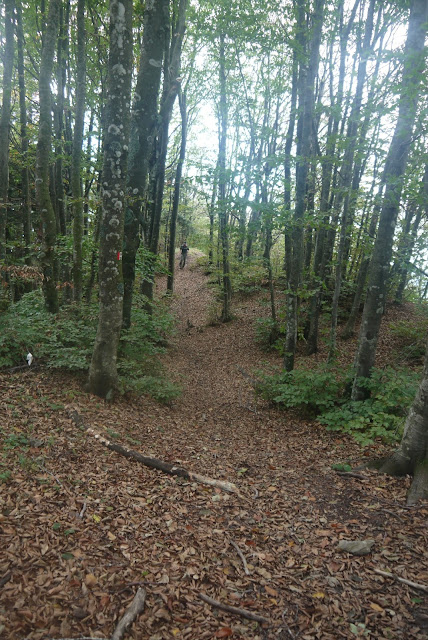 At Passo dei Mandrioli, and after about 18 kilometres, the ridge walk came to an end and we hit a busy mountain road. Somewhere, just around the corner we should have found our path down but missed it and instead walked along a very bendy road to Badia Prataglia. Most of the accommodation in what feels like a fairly rundown resort town was shut for the season. We're staying in the Hotel Bellavista, a hotel where the temperature of the hot water does not exceed tepid.


- Posted using BlogPress from my iPhone
Posted by John Hayes at 6:07 PM