To Ditchling and back

When I wrote the last Brighton Walk blog we were enjoying a rare two day window of perfect late autumn weather.  It didn't last long,  the rain returned and seemed to fall non-stop for a week.  Well the sun came out today again, wonderful, but it was a sun which had lost any remnants of heat.  Winter has arrived on south coast and we got our first proper hard frost.  It was a perfect day for a walk - the only challenge was escaping from a lovely warm bed.
Having filling a flask with coffee (after years of arguing that a flask was a bit "geriatric" I'm now a convert) - we jumped on a 24 bus and headed off to Falmer (next to Brighton and Hove Albion Football Club and the University of Sussex Campus).  After getting off the bus at the University, walking for a 100 metres or so, we were in middle of trees and in the countryside.

At St Mary's Farm, which nestles at the bottom of a shallow dry valley, we chose the footpath to the left and headed north-west along an old green lane up towards Ditchling Beacon.  It was about 10.30 but the sun was low in the sky producing long shadows across the gently contoured landscape. Theoretically Christine wasn't at work today but there was still a little black thing clamped to her ear on a semi-permanent basis.

We hit the South Downs Way just to the east of Ditchling Beacon (third highest point on the Downs and the site of one many South Downs iron age hill forts) and headed east towards Lewes.  The views were amazing and even on a Friday there were lots of people out making the best of the weather.

Leaving the ridge after about a mile we headed down towards Plumpton.  The ridge is relatively steep around here, and we dropped immediately into a colder shaded world.  It's amazing to think that there is a long stretch of countryside, underneath the ridge, which isn't going to get any sun until well into next year.

Plumpton proved to be the only disappointment of the whole walk.  I was hoping to get a glimpse of Plumpton Manor, an Elizabethan manor house, but you can't see it from the route and it would have to be one of the seven wonders of the world (and not just Jimmy Page's old house) to justify a route deviation.

Out the shadow of the ridge the sun, weak as it was, was melting the frost and the green lane we were walking along had turned decidedly muddy.  Had no idea what to expect but we escaped the mud as soon as turned west at the little hamlet of Ashurst with the route following a tiny tree lined greensand ridge along Sussex Greensand Way - the route of an old Roman road.

Streat, about a mile along the track, has an imposing 17th century manor house and an altogether more intimate little 11th century church.
As a rare treat we stopped for lunch (bowl of soup) at the Bull in Ditchling (it gave Christine a chance to catch up with her emails). After a short walk through the village and a fiendishly hidden exit at a junction, we set off across cold muddy sheep filled meadows followed by a climb up an icy scarp before arriving back on the top of the ridge bathed in the dying embers of a wintery sun.   Still had a long way to go.
There is lots to see around here but time (and light) meant missing the attractions of the Jack and Jill windmills and heading straight down to Pyecombe and across the bridge over the busy A23, the main road into Brighton from London, and up over West Hill and down into the lovely little hamlet of Saddlescombe.  It's a National Trust property, a preserved example of a downland farm, and is just so interesting.  There is even a place to have cake and a cup of tea - the Hiker's Rest.

No time to stop though, the light was really beginning to go and it was getting cold.  Leaving Saddlescombe the route follows the South Downs Way up along the edge of Devil's Dyke, the deepest dry valley in the UK (a very interesting place the description of which I'll save for another time).  Heading south, back towards Brighton, we cross a golf course before heading along the route of the old railway line back into the City itself.  The setting sun is stunning but it's too cold to look at it for long.  It's dark by the time we get home at about 4.30.  An 18 mile walk and highly recommended. 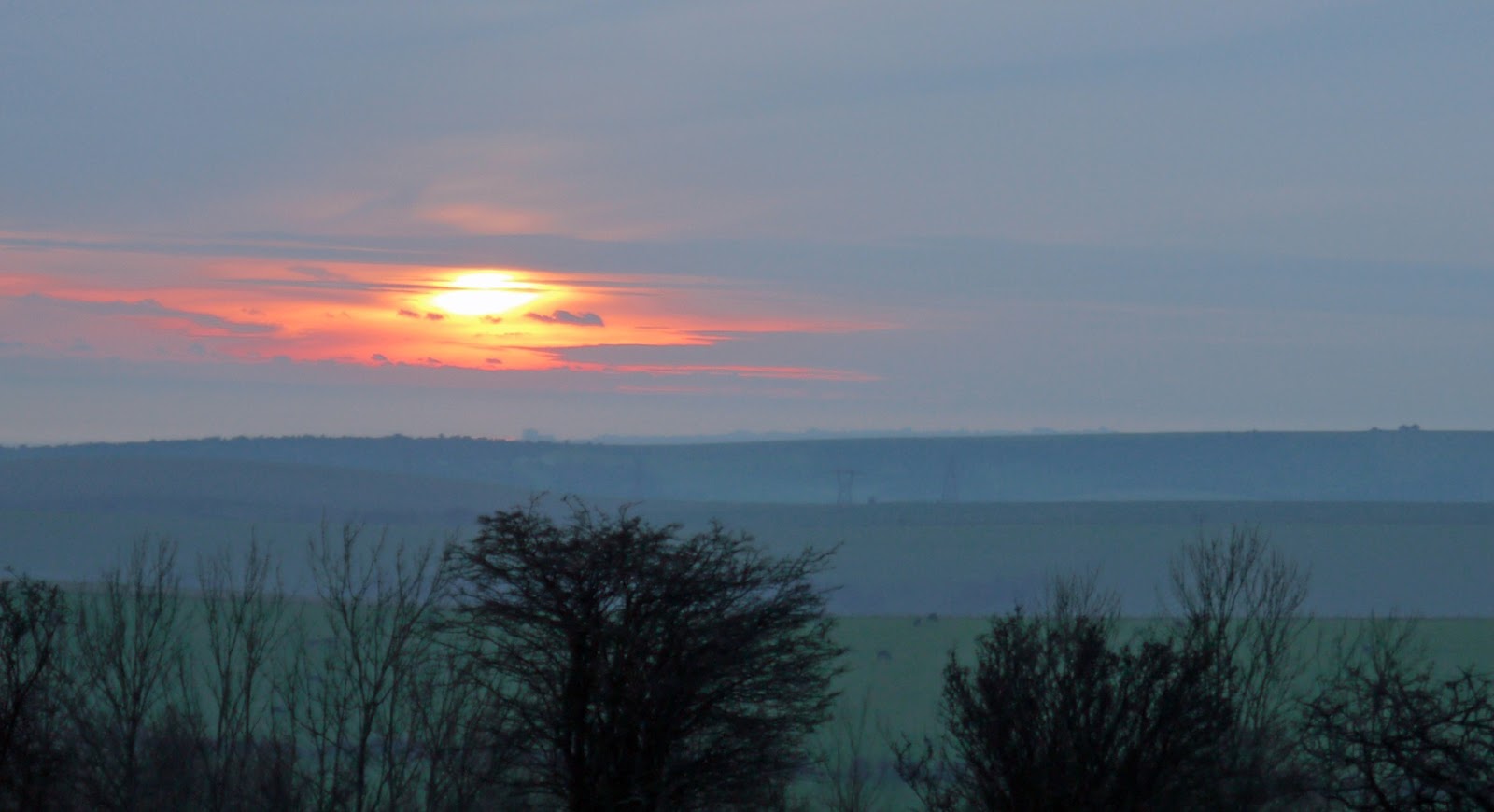