Doesn't feel that I've done a full day's walking when I finish at 2.30, particularly when weather is as perfect as it was today. Got another short one tomorrow as well!

I stayed in a casa rural in Bolea and Isabel, the landlady, couldn't stop laughing despite the fact that we didn't understand a word each other were saying. She rang her daughter this morning just to ask me if I wanted to take a sandwich, and then rang her again to find what I wanted in it. What a pain the language barrier is.

Like yesterday the GR1 has been rerouted. From Bolea until it crosses the pass at Paso de Nieve it follows the same route as the Camino Natural de la Hoya de Huesca and then reverts to its original route.

The first two thirds of the walk in particular are excellent. From Bolea you head north back to the mountains. After crossing through fields of almond trees and a gauntlet of barking dogs, you head up a valley and past the tiny Ermita de la Trinidad. Today the valley funnelled cold air down from the snowy tops of the mountains, it was blowing a gale.
The route then goes up the left side of the valley on a well marked path through pine trees. Every so often the trees open up and you're treated to increasingly spectacular views back down towards Bolea and across the huge flat plain beyond. It was a very clear day and the countryside was intensely green.
There were some particularly nice signs on the way up warning you to be careful about crossing the streams, well at least I think that's what they said. 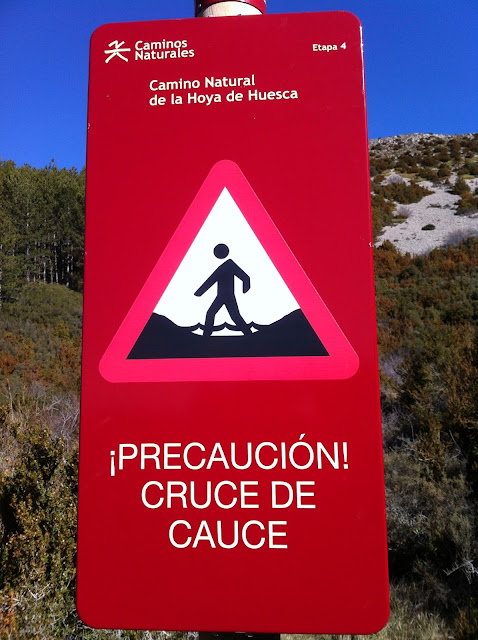 Eventually you reach the Paso de Nieve, appropriately named because there was still a covering of snow. At this point the GR1 leaves the Camino Natural de la Hoya de Huesca which takes a more direct and possibly more scenic route to Arguis.

The GR1 heads north and down a steep sided valley. It's a tight trail, probably an old mule path, and great walking. Eventually the valley opens out and the path turns into an old road taking you into the village of Bentué de Rasal. There was no-one about and I doubt there are any full time residents.
The GR1 then joins a road which climbs gently up a valley and takes you all the way to Arguis. It's a very pretty valley but walking all the way on a road is a bit of a disappointment (although I only saw 1 car in about 90 minutes of walking).

It remains a mystery to me that someone has taken the trouble to reroute the GR1 but in a slightly half hearted way. As the GR1 walker I feel disloyal saying it but the designers of the Camino Natural de la Hoya de Huesca, which avoids the road on its route from Bolea to Arguis, do seem to have done a better job.
Anyway I'm staying at a very nice hostal which is just to the south of the village. Was tempted to have a boozy lunch, resisted but when I flopped on the bed in my room it collapsed under me. Clearly rumours of intense loss of weight have been greatly exaggerated.

- Posted using BlogPress from my iPhone
Posted by John Hayes at 6:42 PM