Arriving at Reinosa marks a transition point in the walk - very much the end of a stage.

Firstly at a distinctly unremarkable spot we crossed the watershed between the River Douro, which flows to the Atlantic, and the mighty River Ebro which flows to the Mediterranean. In one respect it's downhill all way although I've still got something like 900 kilometres to walk.

Thirdly the run of good weather I have enjoyed for the first 4 days looks like it has come to an end. It's now milder and rain is forecast tomorrow - in places the route is already a quagmire and with the amount of snow on the ground it will probably get worse as a thaw kicks in.


Finally from tomorrow I'm on my own as Juan makes a well timed return to Madrid. I won't be seeing him for another 2 and half weeks when he comes back to the trail with Christine who is walking the last two weeks of the GR1 to the Mediterranean. Despite finding my way (almost) for 5000 kilometres across Europe it's going to be strange to take responsibility again for my own navigation.

In other respects today's walk was perhaps the least remarkable of the four to date - although I now know a lot more about the horse breeding business and I think I have gained the freedom of the town of Brañosera. 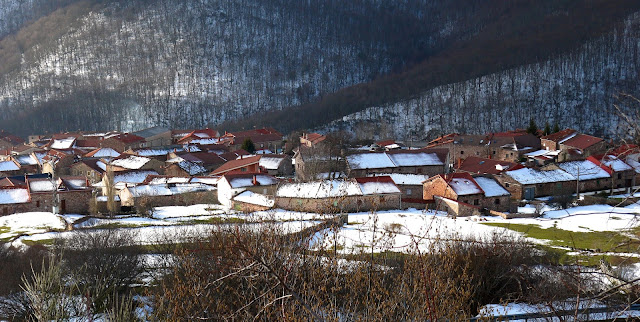 Not so far to walk today so a slightly more leisurely start - in other words time for breakfast. Cholo our host explained to us the benefits of rearing horses for meat over cattle. Apparently they can withstand the cold better and are less prone to disease. Not sure what the collective noun is for a group of horses but he had one and as soon as he had fed us went to feed them. They're a special breed of Breton horses, brown in colour with a light brown mane and tail, and developed to be eaten. You live and learn.

The first part of the walk was lovely, blue sky and good views. Lots of snow but frozen. Climbing up over a ridge we descended into a huge moorland bowl, good walking and the pass we had to cross clearly visible to the north. 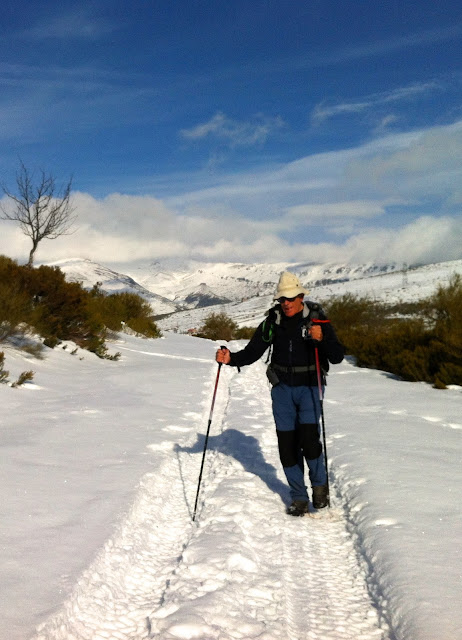 Juan came a different way last time so wasn't really using his GPS trail but the way marks were good. We crossed over an ancient and muddy bridge, found a sign and followed the trail it was on. That was the last sign we saw. The general rule is that there isn't a sign unless they want to send you in another direction -trouble was we were going down a muddy road in the wrong direction. Eventually we worked out what had happened and just made for the pass - welcome to Cantabria.

The pass marked the watershed and today it was a grim place, a large empty road and a freezing cold wind. Amazingly we spotted another walker coming up the hill and it suddenly felt crowded. 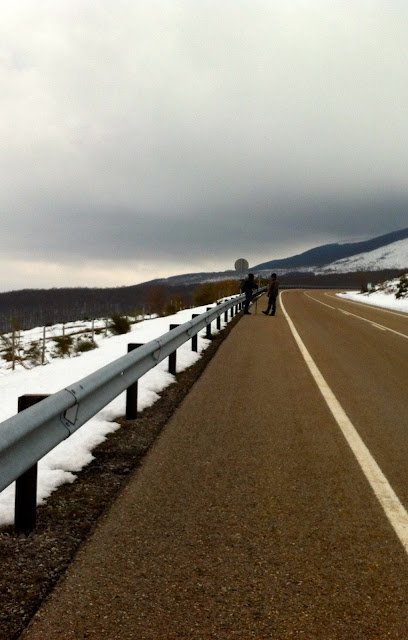 Apparently the GR1 stays on this road for 5 kilometres before heading off into some country lanes. The country lanes were deep with wet snow and for once the road was the more attractive option. The landscape was dramatically gloomy the white/grey of the snowy mountains blending into the grey/white of the clouds. To match the weather we talked of "the crisis" (the expression everyone here uses to describe the recession) and the terrible tragedy which is being inflicted on the young people of Spain suffering from 50 per cent unemployment. The latest numbers released today confirmed that things are not improving, another 50,000 joined the dole taking the total to well over 5 million - twice that of the UK in a country with a much smaller population.

After sharing our journey with a suicidal dog, burning feet proclaimed that enough was enough and we stopped at a roadside cantina a hundred metres or so past the official
source of the River Ebro.

An hour later we were joined by Mayor Rodriguez, the politician in charge of Brañosera. He presented me with a very smart charter which I think makes me a freeman of the town. If I'm right I will be back with some horses to claim my grazing rights. More importantly the Mayor is doing his best to promote the GR1 and runs an important website (www.GR1.Branosera.com) to that end. Today the language barrier got in the way of a real conversation but hopefully he appreciates that I'll be doing my best to promote the joys of walking the trail to an English speaking audience. 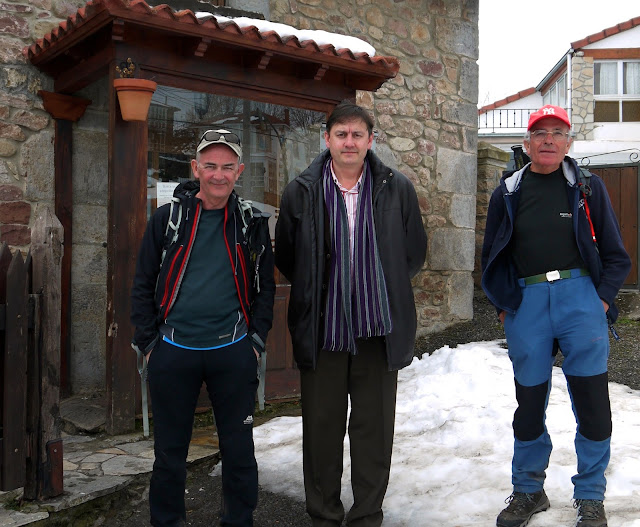