Arrived in L'Escala, the end of the GR1 Sendero Historico on the Mediterranean, at about 5 o'clock. It was freezing cold with a biting north wind, almost as cold as when I started the trip at the beginning of March. Christine's swimming costume was staying put in her bag.

It wasn't nearly so cold when we rejoined the GR1 at Orriols after breakfast. I had anticipated an ugly walk across a coastal plain for the last day but it turned out to be nicer than that.
The countryside was rolling rather than flat, a mix of woodland and arable, very green, and reminded me of Christine's home county Suffolk.


The views of course were better than those in Suffolk. In the distance to the north the Pyrenees were clearly visible and it looked like they had been given yet another coat of fresh snow. 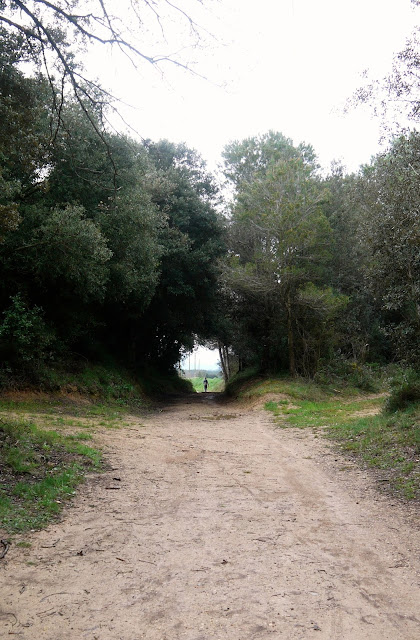 After some seriously confusing way marking (they had put the GR1 sign on a St James's Way feeder route sending you south rather than east) we set off towards Camållera. It was sunny, almost warm and the banks along the side of the trail were full of wild flowers. At Camållera
we stopped for coffee and sat outside in the sun. The toothless man next to us was smoking a distinct type of black cigar and the pile of stubs under his chair suggested he was rooted to the spot. 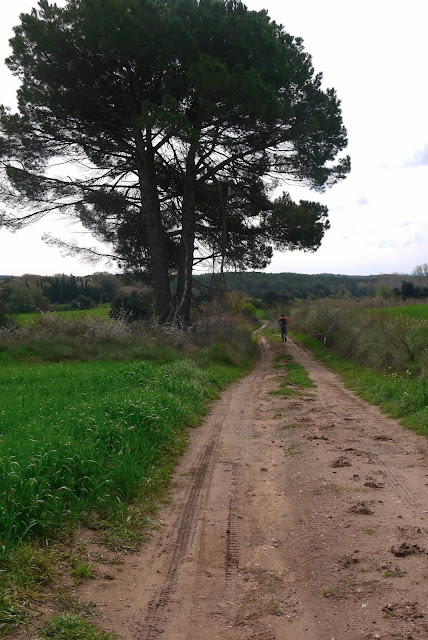 It was even warmer as we left Camållera but just after the pretty little village of Pins someone changed the settings and almost instantly a savage north wind kicked in.

We got our first view of the sea on a little ridge to the east of Valldavià. The beautiful Gulf of Roses to the north-east was clearly visible.

There was lots of activity in the woodland round and about, people with bags looking for things. The treasure they were hunting turned out to be wild asparagus and a couple of particularly successful gatherers were more than happy to pose with their bounty.

By the time we got to Viladamat Christine was frozen and insisting on lunch. We stopped at a restaurant on the edge of the village, very nice Spanish atmosphere and chose Paella. Looked a lot better than it tasted, the fish was dreadfully overcooked.


We followed Juan's route into L'Escala which takes you straight along the road, not a nice way to end a wonderful walk. I think there might be a more meandering alternative but at this stage and in the freezing gale fast was best. I wanted to get to L'Escala in time to look at the famous Ruïnes d'Empúres.

What we hoped was a short-cut at the end was the opposite and we had to walk round the whole site to get access. Rain was now mixed with the wind and Christine had had enough leaving me to wander around the ancient ruins on my own.

The Greek settlement dates back to the 8th Century BC and sits on a small hill to the south of the silted up harbour the shape of which, in what is now a field of barley, is still visible. Out to sea is the remains of the old harbour wall. The ruins themselves are the foundations and cellars of the old town with the street pattern, the old town square, and the functions of the buildings clearly discernible. It's a fitting end to a route which themes itself on history.

At the hotel we are joined by Javier from Branosera who is staying with a friend from Barcelona. They have driven up from Barcelona to congratulate us on the completion of the walk. It was very kind of them to do that although of course my lamentable lack of Spanish means I couldn't adequately express my thanks. Having walked right across Europe, and walked in many places around the world, I think that the GR1 Sendero Historico, although not well known, is one of the best long distance trails there is. Many thanks to all of those who have helped me along its route and made my trip so enjoyable.

- Posted using BlogPress from my iPhone
Posted by John Hayes at 11:54 AM