Dreadful nights sleep and it was probably my fault.  At 5,166 metres the grim camp at Gyam was our highest yet and anticipating a bad night I took my first diamox, the drug supposed to help with the altitude symptoms.  Christine has been taking them since we got off the plane at Leh but she is into drug assistance of all kinds and even bought some sleeping "pills" (had the size and look of rabbit droppings) from the monks in the monastery at Thiksey.  Whether it was caused by the diamox I don't really know but I just couldn't get my breathing to work on automatic.  It was like my body had forgotten how to do it and needed reminding every 90 seconds or so by which time it was 30 seconds too late requiring a conscious gasping double dose.  It was miserable and I thought the night was never going to end.

Fortunately I hadn't forgotten how to walk and made it up the Yalung Nyau La (5,445 metres) without any trouble - a long and steady pull up a rocky valley to the top.
From the top of the pass the views were incredible - snow covered mountains on the horizon; a huge blue lake in the middle distance; and, in the foreground at the bottom of a steep descent, a hot desert.
After lunch, which we eat half way down the dusty trail leading from the pass, we head down into the desert.  Very hot and a similar afternoon's walk to the one we made 4 days ago on the way to Riyul.  Even with the heat you can still appreciate the dramatic landscape.  On our left, standing perhaps 200 metres high, was perfectly formed lateral moraine, the remnants of a huge glacier which in the not so distant past must have carved out the valley at a time when the climate must have been a lot wetter than it is now.  On the right, and higher still, huge mountains with snow covered peaks towered above us.

Resting on the other side of the desert - on a patch of grass in front of a Changpa settlement - the sun shining through some ice crystals in the sky produced a lovely rainbow effect (alternatively Christine had slipped me one of her monk supplied rabbit dropping sleeping tablets). 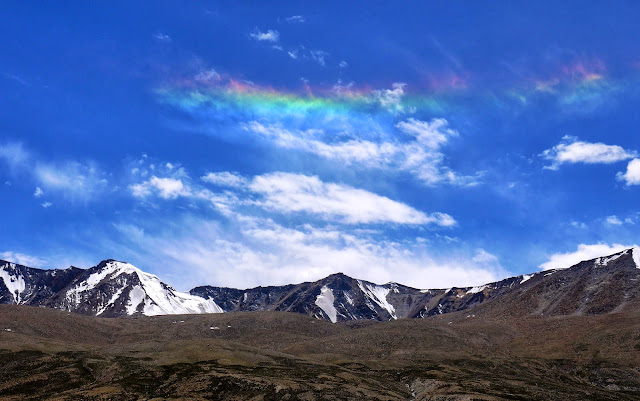 The last bit of the walk provided another contrast - a descent through a tight little valley, almost gorge, bottomed out by a river swollen with glacial meltwater.  Arriving at Korsok we found our tents already tightly assembled in a small field close to the village.  Another campsite with a stream on hand for washing. I'm looking forward to a good night's sleep with an automatic breathing system restored.