Back on the GR1 Sendero Histórico - Cantabria and beyond

Yesterday I crossed a Spanish regional border, from Castile Leon to Cantabria and things GR1 fell apart. It was a frustrating day but provided essential information for my forthcoming GR1 guide.

In Spain regional government and regions are incredibly important. They affect everything even long distance walking routes like the GR1.  The GR1 ends at the "border" between Castile Leon and Asturias rather than going all way to Finisterre as originally intended presumably because Asturias and Galicia (particularly the walking/climbing associations) are not interested.  If the regions don't cooperate it's a problem.


As I understand it the FCDME, the Cantabrian Climbing and Walking Association did support a route, and I walked part of it today, and then they dropped it. Good decision, it wasn't very good.
For the guide I have to get to Reinosa,  it's an access point for Madrid, Santander, and Bilboa and an obvious "end of stage" for anyone doing the trip bit by bit from abroad. I just have to find a better way of getting there than the route that was the GR1.

There is an off road route from Branosera to the Cantabrian border but after that, if you follow the original GR1 route, you have to walk 12 kilometres along the road to a place called Soto.

I hate walking along roads so when Jesus Garcia Delgado, my new friend from Branosera, stopped and offered me a lift I said "yes". He was with two of his friends and actually offered to take me to Santander for a day on the beach, which was tempting, but I settled for a lift down the road to Barrio.

Once I escaped the road the walk was alright (apart from a stretch where I had to negotiate six separate barb wire fences) and clearly the reasoning behind a huge detour along the road was to visit the castle at Argüeso, which to be fair is a very fine castle.  Trouble was by the time I got there, even after the lift from Jesus, I wasn't in a mood to appreciate it.

After Argüeso I followed a route up into the hills and along country lanes all the way to just north of Fresno Del Rio, which was followed by more road horrible walking into Reinosa. Not a good trip.

The next stretch of the original route, along the northern banks of the Ebro Reservoir involves yet another walk along a road. I didn't walk it the last time I was here and had no intention of doing it this time.  The Bilboa bus from Reinosa did most of the work and I had a very pleasant evening at the incredibly cheap roadside inn in Corconte.

The plan  today was to walk the stretch to Pedrosa de Valdeporres which I missed last time because of the snow.  I took the direct option following a route up to the top of the nearby hill and the "border" with Castile Leon. This was a mistake as the route was totally overgrown and virtually impassable.

The route then takes you over the top of a hill called La Cruz and for once it's actually marked on the map.  There are no way marks although just before coming off the hill on the other side you start to see signs which have been covered with paint. The farmer was on the hill checking his cattle and although he didn't have his paint pot he helpfully pointed me to the next stage.

Actually the hill is a really interesting place. On the top of its south facing flank is a long ditch which looked just like the first world trench remains I had seen on the Karnisher Hohenweg last year. On the other side of the main road is a pyramid which looks like a memorial. Turns out that this was a key Republican defensive position in the Civil War, protecting the road to Reinosa which in turn was key to the defence of  Santander. The memorial had contained the remains of more than 300 Italians who died trying to capture the hill and was built by Republican prisoners of war. There is no record of how many Republicans died trying to defend the hill.

After walking east along the road for about 300 metres, towards a wind farm, the way marks reappear and you're well directed all the way to Pedrosa de Valdeporres. The signs are good but most of the trip you're walking along a concrete access road built for the wind farm.  The views make up for it though, particularly looking forward to the towards a huge and nameless limestone feature - a sort of two tiered table top mountain which you go up, around and then through on the next stage of the trip. 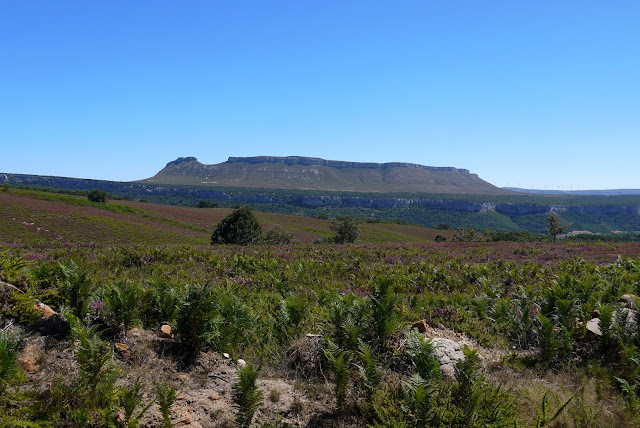 The route then takes you down to Abede de las Pueblas a lovely village with a number of large solid stone houses and a beautiful church.  Near the church is a sort of community bar which if you're lucky, as I was, will be open and will serve you a cold drink.

The final stretch of the walk, down to Pedrossa de Valdeporres takes you across the narrow gauge railway line that goes all the way to Bilbao. It only runs once a day but not until the early evening.  I was on time both for a late lunch (three courses with wine and coffee, 9 Euros) at Santaelices and the bus to Bilboa.  It was the same bus and same driver I caught yesterday on the trip from Reinosa to Corconte.
Posted by John Hayes at 1:40 PM