This walk is an easy one that, with its delights and frustrations, is a good introduction to walking in northern Spain.  There are signs everywhere of a countryside which used to be a lot busier.   Unfortunately the low usage levels of paths originally used to connect villages which are now abandoned means that some are getting overgrown.  Navigation is occasionally a challenge, particularly when the way marking is less than perfect. 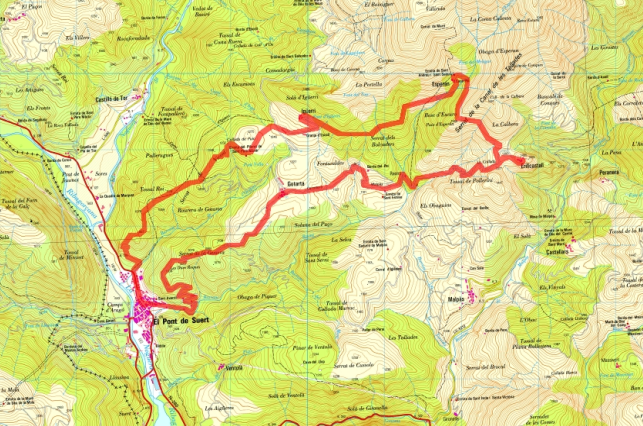 On the face of it, this is a straightforward walk.  Just to the east of  El Pont de Suert is a shallow secluded valley full of small oak trees.  The walk heads out near the valley bottom and returns higher up on its northern side. It follows an old trail connecting ancient villages and farmsteads.

The most interesting village is Erillcastel beautifully located on a hill at the head of the valley. Interestingly a power cable reaches the village so the last residents must have had electricity, although the water seems to have been collected from a well below the village.  All the buildings there are ruins but the village was occupied less that fifty years ago.
The walk is 18km long, with 600m of climb, and can be completed in about 6 hours.

From the main road running through El Pont de Suert head east to a street at the edge of the town running north south.  Turn south until it reaches a smaller road signed to Gotarta. Turn left onto the smaller road and follow it east.  Continue along the road as it heads east along the valley then switchbacks north up its side for 4 kms.  It's a frustrating stretch of road walking but the route does improve!

Gotarta is a small scruffy village sitting on a low ridge and behind it is a huge tree nursery.
At Gotarta the route leaves the metalled road, joins a track and continues east along the valley. After 2km  the route descends and crosses a stream underneath the ruins of a large farmhouse (Roans). Next to the farmhouse, when I past it, 4 large unfriendly looking bulls made it clear that entry could be a perilous exercise.

200m after the farmhouse take a left fork and follow an old derelict road up Erillcastel. Initially the road follows the left side of the valley but, after emerging into a small flat area, it crosses a stream and follows a meandering route up the valley's right hand side. The stream has washed the road away and finding the path on the other side is tricky.
Continue on the old road up to the pass.  Erillcastel sits on a small hill in splendid isolation a few hundred metres away.  The path up to the village has largely been lost, but three large trees in a field, a mound of stones and the old well mark the route.  The views from the village are excellent but be careful - everything is falling down.  If you can get into it have a look in the old church, the altarpiece, very ornate, is still intact but I suspect its days are numbered.
Finding the next stage is a challenge.  Head back to the three trees and follow the fence around the field.  The path may run on the other side of the fence but if it does it's now impassable, so stay on the inside until a 'gate' in the fence is reached. Turn left at the gate and the path, hidden by shrubs,  is immediately ahead.

No longer an old road the route follows a path, a path that originally linked Erillcastel with Esperan and as both villages are abandoned it's not busy.  Follow it as it climbs gently north west on the open side of the valley. With numerous animal tracks its not easy to spot, but if you can't see it you're not on it so retrace your steps and have another look.
When the path reaches trees, box and oak, turn right and head through a tunnel of trees.  After 600m the path swings round the head of a valley and descends down to a stream.  Cross the stream and follow a faint path across a meadow to Esparan. The little Romanesque chapel with its very plain interior is accessible so have a look inside.  The font, left abandoned in the corner, has christened babies for nearly 1000 years.

In the centre of the village to the south of the church are the remains of a large old house with marks over the lintel to the main door suggesting construction in 1707.
The original routes out of the village are long gone so turn left at the chapel and then left past the ruined house and onto a new track recently constructed for an irrigation pipe. Follow the dirt road southwest as it swings around the valley for 1.2km to where it joins a path on the right.  This path is extremely difficult to spot and unless it's now been marked, perhaps impossible without a GPS.  If missed carry on along the dirt road, keeping to the right and north side an irrigation reservoir, until a metaled road is reached. Turn right onto the road and follow it for 400m to a GR11 sign.
If the path is found follow it north west through box and small oak trees until it emerges at Igüerri, a large old farmstead which for once is occupied. The original footpath is now impassable so follow a road east and then west out of the farmstead down to a junction and the GR11 sign.
Way marks improve on the GR11 and the path is better defined. Head downhill and southwest along a grassy path through open countryside. The path swings northwest across a low valley before heading southwest again and descending, through a mixed landscape of gullies, patches of shrub and pine trees down to El Pont de Suert.