A Circular Walk from Arundel

This is one of my favourite local walks.  If it was a real ale it would be called something like ‘Old Dependable’, I’ve walked it dozens of times, it’s familiar and never disappoints.  It starts and finishes in Arundel, takes you through wooded parkland, crosses the meandering River Arun (twice), traverses classic high chalk downland, and swoops back to Arundel along a lovely dry valley.  It’s just a shade under 19kms long, can be completed in under five hours and is just tough enough to justify a couple of pints or so of genuine real ale in Arundel before returning to Brighton (or wherever). 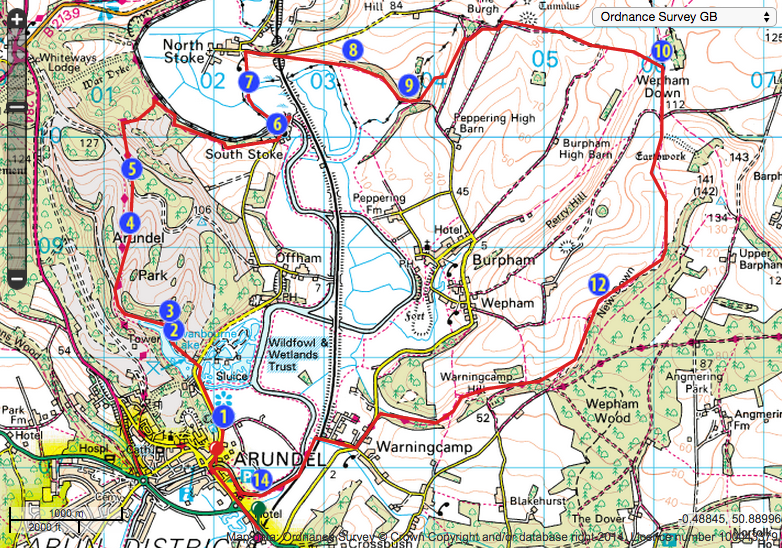 To be honest it does challenge the number No 2 ‘Walks from Brighton Rule’ (you have to be able to get to and from the walk from Brighton by public transport) as it takes nearly an hour to get there on either bus or train (you can get there nearly as quickly from London).  It’s not that far as crow flies but if you go by train you have to change at Ford and the bus option, the ‘Coastliner 700’ is even less direct.  When I had a car the rule could easily be ignored but no longer.

Last year (2014) I did the walk twice, once with Roger, who came down from London, and once with Christine and was lucky with the weather both times.  With Roger, at the end of July it was high summer and the barley in the huge fields on top of the Downs was being harvested.  With Christine it was a couple of months later and the pheasants on the Duke of Norfolk’s Estates (he owns most of West Sussex) were looking distinctly nervous as their Armageddon approached.
My route saves the actual Arundel visit to the end and heads north along Mill Road, beneath the west wall of the castle, to the Swanbourne Lake.  Ignoring the temptation of the famous Black Rabbit Pub in Offham (and the joys of the nearby Arundel Wetland Centre) it follows a path past Swanbourne Lodge (a classic Sussex split flintstone building) around the west side of the lake and up a dry valley into the 1,000 acre Arundel Park.  High above the lake is Hiorne Tower, an 18th Century folly and home to one of three famous local ghosts (an unfortunate young woman who leap from the tower after being rejected by her lover after telling him she was pregnant).
After crossing the Park and enjoying great views back to the sea the route descends a steep chalky hillside, leaves the Park through a secluded gate in a flint wall and follows a path through beech trees along the banks of the River Arun.  After climbing a small hill it drops down to South Stoke (featuring an interesting 19th Century interpretation of a medieval barn) and the first crossing of the River Arun.  After the dry chalky landscape of the Arundel the route is now crossing water meadows which, if sunny, will be full of sulking black Aberdeen Angus cattle complaining about the heat.
At North Stoke the route turns east along a quiet country road following a little ridge and over a tunnel through which passes the London Arundel railway line.  At this point I normally turn right and head down into a water meadow and follow a path running underneath a cliff formed by an old meander in the river.  It’s a lovely secluded spot surrounded by trees and full of wildlife.   Every time I've walked through it I’ve seen a raptor - buzzards, kestrels and even a peregrine falcon. In July however it was hopelessly overgrown and unless you’re into bush wacking, perhaps best avoided.  Instead stay on the road, now a farm track, and continue east over Camp Hill, past an abandoned farm building and through a little copse to rejoin my original route.

From the copse the route continues east along a farm track across huge wide open fields and as evidenced by the number of bird feeders and strategically placed strips of maze – killing fields if you happen to be a partridge or a pheasant.  In fairness to the Duke of Norfolk and I guess what must be an army of gamekeepers, the number of birdwatchers I’ve seen around here indicates it’s not just the pheasants and partridges who manage to find a home on the downs.


After the ‘uplands’ and huge horizons the route turns south, descends across Wepham Common Down and drops into a another intimate space, a long dry bending valley with the Wepham Wood providing a dense eastern boundary.  The route sticks to the bottom of this valley, initially shadowing a race horse training track, for nearly three kilometres before emerging onto a road near Warningcamp.  Here it turns left and then right down to the railway line (not far from a youth hostel), crosses it and follows the bending River Arun back to the town.


Arundel Castle, which dominates the town, is a 19th Century reconstruction of an earlier medieval castle.  It’s the ‘seat’ of the Duke of Norfolk whose family has been in residence for 400 years.  If that’s just a touch depressing, drop into the Swan Pub in the High Street, sink a couple of its excellent pints and plot the revolution, you definitely won’t be the first.