Hiking through Castellón - Day 7 to Benasal

After a day spent in , with a little detour up the Penyagolosa, it’s back to business as usual and another march across the wild and almost empty uplands of Castellón. 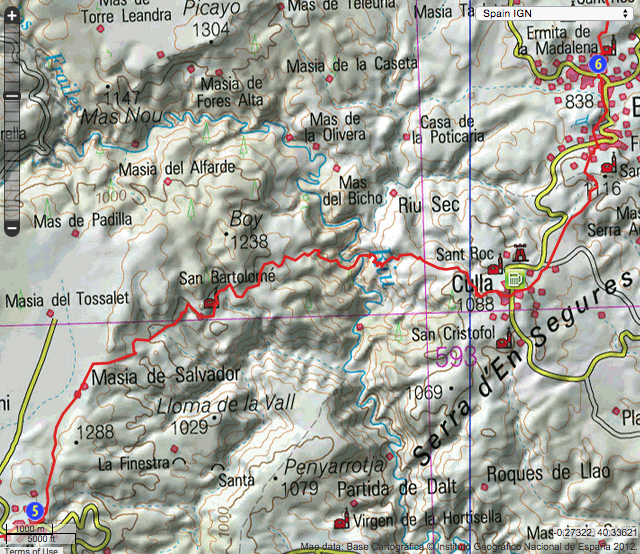 The Day 7 walk is 23km long and can be comfortably completed in 8 hours.  It’s a lovely walk that, after completing the traverse of the upland plain around Vistabella del Maestrazgo, heads east down a long beautiful valley.  After crossing another valley running north south it continues east and climbs to a pass on which sits the little town of Culla where, after 5 or 6 hours walking, a typical Spanish lunch can be enjoyed.   the after lunch walk is easier and it’s almost downhill all the way to a nice hotel at Benasal.  Day 7 is Spanish walking at best, beautiful remote countryside, good food and great value accommodation.

From the church in the middle of head north to the main road, cross it and join at dirt road heading north across the plain.  In the morning watch out for the Ibex which seem to be really common in these parts. There are also numerous examples of the dome like stone shelters built for the shepherds.
After about 4kms the route swings from north to east and starts a long journey down a valley.  It's tempting to follow the dirt road all the the correct route only occasionally uses it and more often follows a more direct and interesting path.  Watch out in particular for the little whose gardens are protected from the Ibex by hundreds of plastic bottles hanging from the fences.  After about 3km a small but very pretty church dedicated to San Bartolomé, is reached and in its porch are stone benches for centuries have stopped, dropped their loads and had a rest.
Passing occupied farmstead the route then crosses some upland pastures (very green in the spring) where the path and the are hard to spot.  It then heads down a steep path through trees into a much valley, the valley running north south.  At its bottom is the Rio Monleón which, despite the size and depth of the valley/gorge does not contain a lot of water.  After a climb out the valley that mirrors the descent the route then follows a dirt road up the valley to Culla.
Entering Culla from the south you definitely don’t see the town at its best with the smells from the dilapidated farms the most memorable feature. It does however have two restaurants and both serve really excellent food (one of them at the weekend).
The view back to Culla from the town on its northern side is much better and qualifies it for membership of the ‘classic hill top’ town club.  The final stretch to Benasal is downhill () and actually involves crossing a little pass near the village of Font Segures (which has a hotel) before dropping down to Benasal.
Conquered from the Moors in the 13th Century, Benasal is a small town (1200 pop) that nestles in the bottom of the valley.  The locals are particularly proud of the spring water and adverts for the local bottled variety adorn the buildings.  It features a fine Baroque church and the remains of a much older castle and also, and perhaps , several good value hotels.  I stayed in the Hotel Piquette (), a classic family run Spanish hotel whose owners are happy to produce an early dinner for the English.
Posted by John Hayes at 2:50 PM