Hiking through Castellón - Day 9 to Morella

The last day of the hike through Castellón is both a suitable climax to the whole trip and somehow, in a single day, sums up what makes walking in Spain special.  The walk between what are arguably the most attractive hilltop towns on the whole route, Ares del Maestre and Morella, journey’s across a wide and open landscape, still farmed in places, and travels along paths that have obviously been used for centuries.  It’s an old fashioned countryside in every sense of the word and the walk across it to Morella is the perfect way to end the journey through Castellón. 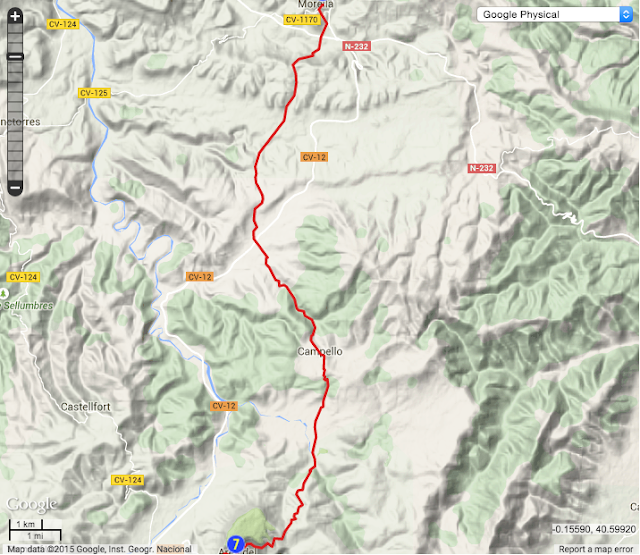 The Day 9 walk is 23km long and can in about 7 hours.  There is nowhere on the route for lunch so ask the hotel at Ares del Maestre to prepare a sandwich.  There are of course plenty of places to stay at Morella, a good choice of restaurants for an end of trip celebration. From Morella there is an early morning bus back down to the town of Castellón on the coast and the train network.


The route heads east out of Ares del Maestre following a concrete road underneath the south facing cliffs of the Mola Ares (1321m). The views back to the town are spectacular.  The path gradually swings north and after about 5kms crosses a pass into another valley.  The countryside is open with a scattering of Holm and Pyrenean oak.  The concrete road is left behind and replaced by the original trail.  Still contouring, the route travels north along the east side of the valley with views down to an occupied farmstead below and large herds of white cattle.

Descending onto a plain, and after crossing a wide expanse of open land, the route passes the farm at Masia la Pinella (more white cattle with and now sheep) and after following a path through trees climbs up to the another farm at Mas Campello.  Here the shepherd is still in situ, alone with his sheep, although the rest of the population of the little hamlet long departed.

The route then follows a dirt road down a long wooded valley, perhaps the most tedious part of the route, before emerging again into open countryside.  After crossing a road it then follows an ancient walled drove road for the next 4 kms. It’s a lovely stretch of walking.  On the final few hundred , just before reaching a road, the path doubles up as a stream and if it’s at all wet the route can become impassible and evasive action (walking in the nearby field) is required.

If the you’re afraid of cattle the next couple of , after the road, could be a little intimidating. The first time I walked it, I was confronted by a bull and decided that trying to pass him in the narrow confines of the walled path was not a good idea and the second time found a of cows with calves (the bull’s progeny I suspect) who didn’t exactly welcome a couple of English walkers onto their turf.  I managed to get past both course, but I know of others who would not have found it so easy.

Once past the cows, it’s a short climb to a pass and the best views of the whole trip.  Sitting below in a valley is the stunning walled town of Morella. The town is built around a flat topped lump of limestone and rising above the floor of the valley has a majestic appearance.  The defensive benefits of its location are obvious and attracted a whole series of tenants from the original Iberians through to the Greeks, Romans, Visigoths and Moors.  On top of the limestone sits a castle, which although originally Moorish, is said to have been rebuilt by El in the 11th Century and used in the Battle of Morella when El was fighting on the side of the Moors.  The town Christian/Moorish for more than a Century during which time it changed hands several times before finally being captured by the Christians in 1232.

Email ThisBlogThis!Share to TwitterShare to FacebookShare to Pinterest
Labels: GR7 through Castellón, Hiking in Spain