Thanks to Key Retirement for including a tip of mine in their recent piece on recreational walking. There were some great ideas from my fellow contributors, but I particularly liked Pete Hill's advice on not getting lost.  The solution is to use your phone.

Apparently 72 per cent of people in the UK own a smartphone all of which come equipped with a GPS.  However, based on a small sample (my walking buddies), hardly any of them (just me) know how to use it.  Even a tiny learning curve is too much for the people I associate with and they remain stuck in the world of paper maps. 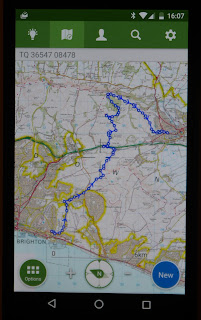 My 'app' of choice is Viewranger.  It's easy to use and fun.  You can plan the route before you go - either by plotting it yourself and using someone else's route - and then follow it out in the field.  I'm rarely on a walk where there is absolutely no evidence on the ground about the route so only use the app to check a turning.  Typically I'll record the 'track' as I go along and then publish it to my own page in the Viewranger track/route library making it available for other people to use.  Believe me people do download each others routes and currently 8 kind souls have  me as an author.

As well as being easy to use, Viewranger has access, via its map store, to a huge range of premium and free maps.  The premium maps - for instance Ordnance Survey maps - can be purchased at a fraction of the cost of their paper equivalents and are available for a growing range of countries from around the world (including Spain where I spend a lot of time).  The free maps are Open Maps and although less informative will help if have an accurate route.
I've been in touch with several people recently who followed my advice and went from Munich to Venice but struggled to find their way.  I'm afraid that I wasn't as sympathetic as perhaps I should have been because my trip I found it an easy route to follow.  I checked this out with Christine and she reminded me that at crucial moments I used the phone.  Perhaps only two or three times a day I would get it out, use the Viewranger compass to orientate myself north and then with the screen displaying my position relative to the route state with absolute confidence 'it's this way'.

So I'm with you Pete Hill - last time I looked it's 2015 and excuses for getting lost are now few and far between.

Email ThisBlogThis!Share to TwitterShare to FacebookShare to Pinterest
Labels: Viewranger