The last day of my trip along the Lycian Way was both interesting and eventful.

At chatted with the owner of 'Purple House'. He's been here for 10 years and took the derelict farmhouse over from his grandfather having previously worked in, of all places, a nightclub. He met his wife 3 years later and they live here with their son who they educate themselves. They are virtually self-sufficient. Describing the life the biggest issue is water which has to be collected as it rains in the winter, stored in cisterns, and then rationed carefully through the summer. It's limestone country and there are no natural springs. As he built his little house the network of pipes and cisterns surrounding the property has grown and includes a separate sea water system which they use for washing. There is a green house and everything in it has to be watered. 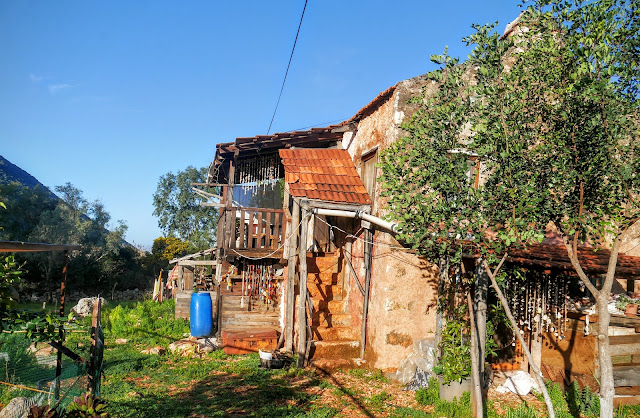 The Lycian Way was a total bonus for him and when he started to restore the property he had no idea that the route went through his grounds. After the first two Germans asked to camp there 10 years has received a stream of visitors and only the summer months are 'closed season'. Every year for 2 weeks in August temperatures reach 50 degrees. 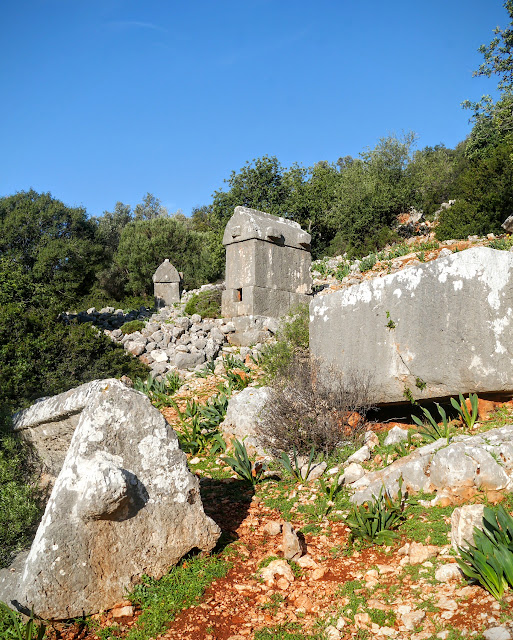 Kate Clow, the English woman who single handedly conceived of the Lycian Way, and whose guide I used to plan my trip, has visited him 5 times as she walks the route and checks the way marks. If there is such a thing she should be given a lifetime award for services to Turkish walking.

The name 'Purple House' derives from the role of the site in the business. There was a small Graeco-Roman port here, Aperlae, and sea snails used to make the purple dye were gathered and transported up the coast and processed in the workshops I visited yesterday at Andriake.

After yesterday's brush with darkness I was on the trail early 8. The remains of the ancient Aperlae settlement were immediately apparent as I left the Purple House, in particular huge identical stone boxes,  tombs mostly with lids removed.  Climbing above the remains of the settlement there was a huge ancient cistern the roof of which had been broken but which still held water. Like the Purple House the Greeks and Romans relied on rain water.

Climbing away from the sea amongst rocks and shrubs similar to the driest parts of Provence I passed through the ancient city of Apollonia little of which remained.

From here the were hard to follow and I lost my way on some false trails. The correct route once recovered, led me to one of the few fences I've seen in Turkey. I climbed it, which is often a mistake, like breaking into a prison, and sure enough 10 minutes later I was having to climb another one to escape. Climbing 6 foot rickety fences is a mugs game. On the trail was soon heading into Bogazcik. A tractor towing a large water barrel came past, father driving and son on the back of the water barrel. The father stopped and offered me a lift. Now I often get offered a lift and always say no unless the vehicle is a tractor as this in my warped world feels like a legitimate walking alternative. I joined his son on the large water barrel and for next km or so clung on for dear life.

Arriving at a greenhouse whose occupants were scheduled to benefit from our watery load we shook hands, took photographs, and I set off with a grin on my face. 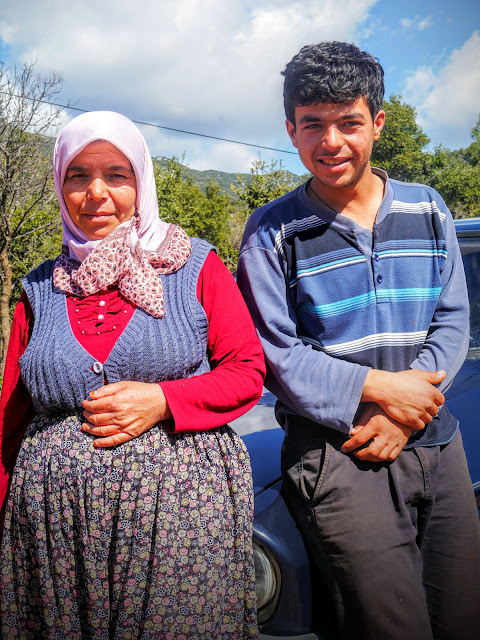 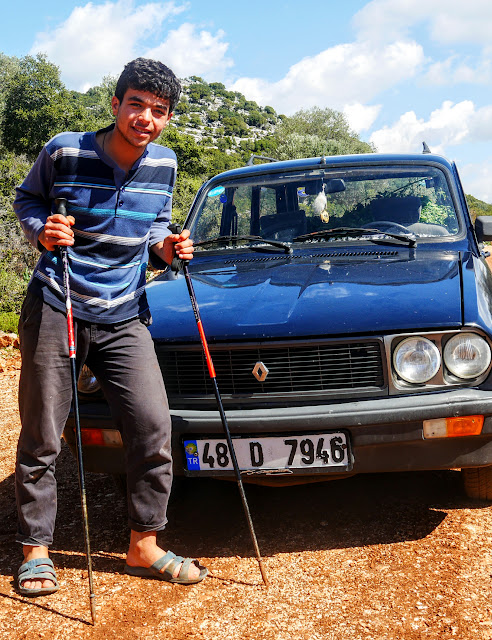 The story continues. 10 minutes later, Ali stops me in his car. Ali is with his mother and his car is full of greenery for his goats. Now I don't think Ali was directly related to the father and son (no closer than anyway) but he knew about my expertise as a photographer. It took me some minutes and several false starts to grasp what was happening, but it turned out he wanted me to take a picture of him and post him the photographs. Many pictures were taken, including some pictures of Ali's mother, which she at first resisted. Ali, who I guess was 16, was particularly keen to have pictures of him alongside his car, which, if I can decipher his address will probably turn up in some Turkish version of Autotrader. 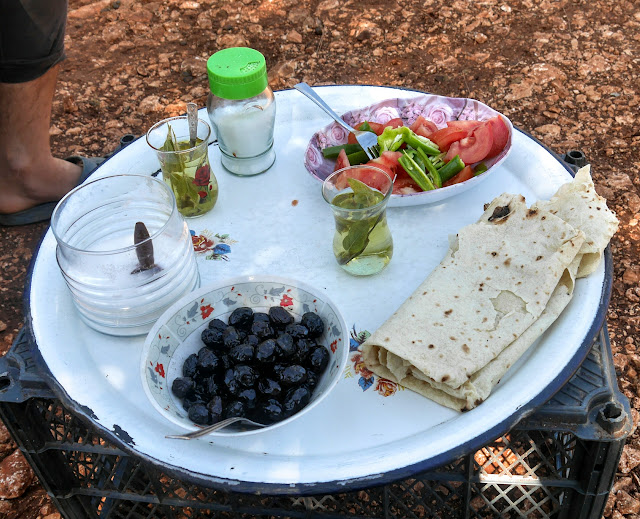 Walking on again and turning a corner in the road I then discover the route takes me right past Ali's house. Ali sees me, rushes over and insists that I stop and have lunch. I try to say no but my resistance starts to feel churlish and soon I'm sitting on some upturned plastic cases eating a of bread, olives, tomatoes and . His mother sat on the floor at a distance of about 10 feet.

Eating with Ali was interesting. I've eaten lots of Turkish never with anyone from Turkey and I think he was giving me a small and very polite lesson in how to do it. What he seemed to be telling me to do was to prepare each mouthful separately assembling different combinations from what in effect was a food . It was very as Ali's mother kept popping off and finding something else, usually from the garden for me to try. We ate some interesting soft green 'nuts' tasting halfway between a broad bean and an almond and may indeed have been a green almond.

I was starting to think that I might never escape when in the distance we heard the voice of a man shouting at his goats. This I think was Ali's father and his voice seemed to at last accepted that I still had a long way to go and bid me farewell. After more handshakes and a promise to send him the photographs I was at last on my way. 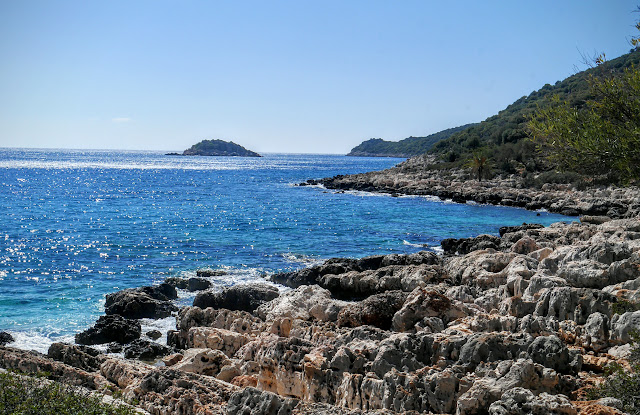 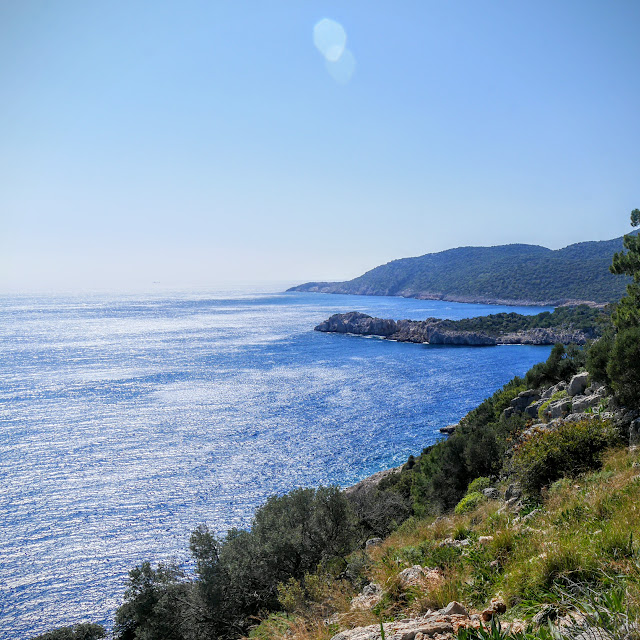 Heading down a hill, past yet more goat farms the route turns again into a beautiful coastal footpath and swings round a bay, climbs across another headland and returns once more to the coast. Eventually the route starts to swing north and climb in a more serious way. As I get closer to the top the amount of rubbish scattered amongst the trees increases, particularly discarded nappies and children's clothes. It's clear that this was something different to the rubbish you often find near a picnic site. 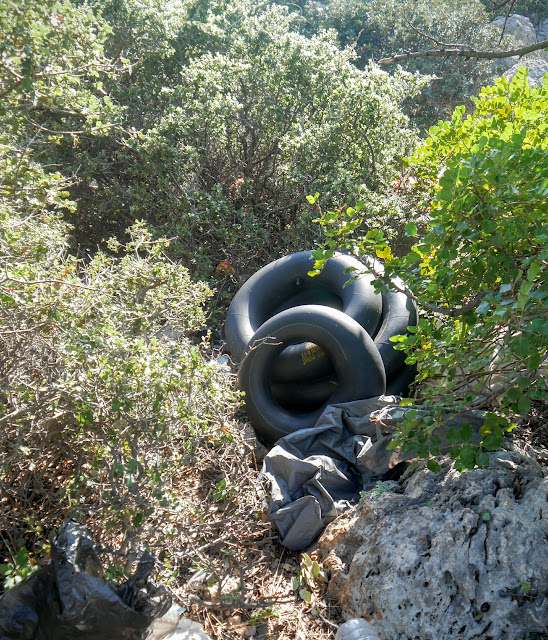 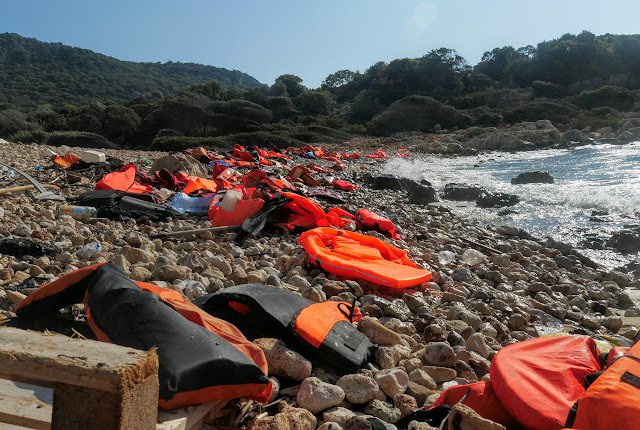 Heading down the hill I come across a number of empty and desperately makeshift bivouacs amongst which were all sorts of devices designed to help people stay afloat in water. These include, pathetically, inner tubes and the foot pumps. Clearly this was a camp where refugees on the way to the nearby Greek island of Kastellorizo assembled. Further on, even more horrible, hundreds of empty life jackets were washed up on the . Later on in Kas, trying to find out what had read that last week 160 Syrians, including 60 children, were picked up by the Turkish coast guard trying to cross the stretch of water to the island. I hope the life jackets belonged to them.

After the 'campsite' the rest of walk felt like an anticlimax but it was pretty enough and included some fairly stretching bits involving narrow ledges. Earlier I'd met an American couple complaining about the tough for them I now much worse was still to come. The route went past the lovely little resort of Liman Agizi and if they had any sense they would have taken the ferry from there to Kas.

So that's it. I'm catching the plane home the day after tomorrow and rather than do the planned circular walk in Kas I'll probably hang around, chill out, and work out the best way to get back to Antalya. When I get home I'll pull the whole thing together in the usual way, but at the moment it feels like I've had a great trip.

If you want to download a  file this this link 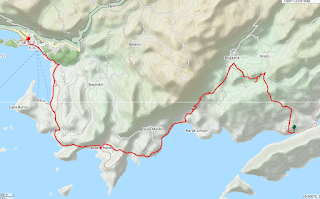