Today's walk was huge in every sense of the word, huge scenery, huge distance and hugely at the end.
If you are a regular reader of my blog you will know that my preferred style of walking involves staying in local accommodation as near as possible to the end of each day's walk. means a looking to find a hotel or something similar about every 25 kms or so, allowing for around 8 hours walking a day. I try to plan a schedule in advance, and adapt the desirable to the available. When I do this, in order to make things work I am sometimes over optimistic about what is possible. Today was one of those days. We walked 35 hard and difficult from Laxe to Mourin, a hamlet to the north of Camarinas, arriving after 9 and a half hours with wet sore feet.

Such over-optimism is punished particularly on coastal walks. rule, which says you can calculate how long it's going to take to walk from a to b by applying a formula based on distance and altitude, uniquely when it comes to coastal walking. The extent of the minor deviations, both horizontal and vertical, and the difficulty of the surfaces encountered, combine to make progress painfully slow. This is particularly the case along the Camiño Faros whose designer, as Christine pointed out, "does not want you to miss a thing". This is a tough stretch of walking and should not be underestimated. 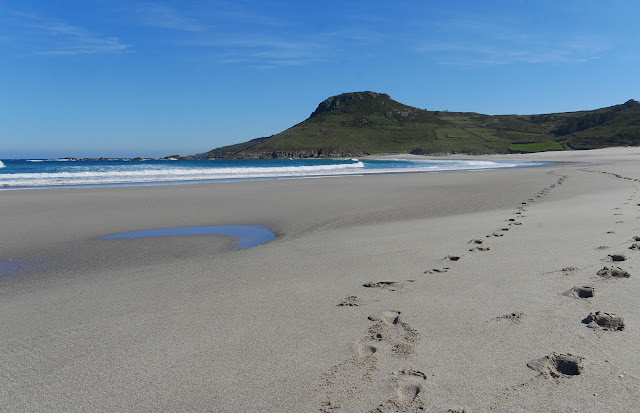 The day broke down into two parts, stretch before and after the lunch stop at Camelle. Before lunch the weather was glorious with a clear light illuminating amazing scenery. The highlight was probably the climb up to a little summit, the Petón do Castro, which provided huge views up and down the coast. On the way up to the summit, just beyond the lighthouse, we passed through what looked like a very ancient field system, the sort of thing I've seen on the west coast of Ireland. Below on the other crossed a wonderful beach, the Praia Soesto whose huge waves were attracting surfers. For bird watchers the sanctuary at the Logoa Traba looked with hindsight, and because the paths were faster progress staying on the beach. After lunch the weather was dull with a cold easterly coastal scenery that, compared to the morning, felt a little meaner and unloved. has a few down at heal as did Arou the next village along. The toughest stretch of walking came just after the fisherman's huts beyond Arou and the little at Porto Santa Mariña where for a time we were almost scrambling. Maybe it's something to do with the prevailing this stretch of coast had more plastic rubbish deposits than any we had seen so far, a curse of course that is not unique to Spain.
I suspect in of was down to the fact that by mid afternoon we were both tired and wet. Much of the trail was waterlogged and, with thick gorse on either side, avoiding walking through what were in effect streams was just impossible. a particularly difficult stretch just before the Cemetery Ingleses. At the place where sailors from an 1890 shipwreck are buried we finally gave up any attempt to avoid the continuous puddles and just walked through the water.
The weather forecast for tomorrow looks poor and after today's experience my schedule looks crazy. We have to be in Santiago de Compostela by will have to look for short cuts. Never mind, I've seen enough to know I'll be coming back.

We stayed at the Hotel Rustico Lugar Do Cotariño which is located about a  to the north of the port of Cotariño.  It was very the restaurant was shut on Monday - there are other hotels in the town itself.
Posted by John Hayes at 8:10 PM