The island of Jersey, just off the coast of France but very British, is not everyone's idea of a walking destination .... but trust me it works. It's especially good if you stay in your own hilltop tower.

If I'm honest it was the tower rather than the island that triggered the trip. We've been looking at Landmark Trust properties for years but have never taken the plunge. The Trust's mission is to preserve threatened historic properties by turning them into holiday accommodation. They have been at it for more than 50 years, and now have a portfolio of really quirky places to stay, one of which is Nicole Tower.

The tower sits in a field on top of a hill in splendid isolation. A folly built sometime in the early 19th Century, it reached its current height when the German occupiers slapped on a third storey for a gunnery observation post in the 2nd World War. It's brilliant. It has a kitchen on the ground floor, a tiny living room with 5 gothic windows on the first, and the gunnery observation post, now a bedroom on the top floor. The bedroom has narrow slits for windows and the ceiling is marked with a compass and degrees to enable rapid communication to gunners below of a potential target. Like all of Jersey's splendid array of 2nd World War fortifications, it was never used in anger. The views from Tower, particularly the sunrise, are amazing.

I've actually been to Jersey many times before but to work rather than walk and hadn't really seen the island. It always felt old-fashioned, rich and a bit smug. Although the financial crash took away some of the gloss it's still a tax haven that's doing very well. There are some seriously rich people there, lots of large well-appointed houses and roads packed with SUVs trying to find somewhere to go to on a small island.

Jersey is a strange place. In some ways it's very British but for all intents and purposes, it is an independent country and not even part of the EU. In many ways, it's a Brexiters paradise with tightly controlled migration ensuring that there is just enough of everyone to keep the show on the road. Everything is independently managed: police, health, post etc and, with plenty of money, delivered to standards unheard of in mainland Britain. Of particular significance to anyone coming here to walk is the bus network which is excellent, serving all parts of the island on a standard £2 per journey fare. Taxis, by the way, are expensive and should be avoided.

Part of Jersey's strangeness is down to its history. The military rivalry between the French and English, as far as Jersey is concerned, started when King John lost Normandy to the French in the 13th Century. Efforts to complete the French national jigsaw continued at least until Napoleon with every generation of island defenders updating its fortifications to meet the latest technical threat. The island though remained fiercely off-continent and it took the Germans and the 2nd World War to change this, albeit for just five years. Interestingly the impressive German fortifications tend to be on the western side of island whereas the older English ones face France.

We had our tower for four nights, from Monday to Friday, so planned to get as far as we could around the island in three days. November was turning to December and short days meant walking 75kms in three days was just do-able but four days would have been more comfortable. The tower is located just above St Clements which is in the south-east corner of the island east of St Helier and we decided to set off in an anti-clockwise direction reasoning that we could always miss the last 'urban' stretch of the walk. I had found a GPX trail for navigation but once we got to Gorey, about three hours from our start, the path was well waymarked.

After a short walk south we hit the coast just east of the Le Hocq pub (nearest pub to the tower) and headed east along the beach. Behind us was a Martello Tower, the first of many types of fortification we got to see on our journey around the island. We walked on or near the beach right around the corner and halfway up the island's eastern side to Gorey. The little village overlooked by the stunning Mont Orgueil Castle, a medieval castle key to the islands early defence, is a lovely place, empty in November and with coffee shops pleased to see some visiting customers.

The big beaches finish at Mont Orgueil and although still on an east facing coast the character of the walk starts to change to become rockier, with more trees and a lot quieter. After passing the colourful Archirondel Martello Tower and cutting inland behind the huge Verclut spit, the route turns west and starts a long journey along the north coast.

For a small densely populated island the walk along the north coast was wonderfully quiet and empty. In the summer it might be different but on a windy day in late November we had it mostly to ourselves.

As well as being relatively remote, the north coast is a lot hillier, more rugged, with headlands, cliffs and bays and with ascents and descents the walking a little tougher. The views were great, although in late November there was a lot of shadow. Looking north-west we could clearly see Jersey's channel island sisters Guernsey, Sark and Alderney with waves breaking over the rocks at Les Dirouilles in the near distance. This is proper coastal walking and similar to stretches in Cornwall and Devon.

We stopped for lunch in Rozel at the boringly named Rozel Pub and later wished we had gone round the corner to the better located and more appropriately named Hungry Man. 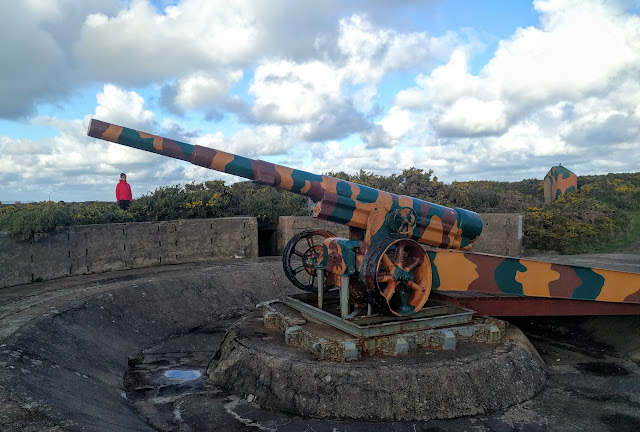 The light was beginning to fade as we approached Bonne Nuit and after 32kms we were getting tired. We had rung ahead for a taxi, which was waiting for us near the little harbour, but there was a bus there as well. The taxi fare was £25 so we decided after that to master the intricacies of the bus network and that was the last taxi we used in Jersey. 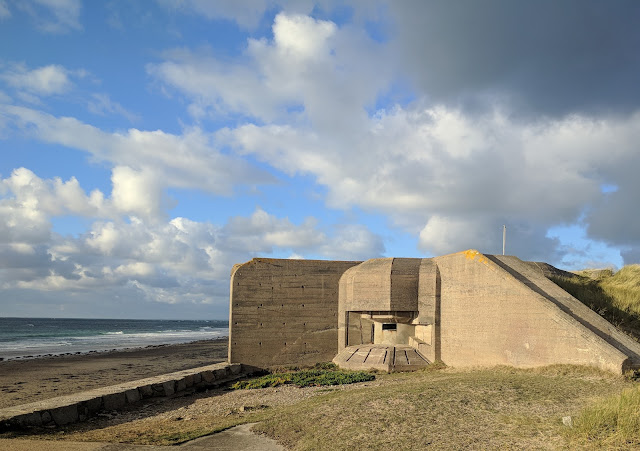 Today started with a slight cock-up which meant we missed the bus to Bonne Nuit by 30 seconds. Dropping about a kilometre of the north coast walk we went instead to the village of St John's before heading west along an increasingly dramatic footpath.

The first highlight was a feature called the Devil's Hole, a slab of rock dislodged from the main cliff by a gash a few metres wide. Amazingly this slab of rock, only metres wide itself, used to be populated suggesting locals sought safe haven there on what must have been a dangerous island.

After briefly visiting the little harbour of Greve de Lecq we started on our journey around the cliffs on the north-west corner of the island. The point at which the coastline turns south, the Groznez Point, bedecked with the ruins of a 14th Century castle ( Groznez Castle) is a particularly dramatic place.

Heading south it was the German rather than medieval fortifications that grabbed the attention. They were massive, much bigger than anticipated, and apparently reflected Hitler's obsession with holding onto his only British possessions. 12 per cent of all the concrete used on the great Atlantic wall, which stretches from Norway to the Pyrenees, was used in Jersey and Guernsey, and a lot of that must have been used building the defences on the western side of the island.

Just below the cliffs one of the huge bunkers had been converted into a wet fish shop and the takeout fish and chips looked amazing. Unfortunately, you could only eat them out of doors, not a good idea given the freezing wind which was now blowing.

Instead we made our way along the beach, stopped at the L'Ouziere cafe and waited for the bus back to St Helier. It had been a brilliant walk.

At St Helier, after navigating our way through the town, we again enjoyed a beach walk before depositing ourselves in the L'Hocq pub for beer and food.

By Day 3 we were bus experts and got to our starting point without any missed connections. The huge beach on the west coast was cold and windy and after returning to the L'Ouziere cafe we walked quickly south along the beach which unsurprisingly we had to ourselves.

After climbing past yet more wartime bunkers hidden amongst the rocks we were confronted with the island's most beautiful lighthouse and the world's first concrete one, the Corbière lighthouse.  Nearby was a multistoried German watchtower (matching the tower at the northern end of the west coast) now used I think by the coastguard.

The next stretch of coastline just beyond the island's prison (the island has everything) was a real surprise and with craggy indented coastline built of rust coloured rocks bedecked with mature trees, some evergreen, was perhaps the most beautiful on the whole coast.  It must be stunning on a sunny day. 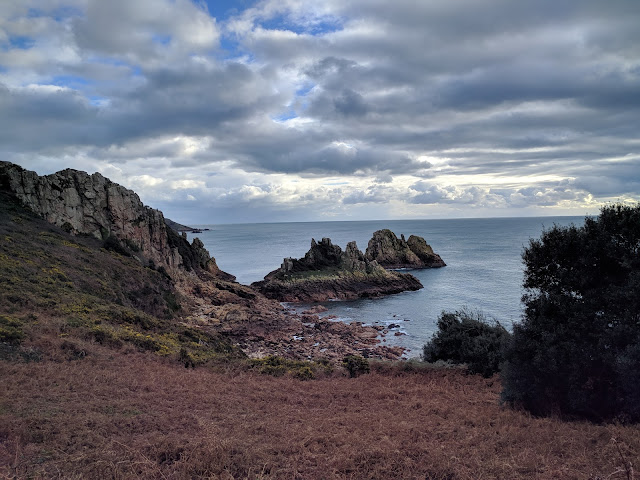 After lunch in a cafe (crab salad at the appropriately named Crab Shack) next to the lovely St Brelade's beach the light started to fade and with it our enthusiasm.  We persisted in the gloom round the coast but by the time we got to the harbour at St Aubin's it was pouring with rain. Our tower on the hill was beckoning so rather than slogging on we jumped on the bus and made our way home.

If you want to download the route then go to my ViewRanger page.