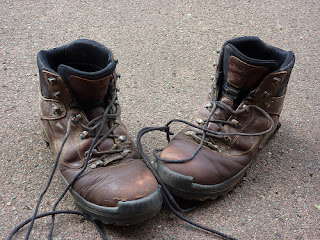 Many thanks to Gyorgy who recommended "The Backpacker's Handbook" by Chris Townsend.  There is more information in it than you could throw a stick at (in fact it even describes different ways you can hold your walking stick) and it certainly got me thinking about boots.
I don't think I have ever owned the big chunky walking boots described by Chris and which used to take hundreds of miles to wear in but my boots have got progressively lighter and my current ones weigh 1.2 kilos.
I like my walking boots and I like the idea of walking boots. Putting on walking boots makes you feel you are preparing for something special, not just going for walk.  I don't get the same feeling from light weight walking shoes - they don't feel serious.  Unfortunately in over forty pages of information Chris challenges much of what I use as my boot wearing justification. .

Firstly he completely rejects the argument that boots provide some additional ankle support. If that's a priority you would need to wear some sort of nordic ski boot (no longer a priority).


Secondly he rejects the justification that stiff soles provide some sort of protection against uneven surfaces.
He makes a very strong case for going light although he possibly goes a bit far when he advocates the bare foot option.  He makes a really interesting claim that a pound on your feet is equivalent to five on your back.  He quotes Ray Jardine who, in his book The Pacific Crest Trail Hiker's Handbook, states that "each additional 1.5 ounces removed from a boot would add about a mile to the day's hiking progress". On that basis going bare foot could mean getting to Budapest about a two weeks earlier than anticipated.
Although my walking boots are already lightweight (just about the lightest Scarpa's I could get) they are heavy compared to the trainer type walking shoe and much heavier than the walking sandals Chris also advocates.  My biggest concern in terms of my feet is that they  start to hurt after about 15 miles particularly if you end the day walking on hard surfaces.  I'm pretty sure that they will toughen up but my experience is that they hurt more if I wear the trainer type walking shoe rather than walking boots.  Maybe it's because I spend a lot more effort choosing my boots than I do my shoes.

Anyway Chris has given me something to think about - maybe I should invest in some good walking shoes as an alternative to boots and see how I get on.

I have speculated in an earlier blog as to how many pairs of boots I might need to complete the E4 walk. Chris helpfully provides some pictures of the impact on soles of about 1000 miles - not much left in the way of tread!
Posted by John Hayes at 5:20 PM