Across Austria - From Bodensee (Lake Constance) to the Hungarian Border

If  nothing goes wrong I should be in Bregenz, on the eastern shore of Lake Constance, by mid-July and ready for the "Austrian" leg of the E4.

As in Andalusia, at the beginning of the walk, there are two options - the Alpine or sub-Alpine routes.  Originally I was keen to do the Alpine route but to be honest I'm now having second thoughts.  Although the test run in July demonstrated that it is "doable",  bits of it are definitely at the end of my comfort zone - bits of it are scary.  It will also take a long time and the only itinerary I have found (Wikipedia) suggest 54 days and includes some incredibly tough days.

Information on the routes is hard to come by.  Information is produced by the Austrian and German Alpine Associations who have a joint cartographic function and they have kept a tight lid on it.  You don't get the freely available KML files for display in Google Earth which I have found so useful for planning my itinerary for France and Switzerland.

In terms of time I think the 54 day Wikipedia option will prove the worst case scenario and instead of 2 options (the Alpine and sub-Alpine) I think there are 4.

Firstly there are two variants to the Alpine route.  You can knock off (and still be on the E4) some of the most time-consuming and scariest bits of the Alpine route - the less tough Alpine option reduces the time by between 6 and 8 days. 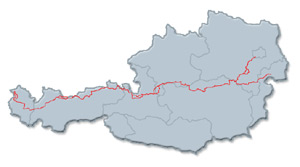 Secondly you could do the whole of the sub-Alpine route which runs parallel and to the north of the Alpine route. 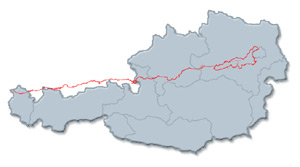 Thirdly you could adopt a new John Hayes variant taking you along the sub-Alpine route to the east of Salzburg and then, after a small detour, join the Alpine route all the way through the Hungarian border.
On the face of there are a number of attractions to the John Hayes variant.
Firstly it is definitely less scary (although you might achieve as much by avoiding the really high alpine bits of the Alpine route);
Secondly you get to walk through southern Bavaria along the Maximiliansweg and then, east of Salzburg, through the beautiful Austrian lakes;
Thirdly, by going along the second half of the Alpine route, you go almost directly to the kick-off point to the E4 in Hungary whereas the second half of the sub-Alpine route appears to take you on a detour close to Vienna.

The downside of the unofficial John Hayes variant is that although you always walking on the E4 you have joined the bits up in an "unapproved" way.

What I'm waiting for now is a couple of publications (in German unfortunately) which I'm hoping will give me enough information to decide what to do.  I guess the key thing I need to know is which variant will give me the best chance of getting to the Hungarian  border in time to complete the last leg of the journey.
Posted by John Hayes at 4:32 PM