A big 36 kilometre walk today, I chopped a bit of a Villanueva de Trabuca, and then inadvertently added it on again by going wrong at the end. This meant that having left Villanueva de Rosario at just after 9, I didn't get to the wonderful Hotel Rural Paloma until after six.

Having moaned about the extent of the road walking on some of the other stages, today's walk was a master piece in road avoidance and, ironically, it wasn't until I had to make good my mistake that I had to do a serious road stretch.

I have not really worked out the geography but the route seems to be taking me across, and along, a wide valley or plain between the Sierras Gorda in the south and some mountains to north. It's serious agricultural country, mainly olive trees, but also winter wheat. Lots of olive oil factories, as the first picture shows, you can also see that the weather remains grim, not as wet as yesterday, but wet. 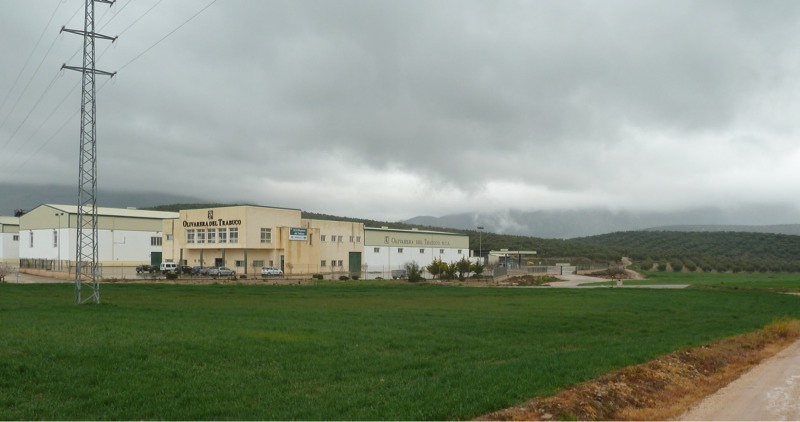 Providing your walking amongst the trees on nice paths, which I was today, this is good walking country, even better when the farmer hasn't got around to getting rid of all the wild flowers. 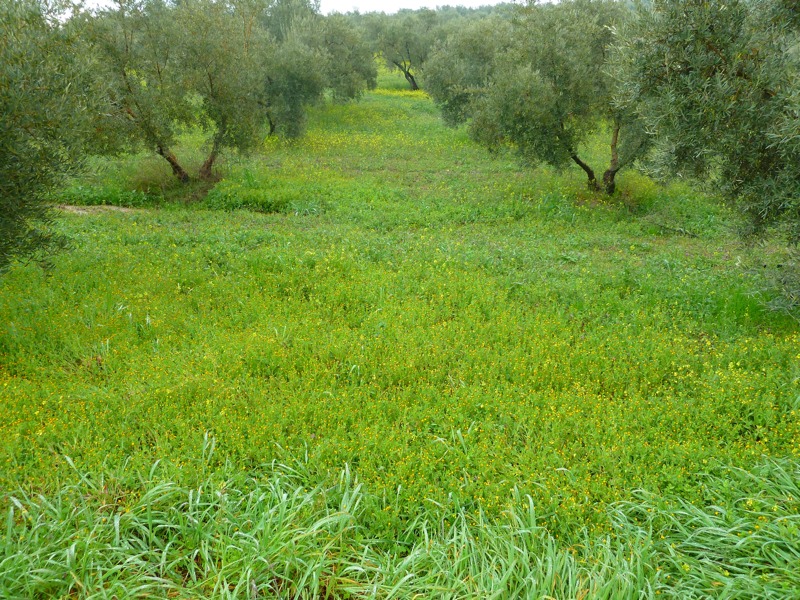 I had said that spring, using the ash tree clock, was at least eight weeks ahead of the UK, now I'm not sure. Maybe it is because I am a bit higher up than when I was but the field of wheat below, and the trees behind, don't look that far ahead of the UK. 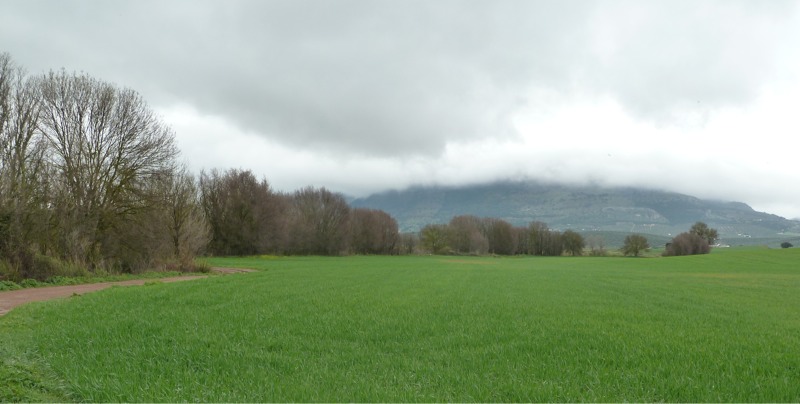 As well as fields of olive trees, some lovely evergreen oak woods, the route took me underneath a motorway, via a flooded underpass, and underneath a brand new highspeed rail line. The rail line was so new that the tracks hadn't been laid and it's route was not on the map. 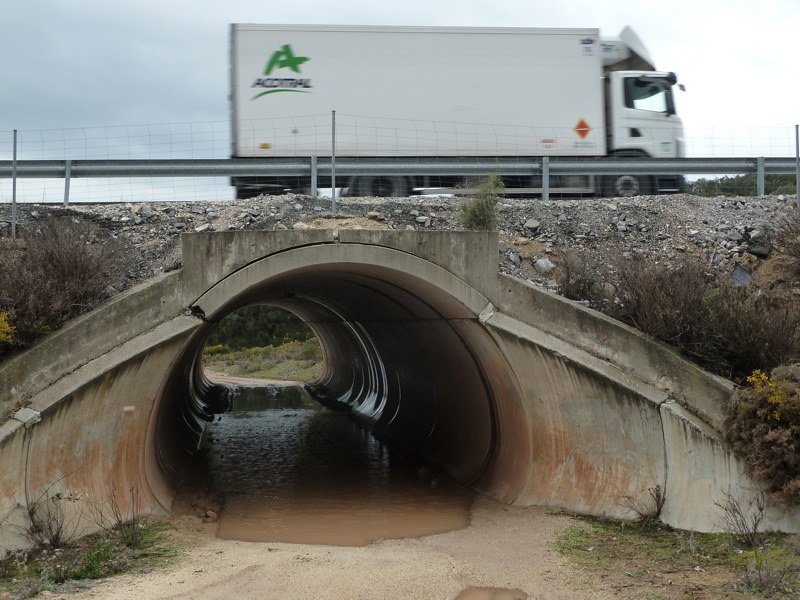 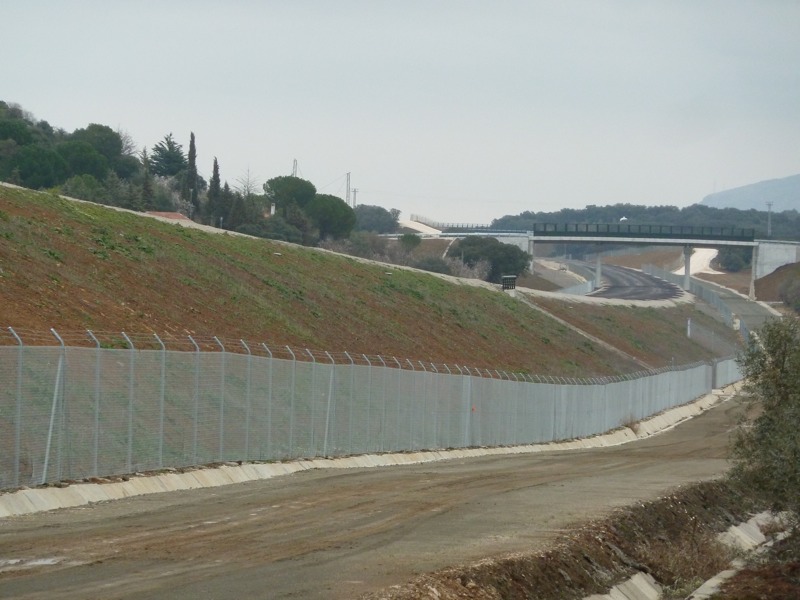 Had my best dog moment so far, a village with about twenty houses, managed to get every dog barking in every house. Went through it, realised I had gone left instead of right, had to walk through it again, the dogs, which had only just recovered from the first session, thought I was doing it on purpose. 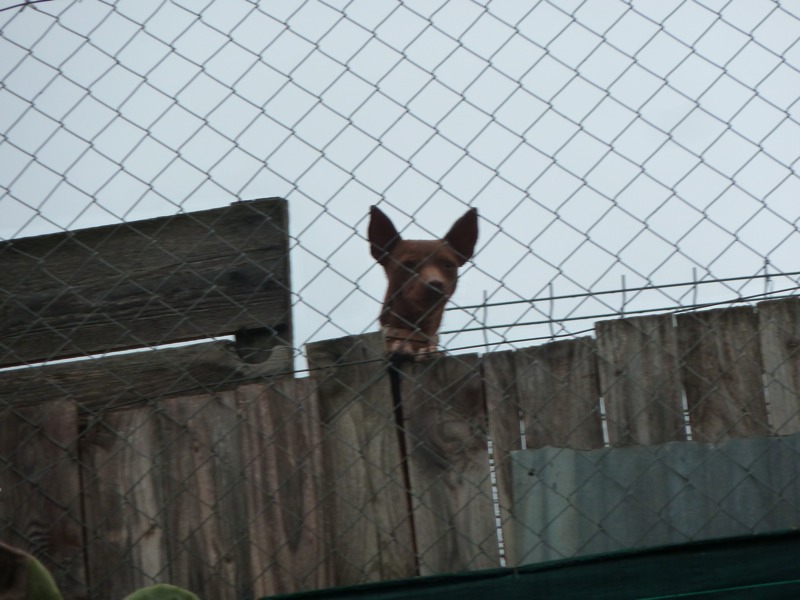 So the cock-up. The cock up was that I hadn't worked out where the hotel was and thought that I would walk past it on the way into Villanueva de Tapia, which is what the Cicerone Guide implies. In fact it's about 50 metres of the route but about 3.5 kilometres to the south of the village, which I got to just as the skies opened up. This was a near disaster as I still didn't know where the hotel was and the truth of the matter is that the Spanish, in general and in my experience, speak English as well as I speak Spanish. In the end I was able to make myself understood through the medium of the GPS and getting them to show me the location. It was then a sharpe walk along a busy road, in the rain, back to hotel.

Well the Hotel Rural Paloma has been well worth finding. The first thing they did was make me a pot of tea, give me a large piece of orange cake and sit me in front of the fire, brilliant. The dinner was also excellent, the best I have had so far in Spain. Lots of fresh vegetables: pasta with globe artichokes, lamb stew with carrots, cauliflower and potatoes, and a creme brûlée to finish.

It's not hard find but just remember if your travelling south to north you don't go to Villanueva de Tapia. You will have been walking alongside a railway line through evergreen oak. The route suddenly turns right and after about a kilometre you hit the main road and head towards Villanueva de Tapia. After about 2/300 metres the signs take across the road and the route takes you cross country to the village. Instead of crossing the road you need to stick on the main road and the hotel is on your right after another 50 metres. You can see it from the route, but of course I wasn't looking and expected to walk past it.

Nice short walk tomorrow which is just as well because the weather continues to look bad. Desperate to get some socks washed and dried.