Because I'm two days ahead of schedule I'm putting in a couple of short days, today and tomorrow, and staying at the Staufnerhaus, a hut run by the German Alpine Association. It's very much like the refuges I stayed in while crossing the Pyrenees and along the Jura Howenweg but because it's now in the walking season and on a Friday it's full. I'm sleeping in the dormitory, at the end of a giant bunk bed which sleeps thirteen people on each level. The end spot is a prime one but maybe the management have heard about the imminent arrival of a smelly Englishman. Fortunately footwear is not allowed in the sleeping area.

The really good thing about staying here is that I start a spectacular ridge walk tomorrow almost from the doorstep. The hut is at 1600 metres and after climbing a couple of hundred metres to a peak called Hochgrat and, if the weather is good, could get to enjoy a twelve kilometre ridge walk, including a little climb up to another peak called Rindalphorn, before dropping down to Sonthofen. Walking 5 and half hours today and climbing in total about 1200 metres I've basically done all the hard work for two days of walking.

I don't have a GPS trail on my IPod for the German or Austrian stretch of the E4. While I'm pretty sure I could have got across Switzerland just using the signs it's a lot harder here. Even with a map it's confusing and around any sort of settlement the density of routes is so great that you constantly have to check against the map to see where you are. I think the local trails have yellow markings and the national trails red ones but there seems to be a lot of national trails. So I'm currently walking on the northern variant of the E4, the alternative to the tougher slower southern Alpine variant. I'm also on the local higher variant of the northern variant of the E4, which at the moment is also the Alpenweg 04 and the Maximillianweg. I'm also from time to time sharing the route with the Via Alpina, another set of long distance trails. No wander it can get a bit complicated on the ground.

Anyway I got here, it's not raining although it's not very warm either.

The next village along the valley from Lingenau is Hittisau but instead of going along the valley the route takes you up it's side through the trees before dropping down again. Nice view down to Lingenau.

Hittisau is another place with lots accommodation and I guess I could have stayed there yesterday if I was trying to get to Sonthofen today.

The walk then takes you up the lovely Lecknerta Valley, past the Leckner See, and here you can either stick with the lower E4 variant in the valley or head up the side to the ridge and Staufnerhaus for a walk along the top.

On the way up to the Stuafnerhaus you cross the border into Germany marked with a scruffy sign. 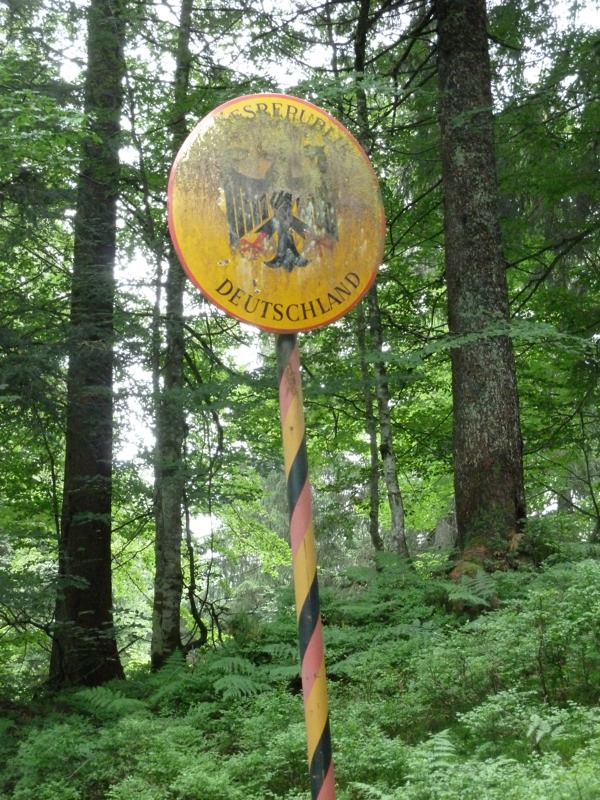 Arrived at the hut at about 2.30. Accommodation to Austrian Alpine Club Members (like me) costs 8 euros which means that tonight is the first time I've been within budget since leaving France.

There are definitely people staying the night up here on the mountain who are not walkers, have come up the chair lift to have a special night sleeping in a dormitory, takes all sorts.

Interesting night in the dorm. I will try and describe it for those people who have never done it.

Your sleeping with a mixed group of people, men, women, children, different ages, different physical shapes, all confined to a fairly small space. A lot of people are in walking groups and know each other so there is a lot of noisy whispering until things settle down. There is little point in going to bed early, unless your an amazingly sound sleeper, as the last people to come up, although they try to be quite, will, alcohol fuelled, still wake you up.

You should try not to look but a mixed group of people going to bed is not a pretty site. Huge lager cultivated bellies, rolls of sagging white flesh, spindly legs - stuff of imminent nightmares.

And then the noise of sleep, snoring, farting, grunting and shuffling. If you want to get back to nature then share a room with thirty other people.

Thought I never would but actually had a good night's sleep. Sleep to about 5, awoke just as it was starting to get light, and listened to the symphony. Not like the dawn chorus, more base tones.