So straight to the heart of it, a truly embarrassing navigational cock-up, embarrassing in particular because for once we were not able to keep the blunder a secret.

Parties to the blunder are: atrocious weather conditions, rain, hail and visibility down to ten yards; an emergency prefabricated cabin (like a work mans' hut at the side of a UK road) at Fleischer-Biwak on the map below; the summit Hochschwab; and Schiestl-hutte, also on the map below. 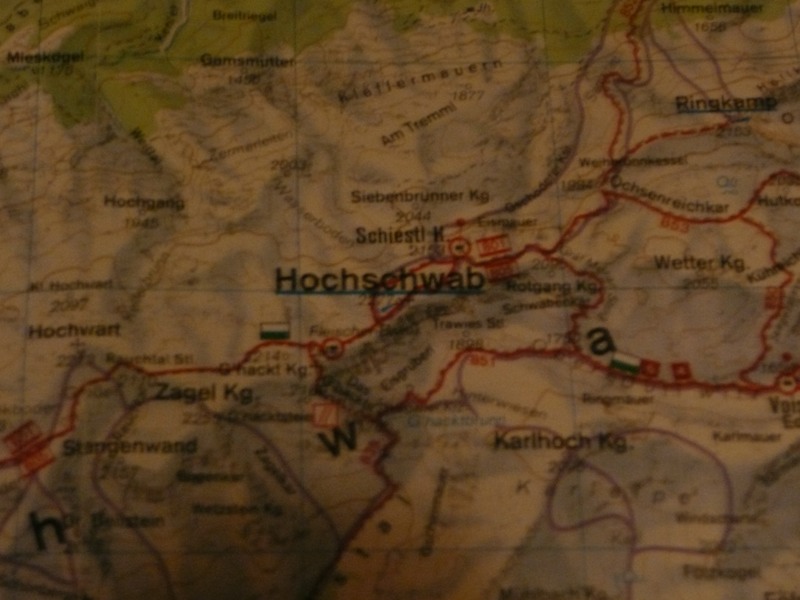 After a reasonably fine start the weather got really bad. Firstly the mist came down so we couldn't see a thing, then it started to rain, and then with hail it got really cold. At about 11.30 we passed the Fleischer-Biwak (workmans hut ) and it was crammed with cold wet walkers huddled together for warmth. No room for 2 bedraggled Inglisches. In the mist we had no idea whether we had climbed the Hochschwab, which at 2277 metres was the second highest point on my version of the E4 trail, but as we were soon climbing steeply again it was apparent that we hadn't.

Christine was grimly marching on and went straight past a sign saying Hochschwab, I thought she had done this on purpose as why would you go high in this weather? The route she was following was for the Schiestl-Hutte, on the way to Vosthaler Hutte our final destination. 30 minutes later we see a sign saying 1 hour 30 for the Vosthaler Hutte. Encouraged we pressed on. Slightly surprised we hadn't seen Schiestl-Hutte and more surprised we were still going up rather than down, we carry on in our misty cocoon. Another 30 minutes latter we reach a summit with a cross, I rationalise this by thinking there must be a second Hochschwab type summit, although can't remember this from the map (much too wet to get it out), and start to head down the other side. We get to a junction which disappointingly doesn't give us the time to Vosthaler Hutte. Instead a sign says Schiestl-Hutte. Seeing our bemused look a man says we could go the other way to Vosthaler Hutte but it's a very steep descent and instead suggests we go to there via the Schiestl-Hutte route. After a few minutes along this route Christine objects, fed up and wanting to just get there, and says let's go down the steep route so we retrace out steps. After 100 metres or so down the steep route we see an emergency prefabricated cabin full of people sheltering from the rain...... two on the same mountain! A few yards later I see a sign to Sonnschien Hutte and at last smell a rat. We are back exactly where we started from about 90 minutes earlier.....and heading back to where we came from!

Force our way into the shelter and after a few conversations our 360 degree trip is confirmed. The mist begins to lift in every sense. All of a sudden we realise we have walked around, climbed, and come down again back to the starting point. Christine didn't think it was very funny.

So back we went retracing our steps ( and did some bits for the third time). by now we were very cold and tired so it was a blessing when about 20 minutes later the cloud lifted and we started to see our surroundings properly for the first time for hours. There ahead of us round a curve on the side of the mountain was the Scheistl Hutte standing proud overlooking a valley. Couldn't miss it.

We laboured on, feet and hands still numb, and started down a long steep trail. The initial uplift generated by knowing where we were evaporated as the reality of a tricky climb down started to bite. The air filled with groans, moans and curses which is how Christine usually copes with such adversity.

Almost as if to tease the sky cleared and the full drama of the landscape was revealed. The huge cliff up to Hochschwab now dominated the skyline and on top you could make out the cross we had walked around a couple of hours earlier.

Once down we spent the last 30 minutes walking along a magnificent dry limestone valley down to the Voisthaler Hutte. Chatted to a charming Austrian couple who were in the Sonnschien Hutte with us last night. He had the maps and route on his IPhone, really good value. If we had had that we wouldn't have got lost. The product wasn't available when I left England in March. It's time I got home.

By the way, before it started to rain this morning, we saw mountain goats, the local name is Steinbock, they had a very strong goaty smell.