Elementary school boy navigation error almost too embarrassing to mention both undermined team moral and froze communications for a significant part of today's walk. No problem finding the 01 markings in the middle of Spital am Pyhrn and only had to choose the direction of travel, only two choices and I made the wrong one. Marginal defence was that the guidebook definitely implied that you travel south out of the town. Unfortunately if I had looked at the previous day's schedule in the guidebook I would also have been able to work out that Wurzeralm, the destination on the sign, was on the route heading west, away from Budapest rather than towards it. But why would I bother to look at a schedule I wasn't going to walk?

Anyway we walked 3 kilometres along a hot road in the wrong direction before I finally accepted the fact we were going the wrong way. I was of course very apologetic but my mood darkened when my co-walker insisted that she knew all along we were going wrong.

The two way sulk continued all the way back to the village, all the way up to the Bosruck Hutte (not significantly relieved by wurst and kraut) all the way to Rohrauer Hutte, and only started to melt going down the other side when the clouds blackened and rain began to fall. A huge thunder storm brought the team back together when we had to agree where to find shelter.

Going down the other side was the highlight of the walk. The route takes you over a pass and down the west side of Halle Mauern, a group of mountains which were spectacular in shape and colour. The cloud only added to the drama swirling around the gaps between the mini-summits. 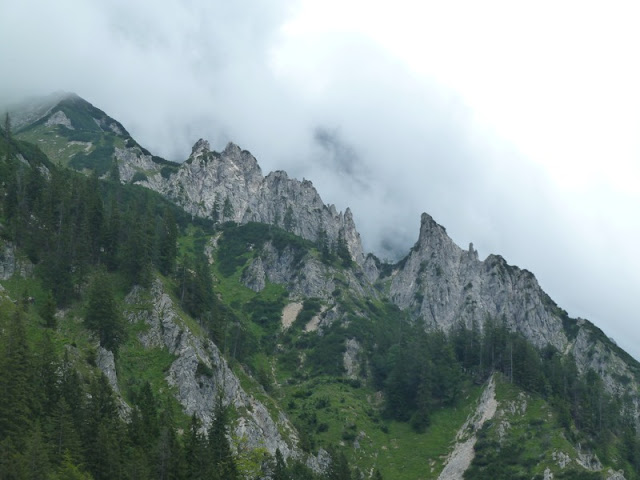 Anyway made it to Admont, through the rain, by 4 o'clock. Has a fine church surrounded by a splendid baroque monastery containing a museum and the largest monastery library in the world. It is in an incredibly important building and is why people visit Admont. We looked inside the gate and then pressed on to find the gasthof to get dried out.

Medical update: Christine's knee remains sore but has stood up to 30 kilometres and a climb and descent of around 700 metres so reports of it's demise may be exaggerated.

Took the picture below out of the bedroom window after an enormous dinner.