We did toy with idea of walking back up from San Benedetto in Alp back up to the GEA but if I'm honest we didn't toy with it for long. We don't have a map for this section and wanted to keep things as simple as possible. It did mean we missed the waterfall that makes San Benedetto in Alp famous. Instead we made an early start and a little bus back up to Passo del Muraglione and had a coffee in the bar there.

The passes are very popular with motorcyclists, I guess they like the endless hairpin bends on the way to top. Understanding his customers the barman in the bar at Passo del Muraglione has festooned the place with the autographed photographs of many heroes of Italian motorcycling.

In the bar a fungi hunter mistook me for one of his own, I'm clearly starting to blend in.


Today's walk was a easy six hours and for once we kept pace with the timings in the guide book. The trail was again mainly wooded although we were occasionally treated to some open views and even a field full of the traditional white Italian cattle.
As well as men on huge road bikes we were also joined today by much less welcome men on trail bikes, huge knobbly tyres ripping up the path. 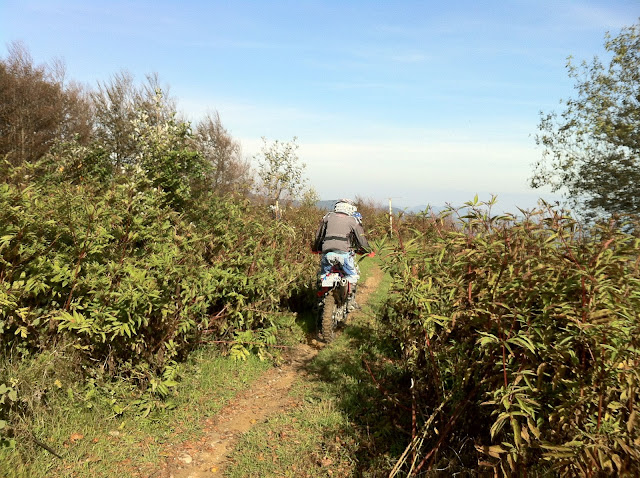 The best views were about an hour from the end when everything opened up and we could see north along a valley to the pretty little town of Casaglia.
Really nice hotel at the pass, the Locanda della Colla, another venue for bikers. We arrived at about 3 and sat outside consuming far too many beers. The only other guests were a party of German motorcyclists all equipped with huge motorbikes and supported by a back-up van. Looked very well organised.

The evening meal was also excellent. I have really taken to the tagliatelle with a porcini sauce which I eat whenever I get the chance.

- Posted using BlogPress from my iPhone
Posted by John Hayes at 7:26 PM