Lack of accommodation at both Badia Moscheta and Passo della Futa meant for a short four hour walk to Passo del Giogo. Of course we did manage to make it a little longer.

After settling our biggest bill to date (yesterday's beer) we set off in the wrong direction from the lovely Locanda della Colla. Ten minutes later we were back saying our hellos and goodbyes to a party of German motorcyclists amused at our navigational excellence. 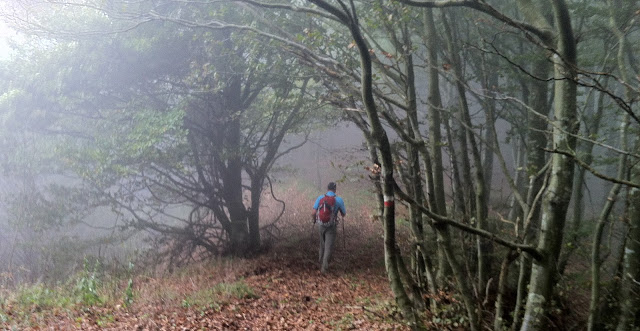 After two kilometres of road walking we were on the route proper, an easy to follow forest road. After a hour we followed some markings off the trail and deeper into the forest. We still don't have map but had no reason to doubt the markings. We disturbed a large wild boar which crashes through the undergrowth fortunately heading in a direction away from us. After climbing to a mist shrouded summit we start to drop steeply down and south and suspect that something is wrong. Eventually we find a route number and, after some head scratching have to accept that it's the wrong one. Retracing our steps all the way back to the main forest trail, we discover that a sign had fallen over, had been repositioned against a tree and was know pointing in the wrong direction. We had been fooled by a false sign!
Further along the trail we meet a group of elderly walkers all with identical neck scarfs held smartly in place by toggles. After a brief conversation and references to Baden Powell it is established that they are indeed guides and scouts.

Just before arriving at the Passo del Giogo we are reminded by information boards that we are walking along the Gothic Line, a coast to coast defensive position constructed by the German army towards the end of 1943. A reconstructed bunker provided an impression of what things must have been like but the photographs on the boards were more graphic. One of the features of the line was the complete removal of trees, a literal scorched earth, and the photographs provide a complete contrast with what is here today. Passo della Giogo was the site of a major battle as the Allies eventually pushed through in September 1944.
Passo della Giogo also turns out to be the place for motorbikes, putting the last two passes in the shade (although it is a Saturday). Motorbikes are screaming past almost constantly. A few stop and the car park to the hotel is full of heavily armoured bikers waddling around under the weight of their gear and gripping a panini.