I guess it's something to do with a military career but Chris does like to keep up appearances. A couple of things worth noting: firstly he doesn't like to hang washing from his rucksack when walking through towns; secondly he doesn't like hanging those waterproof map cases around his neck. Today I finally persuaded that ready access to the map would have a real impact on his navigational effectiveness and, despite offending his sense of decor, he agreed and took us almost directly to the intended destination. 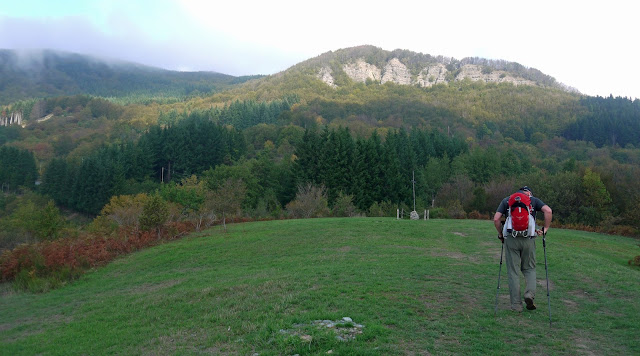 Better weather today and despite another walk through trees we even got some views. Having lost much height yesterday in the descent into Montepiano we had the inevitable tough climb back up the ridge today. It was a tough opening hour or so. At the top we met a fungi hunter and when we told him where we were going there was the usual sharp intact of breadth. I'm not sure why locals so often give do this but generally speaking I treat with it a pinch of salt. Chris on the other hand took it more seriously and needed a bit of persuasion about sticking to plan A. 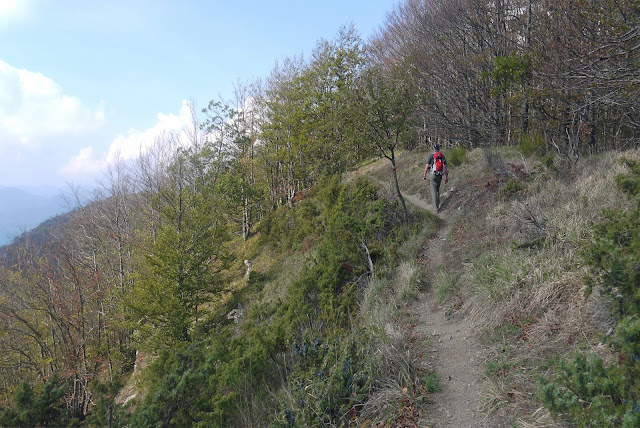 Once we were on the ridge there some good views, a bit misty so not perfect, but after yesterday it was a big improvement. It was a nice trail as well, often along an old farm track with abandoned buildings and terraced fields, evidence of a time when the countryside was a lot busier than it is now.

We stopped for lunch at the pass at Tabernacolo but didn't make use of the armchairs which had been left inside the chapel. They had clearly had been put to a variety of uses in the past and by a variety of different types of user.


Migliana is a lot way off the the GEA and we left the ridge and headed south east from a pass at Le Fosse along route 52. The route was obviously an ancient abandoned road and although decaying much of the old stonework was still intact.
Route 52 took us down to Luicciana which doesn't look anything on the map but turned out to a pretty little village with a hill top church. The population looked ancient and I'm not sure if they had had much say in the selection of the artworks, including an interesting series of nudes, which had been attached to the outside of many of the buildings. 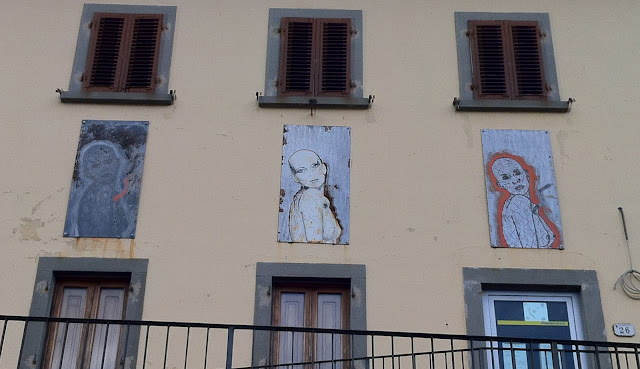 After four or five kilometres along an empty country road we end up at Migliana which is perched high up on the mountainside. We ring up the Agricturismo Castilgione and get the impression that it's somewhere much lower down. Approaching a man in a pick up truck for directions there is just a hope that we might get something more and sure enough we do. He gives us a lift all the way down the mountain, 5 or 6 kilometres, a knee crunching descent which would taken well over an a hour. I just wish I had the Italian words to properly thank him.

Turns out to be a nice evening as well. The Agricturismo Castilgione is a beautiful old building, the core of which is a castle, over 1,000 years old, which has been painstakingly restored by the current owner. After producing a lovely dinner for us on the veranda he describes how, over a 30 year period, he transformed the building from a wreck into its current state.
Posted by John Hayes at 10:02 PM