The Old Ways - A Review

If you like books about travel (especially about walking) and you haven't read "The Old Ways" by Robert Macfarlene, then I would strongly recommend it.  It's a really interesting book which I finished almost in one sitting. 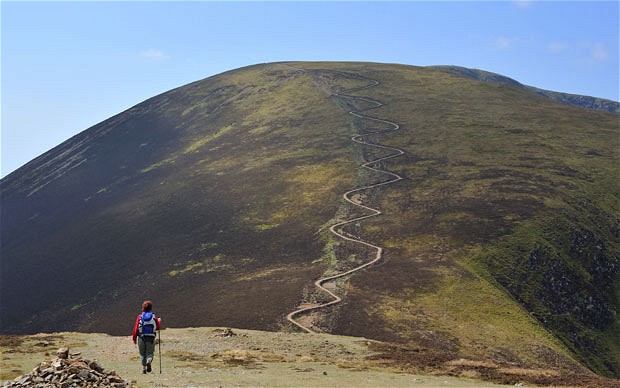 I haven't read any of Robert Macfarlene's books before and came at it with some serious misconceptions.  I was expecting a book about pathways - the sort of pathways I trudged along for 5,000 kilometres across Europe.  I had been fascinated by our universal walking heritage and the fact that walking 20-40k a day, often carrying huge loads, was something most people did for centuries if not millenia, but which has now largely disappeared in the "west" at least as, over the last 100 years or so, the countryside emptied.   There might be a book to be written about the end of "economic" walking - the transformational replacement of people and animals as "beasts of burden" - but I suspect it wouldn't be as interesting or as much fun as "The Old Ways".


It's hard to pin the book down but it seems to be an exploration of how our interaction with landscape, including the physical act of walking, shapes who we are.  Pathways are a specific shared interaction, passed down, marked out and learned by successive generations.

The book consists of a series of journeys along pathways with a distinct underpinning "geology" each brought to life by Macfarlene in powerful and interesting ways. In addition to geology, flora and fauna he pulls in archaeology, architecture, art, literature and even town planning to bring his walks to life.

Midges and a desire to avoid bad weather have limited the number of trips I've made to Scotland but his descriptions of the Isle of Lewis and the Cairngorms were wonderful and made me realise what I've been missing. Even more interesting were his new insights into walks already familiar to me, including his trips along the Icknield Way and the South Downs Way.

The book is also about his 'virtual' and real walking companions and what they bring to the walking experiencing. His most important companions are Edward Thomas the nature writer and poet and his grandfather.

Edward Thomas in many ways is a tragic figure who manages his depression by taking long walks (a bit of a theme for Macfarlene).  Macfarlene's description of the South Downs Way is interlaced with events from Thomas's life.  I found the way he linked together the end of his own downland walk with Thomas's own journey to the chalk of northern France, and death on the first day of the Battle of Arras, particularly moving.

Macfarlene is writing in the romantic tradition and at times takes us on a journey some would see as nostalgic, quaint, whimsical, fanciful and, ultimatly, nonsense.  His comparison of the act of writing with the act of walking is whimsical while the notion that the "transition from a perception exercised by the self upon the stones to the perception exercised upon the self by the stones" strikes me as beyond the pale.

Macfarlene acknowledges his own landscape mysticism when he contrasts his interest in the relationship between landscape and individual lives with that of his grandfather, a total hero to Macfarlene but an uncomplicated one, someone interesting with a very full life but whose relationship with landscape was simple - he just loved landscape with a passion.

Macfarlene acknowledges another problem with his landscape mysticism when he talks about the tension between roaming and homing.  How do we manage the love of a landscape we have become familiar with and want to experience time and time again with the desire to experience adventure and see something new?

Robert Macfarlene is clearly a gifted writer and happy to wear his heart on his sleeve. You might find yourself smiling or even laughing at inappropriate moments, but if you enjoy landscape,  brilliant description and can cope with a bit of syrup (see below) than you will love this book.

"Twilight: the sky streaked purple and crimson.  The tobogganers on the opposite hill yelled and slid and laughed. A boy in a duffel coat ran down the slope with his arms outstretched.  Lift is created by the onwards rush of life over the curved wing of the soul"