It's cold at the moment in Spain and in Leon, where I stayed last night on the way to the GR1 Sendero Historico, all the women of a certain age were decked out in fur coats. Leon is an attractive city, an interesting and ancient centre with a stunning Gothic cathedral. We did a quick tour as the sun was going down and the light coming through the stained glass was wonderful.

Leon is on the St James's Way and the pilgrims were everywhere even this early in the year.

For the first few days on the GR1 I'm with my Spanish friend Juan Holgado who has organised everything. He found a particularly good place to eat last night, a bar full of locals and serving Leon specialities. The atmosphere was distinctly Spanish. All ages and types were present: family groups; groups of women; young couples; solitary drinkers; grandparents with tiny grandchildren; and all ignoring the television blaring away in the corner and all chucking debris on the floor, a compulsory bar habit bizarre in a country which has an obsession with cleanliness.


The food was excellent. To scandalise horse lovers back home I tried Cecina de Leon, an intensely smoked horse ham; then had what I think was pickled squid dressed with huge quantities of paprika and served with a special potato; and if that wasn't enough I also sampled a very lightly cooked omelette flavoured I think with truffles. Not a green vegetable anywhere so I finished with a mango sorbet to compensate.

The television news at breakfast in the hotel bar reported on snow as far south as Andalucia, and general chaos, but in our corner of north-west Spain the weather was perfect, cold but with clear blue skies. We caught a bus and then a train which took us along the narrow gauge line which runs all the way to Bilbao (my third gauge since arriving in Spain!). The track was originally built to take coal from the mines in Leon to the foundries at Bilbao but now connects the little towns. It's a nice journey particularly today with the sun on the snow covered mountains. 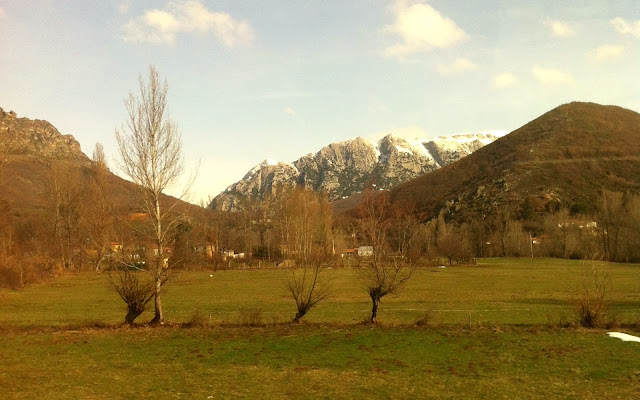 Leaving the train at Guardo we got a taxi up to dam above the town and started our walk. After two hours or so on the train it felt cold, cloud covered the tops of the mountains and there was more than a hint of snow in the air. After walking along a icy road for about 5 kilometres we spotted a "cantina" in the little village of Valcobero and we stopped for refreshments. 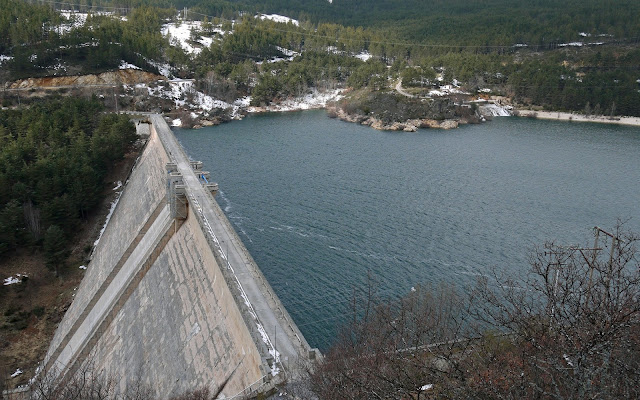 There were three men in bar, 75 per cent of the population of village and it felt like they had been waiting months for some new customers. We ordered half a litre of wine which was topped up with the Spanish version of grappa - evil stuff. Juan chatted to the three men and the conversation seemed to get increasingly animated. Talk of the eagle which we had seen on the approach to the village turned to vultures which had apparently run out of dead animals for food and were now attacking things that moved. Must admit I wasn't convinced but Juan was. 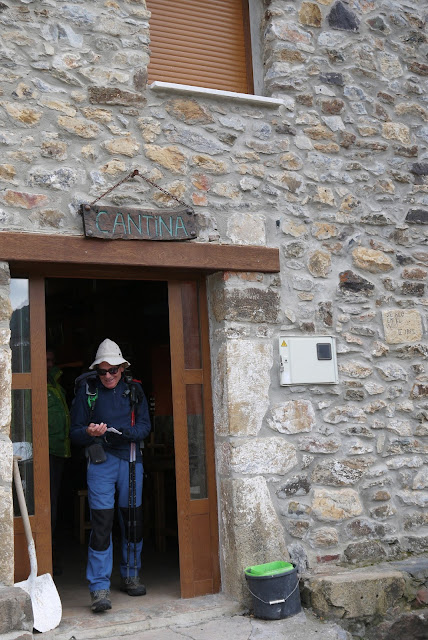 After about an hour we returned to the trail and I'm not sure whether it was the alcohol or the climb up the hill through the snow but at last I warmed up. The scenery was now wonderful. 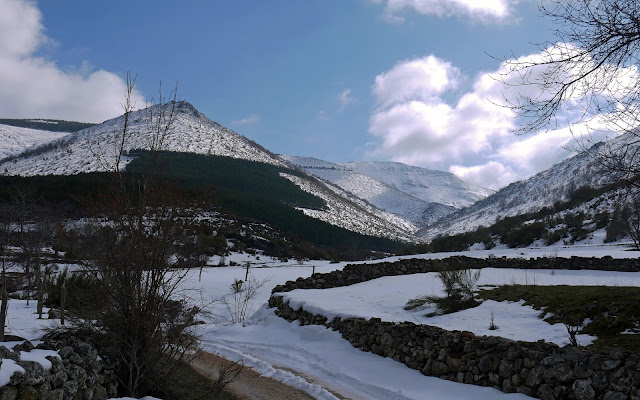 After a couple of hours and around 600 metres of climb we made the top of the pass and at 1700 metres this could be the highest I get on the whole trip, and on the first day as well.

Enjoying an easy descent from the pass we were soon in the abandoned village of Valsurbio where we disturbed a fox eating its kill and surrounded by pink snow. The derelict church, roof long gone, gave the village a spooky feeling broken dramatically by huge deer with massive antlers crashing away from us through the trees.

Another 30 minutes and we amongst pine trees with a distinct rust coloured bark. I need Christine with me to tell me what sort they are, Corsican perhaps. Under cover of the trees the deep snow disappeared and it was easy walking all the way into Camporedondo. 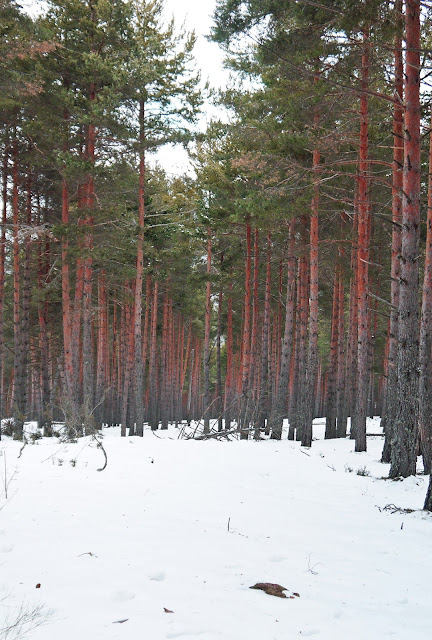 So a great start to the trip and it feels like I have packed a lot into the first 36 hours. The accommodation tonight is excellent, nice and warm, although they seemed to think I was mad when I asked if I could eat at 7. All I've eaten since breakfast is a plate of olives so I'm definitely ready for some food.

Posted using BlogPress from my iPhone
Posted by John Hayes at 7:16 PM