Not such an interesting day, it was very cold, there was a strong biting wind and it snowed for most of the morning.

To be honest there was not that much incentive, in terms of the scenery, to take your gloves off, get the camera out and take a picture. It was fairly flat and the scenery was the same from one end of the walk to the other. 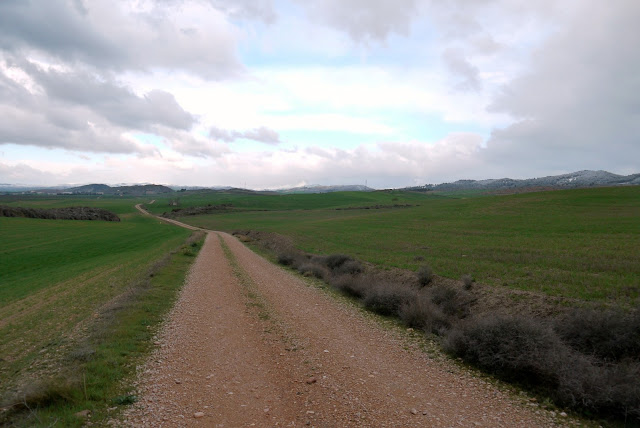 Generally speaking the route went due east, the right direction for the Mediterranean. It did however do a huge U bend in the middle of the morning and for no apparent reason. It could have been an excuse to visit the remains of a Roman Villa, which unfortunately was shut, or to take in a little wetland park (the four resident ducks flew off before I could say hello). Alternatively the route planners might have wanted me to meet the scariest dog in Spain. It was huge, very upset and being egged on by two normal sized dogs which were about a tenth of its size. If the fraying bit of rope holding it back had snapped than the monster dog would definitely have ended my trip along the GR1.

One thing I have worked out is the settlement pattern in Navarre is basically the same as the one I got used to when I walked through Spain a couple of years ago. The countryside seems empty with people living in small densely backed towns which are often some distance apart. I guess this is either to do with lack of water or the historic need to find a defendable location. What it means is that the towns are more than big enough to sustain a bar, or three in the case of Allo, which is where I stopped for my mid-day break. My concerns about the demise of the Spanish rural bar have happily been exaggerated.

Another big detour in the afternoon, but that was probably driven by the need to find somewhere to cross the Rio Ega. Anyway once I got past the interesting abandoned farmstead at Baigorri it was a straight run through a gale to Larraga. 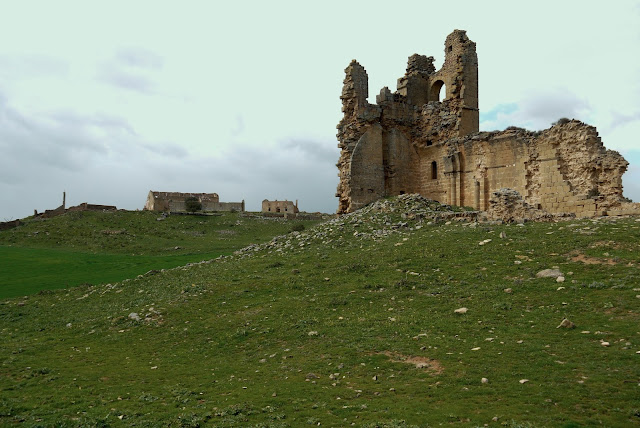 Despite my rucksack and walking poles the landlady at the hotel wanted to know where my bike was. I can see her point. On a less windy day Navarre would be perfect for cycling. The countryside perhaps is not quite interesting enough for walking but if you were cycling this would matter less and you would get the chance to visit more of the towns.

If you want to see where I went today, another 40 kilometre plus day, than please go to target="_blank" href="http://my.viewranger.com/track/details/Mjc1ODIy">linkthe following

- Posted using BlogPress from my iPhone
Posted by John Hayes at 4:40 PM