We also thought Juan had taken the good weather with him back to Madrid. It rained heavily all night and the forecast for today was terrible. It actually turned out to be OK.

We planned to walk to Ager, and then get a taxi to Noguera-Palleresa. We have a big walk tomorrow and two heavy days in a row would be a bit much for Christine who has only been walking for four days. We had a great day's walking although our accommodation at the day's end was a bit "different".

Leaving Puenta de Montañana, walking south along a nice trail near the river, we then had to walk for five kilometres along a road. Disappointing considering the rest of the walk was amazing.

One thing about not doing much research before you set off is that you never know quite what to expect. I knew we had a gorge walk but this one far exceeded my expectations.
Leaving the road the trail takes you across an amphitheatre of cliffs with an inviting gap towards the south. To the north, high on the cliff is a watch tower, the Castell de Girbeta and below a church with an impossibly long name. The trail is muddy and for just for a few minutes we miss the sure footing provided by road.
All those thoughts disappeared as soon as we turned the corner and entered the gorge. The massive vertical cliffs, 500 metres high in places, crowd in on you, with the gorge no more than 20 metres wide in places. Crashing along the gorge bottom, muddy coloured with last night's rain, is the River Ribagorcana. The views up and down the gorge are amazing and the clever positioning of the Castell de Girbeta becomes particularly apparent.

Perhaps the star of this amazing show is the path itself. It has been carved out of the cliff mid-way up the gorge. I know some people who would have suffered vertigo from the walk but it didn't seem to bother the Spaniards who were rushing along the trail with small children. 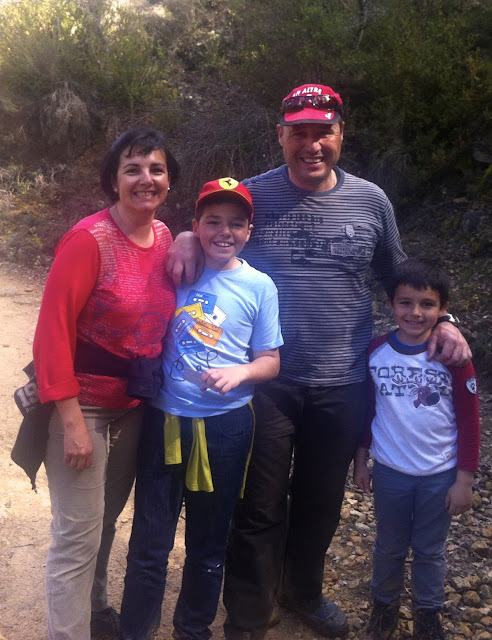 Special mention to one particular family we stopped and passed the time of day with - very impressed with our walk across Spain.
Eventually, after 6/7 kilometres the gorge starts to open out. Right before our eyes a man leaps off the top of the cliff happily opening his parachute just before landing. A lot of typical Spanish shouting up and down the cliff but there was no second mad jumper. Extreme sports seem to feature along this trail as evidenced by the rope trail which went up the face of the cliff on the opposite side.
The cliffs which had been so close together opened up like a giant horizontal fan - symmetrical but growing further and further apart. Great views, the only challenge was a huge gorge, down one side and then up the other, and the drama, all of a sudden was over
After stopping for coffee at Corçà at 2. 30, we set off on the final part of the walk down to Ager. Nice walk, different to Juan's trail, up the side of the valley and along an old track. It was now warm and the heat and the moisture from last night's rain triggered off three sharp showers in the space of 90 minutes.
In the bar in Ager we asked about a taxi and were told that there wasn't any. The woman behind the bar went off down the road and found someone, the owner of a local auberge, who was willing to take us to Noguera-Palleresa.
To be honest we did regret not staying in the auberge in Ager and asking the man to take us down in the morning. The "bungalow" we are staying in is really a garden shed but we are making do. We had our earliest ever Spanish dinner, pizza in the bar at 7.30, and I suspect we will be away at about that time in the morning.

Posted using BlogPress from my iPhone
Posted by John Hayes at 6:00 PM