Today's walk was a tough 11 hours, the toughest of the trip (so far), and Christine was in open revolt by the time we struggled into the casa rural.

The story of the day is how long it was. I would like to report on the brilliant views but low clouds blocked what would have been amazing views of the Pyrenees.

I did know today was going to be long. When Juan did it he got a taxi at the Coll de Comiols, the only place on the route where you cross a significant road, and that would have taken a couple of hours off. Juan and I agreed however that organising a taxi on Good Friday would be very difficult and even then it would have to take us a long way to find somewhere to stay. The better but painful option was another 8 kilometres (or so) down to a casa beyond Sant Cristofol.

Knowing it was going to be a long day we left our bungalow (garden shed) early at Noguera-Palleresa and were walking by 7-45 (biscuits and a carton of orange juice for breakfast). We walked along the road for about a kilometre and then started to climb.

This was the best part of the day but energy sapping. The path took us up the valley past some ruins to the face of a huge cliff. We were still relatively low at this point, spring flowers were coming out and we walked up through scrub full of viburnum bushes in bud. 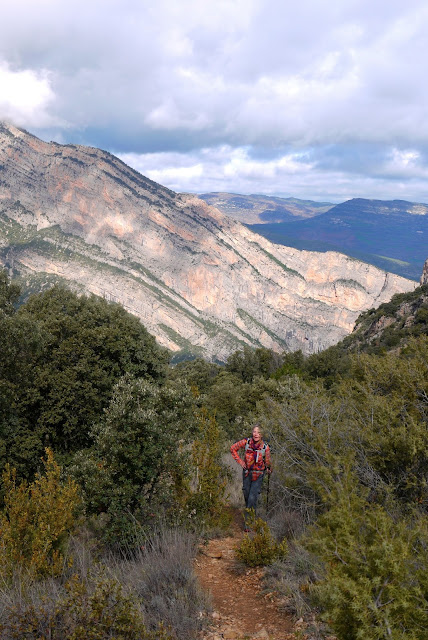 We were climbing up a massive fan shaped gorge, with symmetrical cliffs on either side with each set converging to a point in the north. We saw a similar feature as we emerged from our gorge yesterday.
After an initial 500 metre climb our path took us north along the side of the eastern flank of the gorge before climbing over it and heading east. Ahead of us was another massive cliff, even higher, which we somehow had to get over. After dropping down to a stream, climbing gently to the abandoned village of Rúbies, the path turned directly towards the cliff. It was a steep climb up a gully, in places almost a scramble, although you wouldn't want to scramble too much as it was clearly a popular route for the sheep and goats.

Eventually we crossed through a crack in the cliff and onto the dip slope on the other side. We had been walking for 3 hours 30 minutes, climbed over 1,000 metres but still had, as it turned out another 33 kilometres walking to do. We sat on a rock and devoured bread, cheese and tomatoes.
We walked east and gently down. The views north could have been brilliant but were blocked out by persistent low cloud. Nothing to do but walk and the only frustration was poor way marks, they are as bad here in Catalonia as they were in Navarre.

After the slow pace going up we were eating up the kilometres and at one point I made a rash, and typically over optimistic assessment that we might arrive by 5. As if by magic the kilometres grew in length.


The first milestone was Hostal Roig, which I remembered well because at one point I thought it might offer accommodation. Unfortunately it hasn't had a roof for a long time. After a couple of kilometres on a road the route then took as around a U bend and we spent 20 minutes getting back almost to the point where we had started. That turned out to the signal for the beginning of a frustrating final third of the walk.

The pass at Col de Comiols just took forever to arrive. It hadn't moved - I was just too optimistic - this had fed through to Christine and her expectations were not being realised.

Just before we got there it started to rain. Messing about with waterproofs, and not talking much to each other, we managed to get separated with Christine following the right path and me heading down the wrong albeit shorter path to the disused petrol station. We then had the classic chasing each other around the petrol station until we found each other again.

The final descent down to Sant Cristofol in the rain just went on and on. My phone was nearly dead so was saving the GPS and although I knew I was on the right trail didn't know when we would arrive. There were no way marks whatsoever. The final sting in the tail was the location of the casa rural which was below Sant Cristofol and on the other side of a small gorge. Christine was very savage.

Anyway we arrived, the room had a bath, Christine had a beer and a soak, and by the time we sat down for dinner all was well with world. Tomorrows walk is thankfully a shorter one.
If you want to see the full extent of our pain on a map then please go to the following link.