Having sworn blind last night that this was the last of John's trips I wanted to come on, I woke up this morning feeling fresh as a daisy and looking forward to a walk. The sun was already pouring through the window and there were 2 donkeys quietly grazing outside.

Breakfast was something else. The woman who ran the Casa (or did all the work) brought a wooden trencher to our table that had a sort of miniature tree coming out of it, on which hung 6 or 7 varieties of home cured dried sausage, all of which had to be tried with our tosta and olive oil. This, combined with home made jams and cheese washed down by gallons of coffee, made for a feast. I sneaked an inch of salami into my trouser pocket for later.

We set off down the hill in sunshine listening to cuckoos. God was in her heaven and all was right with the world. We continued along a small road for a bit past some fish farms and had to cross a small river barefoot because it was so swollen with last night's rain. The path then wended gently up through woods of pine and evergreen oak, with honeysuckle and lavender joining the usual rosemary and thyme making everything smell good. We continued for a couple of hours, so relaxed we almost missed a turn at one point. 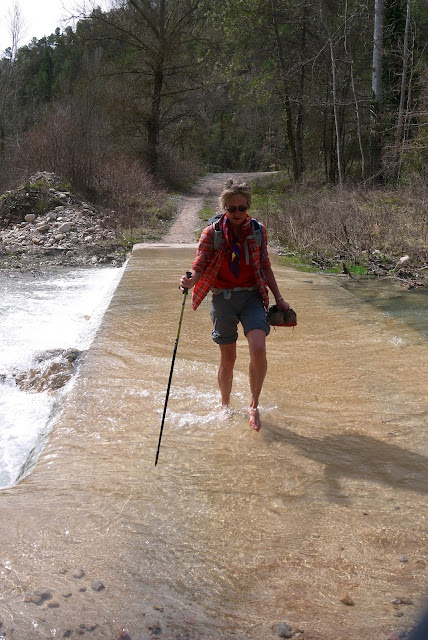 We reached the church of Sant Esteve at about 12 and had a peep inside. Apparently Josemaría someone found a gilded wooden rose there in 1937 that belonged to Our Lady and got herself a sainthood out of it. We sat in the sun outside then moved on.
The afternoon route remained a doddle but this time contoured through scrub rather than trees. Beneath us we could see a brand new beautifully engineered road with absolutely no traffic on it. After an hour or two we went down and finally reached the little town of Peramola where a street market was about to pack up. We were surprised to be greeted by a large ruddy faced man who had been at the Casa last night. He proceeded to unscrew the top off a large jar containing balls of black stuff looking like horse manure and invited us to take a sniff. 'Troof' be proudly announced which we took to be truffles. Weird smell.
After a quick beer stop we walked on across the valley along a wide unmetalled road (presumably the road which serviced the valley before the new Eurodollar one was built), and arrived at Oliana at 4.30. Hotel Cal Petit, just out of town to the south, is excellent - thanks for booking it Juan.

All in all a great day. Was musing as we walked about the need to revise the European Walking Times Directive in order to improve consumer protection. For a start, total walking length per day needs to be capped. I suggest 30k/day as a starting point for negotiation. Secondly, itineraries with no consumer offer of tea or coffee in the morning should be banned.

Today's walk was 26 kilometres long. In the week I've been out here I've covered 227 kilometres which ain't too bad for someone with a free bus pass.