Special thanks to Richard and Nicola who were such kind hosts in their beautifully restored casa rural in Nela. They provided me with a huge packed lunch which was just as well because the walk today was long with limited opportunity for refreshments on the way. 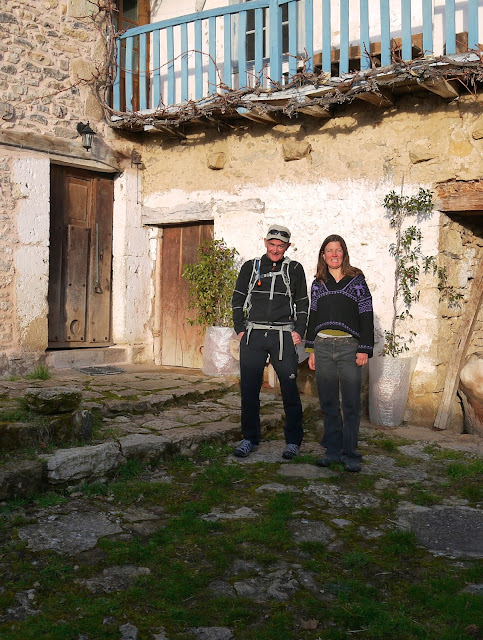 The forecasts continues to be bad and it should have been raining today but instead I was treated to perfect spring weather. In fact it felt like the countryside was coming alive, lots of skylarks singing, the fields greening up under the warm sunshine and the farmers starting to get busy. Today I moved into a gentler countryside. Still had some limestone cliffs but much smaller and the cultivated space between them now dominates. 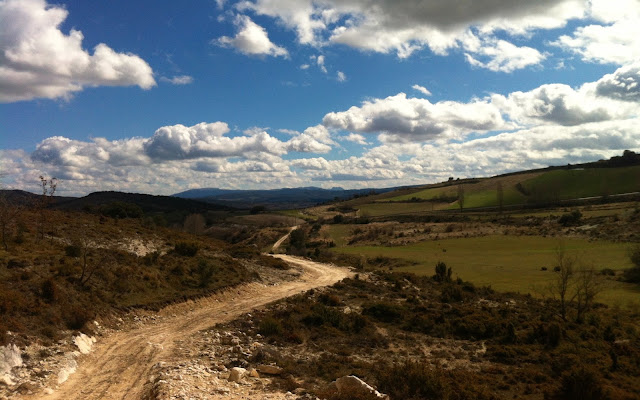 After a gentle climb up the hill from Nela, a short walk east, the trail went south along a very pretty valley before climbing up to the little church of San Bartoleme famous for its combination of Muslim and Gothic styles. Great location on a ridge between two valleys. 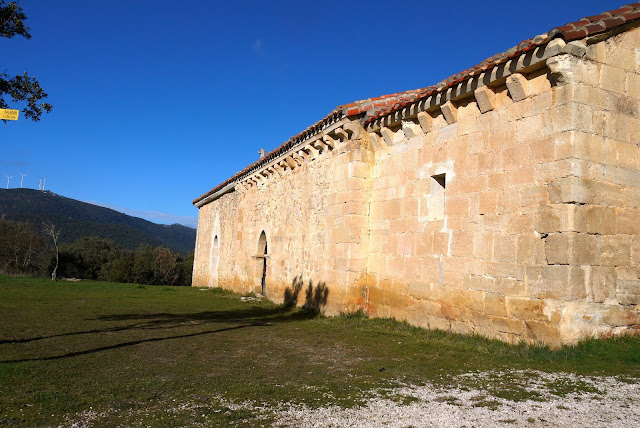 Next came the prettiest village, in a series of pretty villages, Salazar. Some grand houses adorned with coats of arms all pointing to a particularly affluent history. I particularly like the house with the ancient Fiat (Seat?) 500 parked outside - very stylish. 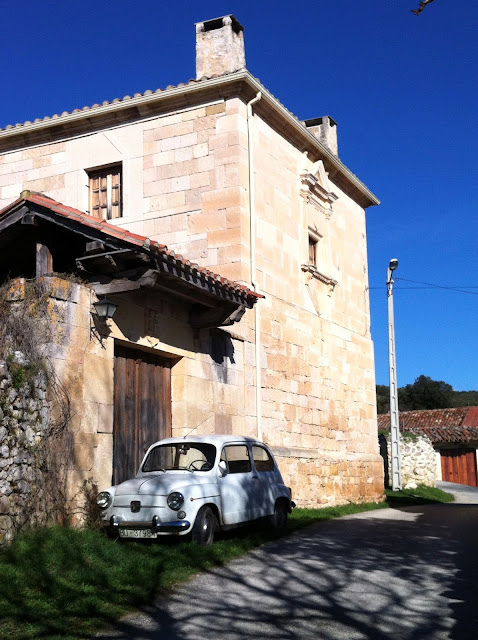 To my English eyes, Spanish arable countryside appears massive and open and this was particularly apparent walking along the ridge between Salazar and Torme. English countryside is dominated by hedges and drystone walls, and it's the absence of these boundaries that give the Spanish countryside it's clean open feeling. 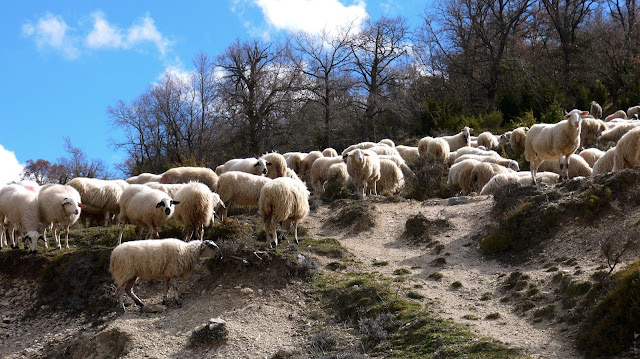 Hedges of course were all about grabbing, through statutory enclosure, common land. They also meant that you didn't need as many shepherds to tend the sheep - the hedges kept the sheep from the arable crops. I was reminded of this by two dogs who charged at me in the valley just beyond Torme. The sheep were grazing grass on the side of hill watched over by a shepherd sitting on rock which I guess has been sat on by generations before him. Despite letting his dogs bark their heads off at me he seemed like a nice guy and happily posed for photograph. 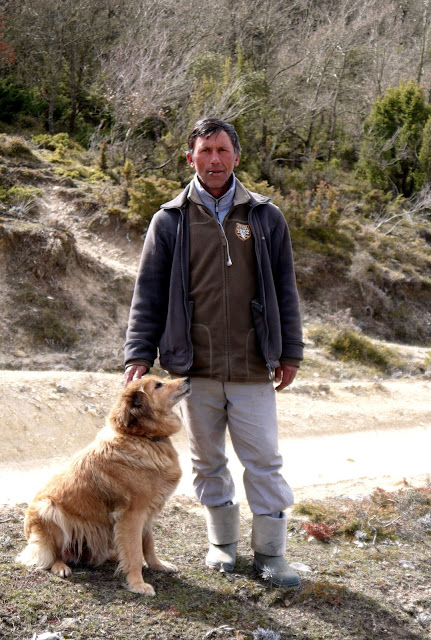 The Laguna de Barcena is an example of a little lake which dot the landscape near Gayangos. An information board explained their origins and I guess they are quite significant given the lack of natural standing water in these parts. 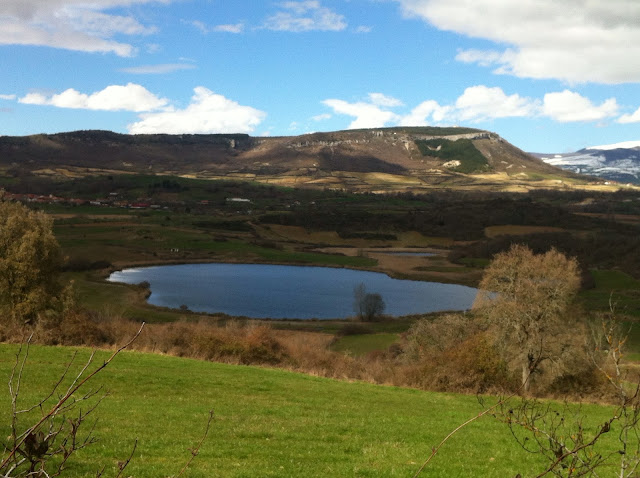 The countryside around Quintanilla de Pianza is serious cow country and the green lane heading up the valley was now a deep wet gulley, gouged out by centuries of tramping bovines, and full of cow shit. I don't mind getting my feet wet in a clear stream but this was too much and I went straight up the 10 foot bank in a manner resembling spider man.

Salinas de Rosio was another pretty village, nestling under a rock outcrop, but more memorable was Navagos, both because of its frantic barking dogs and its defensive tower. I'm hoping for a number of these towers, seen a couple in the distance, but this is the first one I recall on the route. 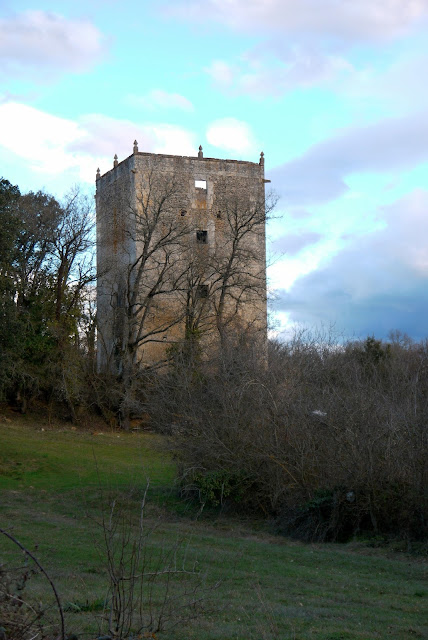 It had been a long day, 9 hours of pretty solid walking (about 42 kilometres) and Juan told me that if I rang Guillermo at the Los Perrechicos casa rural in Oteo (about 2 kilometres off the route) that he would come and pick me up. It's much easier to confuse someone over the phone when your Spanish is minimal than it is face to face and I generated a lot of confusion. I sent a text to Juan and within seconds I was in Guillermo's car heading towards a very comfortable evening in his hotel.


Posted using BlogPress from my iPhone
Posted by John Hayes at 8:17 AM