We are now in the Parang Chu valley.  It's a huge feature, flat bottomed with towering latte coloured cliffs on either side and occasional views of even higher snow topped mountains above the cliffs. The route takes us along the bottom of the valley with side climbs over moraine when the river prevents an easier route. 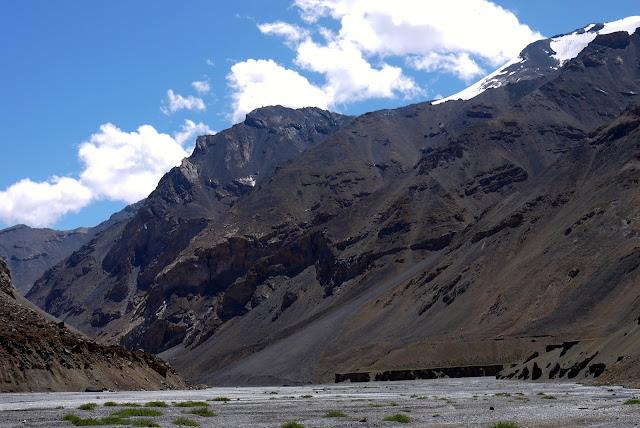 It's a dramatic valley.  It reminds me very much of the western side of the Annapurna Circuit - the two or three days around Larjung (which the Nepalese claim as the deepest gorge in the world), but if anything, with the light brown cliffs and incredible erosion features and huge scree on each side, this is even more beautiful.  We also talked with Pete about his trip along the Mustang Gorge which he doesn't think is as good as this. 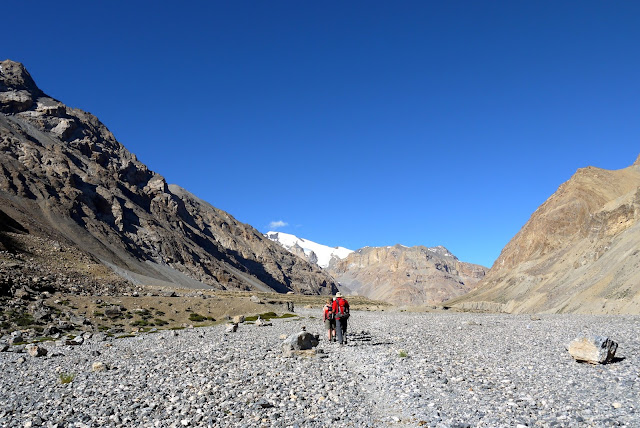 All three gorges share common features.  They are wide with flat gravel bottoms and steep sides. They are all on the "Tibetan" side of the main Himalayan ridge of ultra high mountains and, shaded from the Indian monsoons, are relatively dry.  Based on my "A" level geography I guess they must have been gorged out by huge glaciers but there just hasn't been enough water in the rivers since to flush out the debris which has gathered since the glaciers retreated.

Lots of gravel but not much grass and last night the pony men had to cross the valley and climb high into a side valley to find any.  They really have to work hard.  They have to get 25 ponies/mules ready for loading each morning, load them up, and then keep them under control while they catch us up, overtake us, and get to the next camp site to make sure the tents are up by the time we arrive.  The ponies/mules need constant maintenance and as well as making sure they have enough to eat, protected from the attentions of the wild asses, have shoes replaced  and ailments treated.  It's hard on the ponies/mules as well but loads seem light in comparison to some we have seen.  Still they do get tired and one of them looked like he was on his last legs last night only to be restored by one of the pony men who, almost lovingly, spent about 30 minutes stroking his ear.  Will get Christine to try it on me.


The Russians, by the way, are not Russians at all but from Belarus.  The man is ignoring all the negative vibes.  Not only did he give the female Belarusian a hard time, he insists on going around, Putin style, shirtless.

Today's walk was amazing, perfect weather and wonderful scenery and an interesting but fairly easy route.

The weather is now chillier with a fresh breeze blowing down the gorge from the glacier above. The gorge is incredible: the scale of it, and the strange erosion features that litter the sides; almost like rows of silent sand people watching us make our slow but steady progress upwards. The altitude, at about 4,900 metres, is strangely energy sapping even though we're not exactly doing taxing walking today. 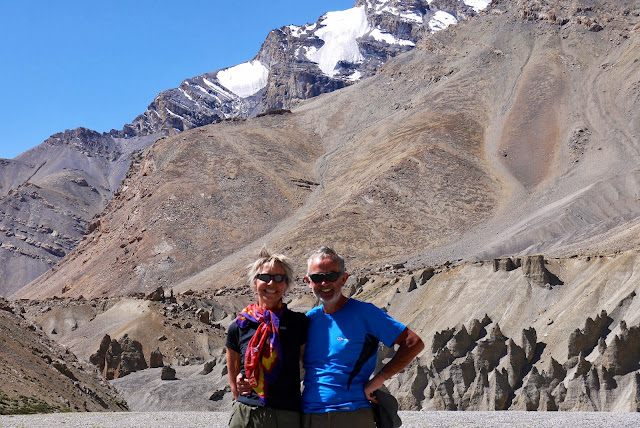 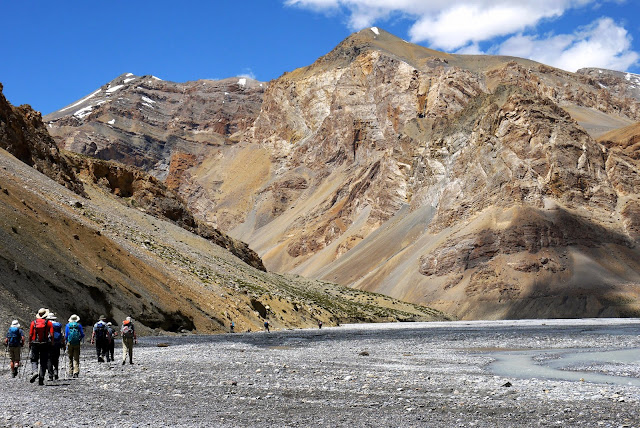 The tougher walking came in the afternoon when the valley turned sharply to the east and the path took us across a high tongue of moraine at the corner.  After so much walking along the flat the climbing came as an unwelcome surprise particularly as the trail was in places just inches wide and with steep drops. Everytime the thought crossed your mind that this might be dangerous you just had to remind yourself that 25 loaded ponies/mules had already made it through!

Of course the rapid passage of the ponies meant that our camp was already set up when we arrived; a cup of hot sweet lemon was waiting as an instant refresher and all we had to do was drop our day bags, blow up the thermorest, and persuade ourselves to have a wash.  Tough walking in the Indian Himalaya!
Posted by John Hayes at 10:52 AM

Email ThisBlogThis!Share to TwitterShare to FacebookShare to Pinterest
Labels: Ladakh, The Traverse of the Indian Himalaya