After three tough days, an easier one today.

We saw signs that the Changpa nomads were about yesterday but today we got to meet them. The Changpa live on the Changtang plateau most of which is in Tibet. They are semi-nomadic moving their herds of sheep, goats and yak in rotation from one campsite to another, moving on when the grass runs out.  The permanent features of the regular campsites, stone animal enclosures and stone foundations on which a single room yurt is assembled, are scattered across the landscape and used each time the nomads visit.  Dilip says that they are up here in th high mountains all the year round including the 9 long winter when the temperatures get to minus 35.  He tells me that it's so cold in the winter that the nomads congregate in a single yurt and sleep around the fire huddled together in a kneeling position.  I must admit I wonder if this a Ladakh version of urban myth but Dilip definitely believes it.


The first sign of life came about an hour after we left the camp.  Three horseman come charging across the huge landscape with a 20/30 strong herd of ponies.  It was like something out of a wild-west movie.  The dust was flying and hooves clattered on the stones - absolutely brilliant.  No idea where they had come from or where they were going but they cover the ground quickly and like a mirage soon disappeared. 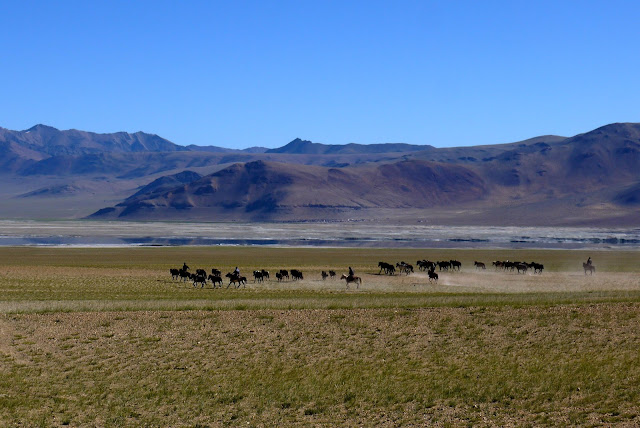 Just up from the Tso Kar salt lake and around the corner we enter a lovely green valley with a river running through it.  The bottom of the valley is packed tightly with yak.  Its Nuruchen and turns out to be the first time we have to take our shoes off to cross a river.
The only real work we had to do today was the climb over the pass, the Horlam Konke La (4,967 metres). It's a long steady climb and the group gets spread out across the mountain as we amble our way to the top. 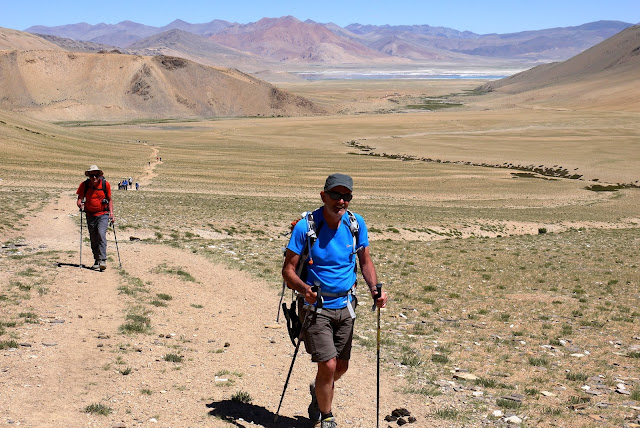 The valley on the other side of the pass is flat, green and full of sheep and goats. The Changpa are here.  Across the whole valley there are perhaps 7 or 8 flocks, each belonging to a Changpa family and each containing three or four hundred animals.  The flocks are being moved as we arrive with men (and some women) and dogs moving at great speed up the side of the mountains.  It's a very impressive spectacle with the flocks getting very close together but somehow never mingling.
After lunch we enter the "village" and pose for pictures with the locals, including a Changpa woman who seems to be in charge and collects money for the campsite. They are very friendly and despite the long winter months kneeling around a yak dung fire trying to sleep, Dilip insists they are very happy.  Apparently they make decent money from their animals and indeed there were a couple of modern trucks parked outside the yurts and they only stay up in the mountains because they like it.

In the camp we had most of the afternoon to rest and wash clothes in the small stream with ran alongside.  It was small when got there but, swollen by meltwater from the glacier, turned into a raging current by the end of the afternoon. 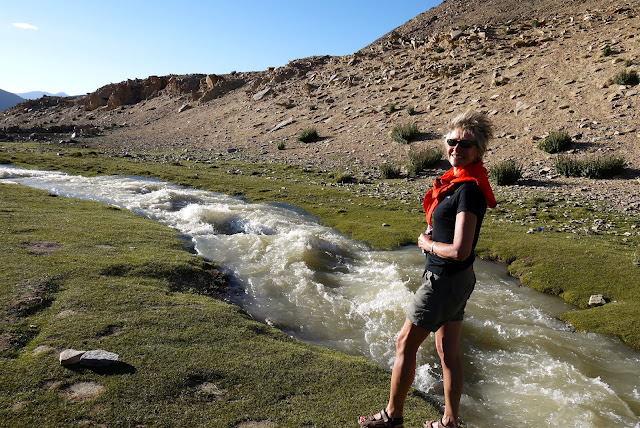 After dinner we go to visit the Changpa woman we had met earlier in the day.  We all crowd into the her yurt and fill it.  She takes her best china mugs out of a box and makes us sweet tea and offers us a sort of lassi drink and some cheese.  We get "Dr Nick" to sample everything on the basis that it will be easy for him to cure himself if he gets ill.  The cheese tastes like Parmesan.