Back on the GR1 Sendero Histórico - to Salamon

Over the last 3 years I've walked nearly 4000 kilometres in Spain.  My Spanish hasn't improved but I am starting to find my way around. The more familiar I get with the country the more I like it.

I'm a particular fan of the long distance route, the GR1. It goes all the way from the Asturias, in the north west of Spain, to the Mediterranean a journey of nearly a 1000 kilometres. I walked most of it in March and April of this year and despite the unusually poor weather I thought it was brilliant.  It's a well known walk in Spain but without an English language guide doesn't have an international reputation so I've been able to persuade a publisher that if I write one they'll produce it.

So of instead of walking the Ecrins circular, the trip I had planned to do in September, I'm back in Spain walking the GR1. I'm here for 2 weeks and I'm trying to do 2 things. Firstly I'm walking stretches which either I missed earlier in the year or which didn't go too well. Secondly I want to look at the options for getting to and from the trail.  On this trip I'm revisiting the western half of the route and all being well will back next April to do the rest.

Normally my trips are fairly simple - I just have to work how to get out to the start and how to get home again from the finish.  This one is a bit more complicated and mixes up stretches of walking with cross country bus journeys. I've got the bus times from the internet and to be honest there is a lot I might have got wrong.  I do have a flight to catch in Zaragoza so cock ups could be problematic.

I've been here two days and so far so good. For the next four days I'm walking the start of the GR1, from the pass at Puerto Tarne to Reinosa.  Some of it is completely new to me and some of it was just impassable last time because of the snow.

I flew from London Stansted to Asturias Airport and caught the bus through lush green countryside to Oviedo.  Oviedo is a lovely city and it's one on a growing list of must return to places in Spain.  It's particularly famous for its pre-romanesque buildings the best of which are located just out of town.  These featured in the Woody Allen film Vicky Cristina Barcelona and his praise of the place means he is now a local hero and honoured with a city centre statue. 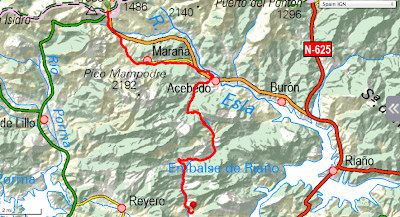 The next day I caught the bus up to Bezanes and then picked up a taxi organised by my Spanish friend Juan Holgado up to the Puerto Tarne and the beginning of the GR1.  Interesting journey through what must be smoke stack Spain, lots of heavy industry, some of which is still working, all set deep in wooded valleys.  Felt like a scene from the beginning of Deer Hunter.

The final part of the trip up Puerto Tarne was particularly pretty, deep sided very green valley full of beech trees.  I asked Raff,  the taxi driver, if it rained a lot and he claimed it only rained in the winter.

The signs on top of Puerto Tarne told me that I was now in the Picos Regional Park easily confused with the Picos Europa National Park which is just to the north east.

The season seemed to change from one side of the pass to the other.  On the northern side it could have been late spring but crossing over where the effects of a long hot summer became apparent. The grass was brown and the trees were dark green and the cattle, which were everywhere, had become fat and languid from long days munching in the sun.

It's a beautiful landscape and as trail takes you down the valley the size of the grey limestone peaks to the south, many well over 2,000 metres, becomes apparent.  Apart from the cattle I had it all to myself.

After descending steeply across open country to the unoccupied hamlet of  Casarío de Riosol the route took me down for about 2 kilometres a dirt road to the village of Maraña which sits nestled under a huge cliff.  I hadn't got any food and bar in the village didn't have any either.

After leaving the village on the road the trail takes you south across an old bridge what I suspect was part of the original road to the village of Acebedo.  Walking across a flat bottomed valley full of brown cows with calves and great views back up the valley and the peaks to the south the walking was easy. Acebedo is supposed to have a place to eat but I couldn't find it.

After Acebedo the route climbs, steadily at first following a stream up a valley and then more steeply as you approach the Collado de Lois (1545 metres).  By the time I got to the top I'd climbed about 400 metres all the time enjoying great views back into the limestone massif behind me with its  2200 metres summits.

The valley on the other side was less dramatic than the one I had left but was pretty nonetheless.  After a steep descent across open meadow it joined a dirt road which took me along the bottom of the valley for four kilometres or so to the hamlet at Lois.  Lois has a huge baroque style church but not much else.

The last 5 kilometres, along a mettled road, are a nasty sting in the tail. Lovely scenery, a tight little gorge, and I got to see my first vultures of this trip, but a hard road at the end of the day is horrible thing.

Salamon is another tiny hamlet but the first place on the route with accommodation. The casa rural is quite expensive by Spanish standards (70 Euros half board) but the food was excellent and most important there was a lot of it.