We haven't quite decided whether the Indian Himalayan Grand Traverse was our favourite ever trek but it's definitely up there with the very best.  It managed to combine novelty, adventure, great scenery and excellent company with good organisation

We've got Valerie Parkinson to thank for the idea of going on the trip.  Valerie is the Asia Base Manager for Exodus whom we met for the first time on the Annapurna Circuit last year. Valerie is a trekking legend.  She was the first British woman to summit Manaslu, has been working for almost 30 years in Nepal and Kashmir, and leads for Exodus on the development of new treks in the area.  After listening to the amazing account of her attempt on Everest we asked our usual question "what's your favourite trek" and without hesitation she came back with the "Indian Himalayan Grand Traverse".

So where is the trip and what makes it's so good?

The Indian Himalayan Grand Traverse crosses Ladakh, one of three provinces in the Indian state of Kashmir and Jammu.  Geographically it's in an interesting place.  Kashmir and Jammu is the bit of India that inserts itself into central Asia and, from geological point of view, Ladakh is really part of the Tibetian High Plateau.  It's very high and very dry with long cold winters and short hot summers.  It's also interesting from a geopolitical point of view. With the Indian Army facing up to the Pakistan and Chinese armies over contested borders, it's one of most militarised parts of the world.

The trek itself takes thirteen days and goes north to south across the Changtang Plateau from Rumtse to Kibber.  It's a high altitude trek and you're above 4,500 metres for most of the time (average altitude for the whole trek is 4,900) with several camps above 5,000 metres.  The trail itself follows an old trade route and, apart from the slightly treacherous ascent of the Parang La pass towards the end, it follows a considerate route suitable for the heavily laden mules it was designed for. 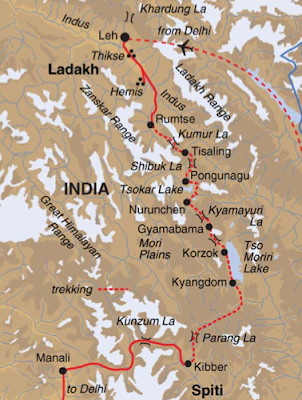 To prepare for the altitude you spend three nights at Leh (3,500 metres) which you fly to from Delhi. At the end the trek you are driven from Kibber to Chandigarh via Manali and Mandi, a trip which takes three days but which unexpectedly turned out to be an enjoyable element of the trip.

Valerie promised us that we would enjoy the camping and she was right. High altitude camping in Nepal can be a trial, particularly the cold mess tents.  Although it was chilly at night, sometimes below freezing, it was nothing like as cold as it gets in Nepal.  We had some "weather events" but the afternoons were nearly always sunny and cloud free and the days were that bit longer than in the autumn/winter/ early spring Nepalese walking season. Valerie's description of a "summer camping trip" was sound.

Of course the location for most of the campsites was absolutely awesome and in general the scenery for me was both new and special.  The general theme is high altitude desert with a stark contrast between the rusty reds, browns and yellows of the landscape, sparse in vegetation, and a deep blue sky.    There is also, however, enormous variation.  We crossed classic desert scenery, like a scene from Lawrence of Arabia, but also spent a day walking alongside a lake which could have been a Mediterranean shoreline and a scene out of Mama Mia. We spent time in lush valleys full of grazing yaks, sheep and goats and three days in a long deep gorge where nothing grew.
The Changpa nomads, the people who live on the plateau were amazing and provided real drama on the trip.  If I had to choose one scene to remember it would be riders driving a herd of ponies across the desert near the Tso Kar salt lake.  It was early morning, the weather was perfectly clear and the dust being kicked up meant we could see them coming from miles away.  I guess others would choose the rider driving his herd of yak - bull, cows and calves - up the valley and past us while we ate lunch and then lifting his hat to wave like the Lone Ranger. Also competing would be the shepherds running up the sides of the valley with their enormous herds of sheep and goats, taking them out in the morning and back again just as the sun set.
The Changpa are Buddists and don't hunt the local wildlife which may explain why, despite the long cold winters, there is so much of it.   It doesn't however explain the behaviour of what I think is now my favorite animal the "wild ass" (in reality a wild horse or Kiang).  These animals are either standing still staring or running flat out.  They gallop across the landscape for no obvious reason other than to see how fast they can go.  In addition to the wild ass show-offs there were marmots, pikas (a sort of mini-marmot), huge hares, blue sheep (a sort of goat), and ibex.  There were lots of different sorts of birds including something described to me as a Himalayan Ostrich.

Although there was no such thing as a typical day, if you have done a trek in Nepal you will recognise the routine (most of the crew came from Nepal).  You are woken at 6am with an early morning cup of tea, followed shortly with a bowl of water for a wash.  After breakfast in the mess tent you start to walk by 7.30.  There is a hot lunch at around 11.30 and with the walk finishing at a reassembled camp site mid afternoon.  There is usually a drink provided on arrival, afternoon tea and biscuits and then dinner at 6.30 or 7pm. There is plenty of food although I suspect everyone lost a bit of weight.

The main difference to Nepal was a pony train to carry the gear rather than porters.  There were 25 ponies (a mix of ponies and mules in fact) for 12 trekkers and 7 other crew.  The two pony men were amazing - packing, unpacking and keeping all their animals fit and healthy.  It was a very well managed trip led by an excellent Ladakhi leader Dilip who was professional, diligent, knowledgeable and good fun to be with.

If you're thinking about a trip like this there are a couple of things you should be aware of. Firstly once you start the trek it's high altitude and stays high.  For most of us this meant you didn't sleep well.  Secondly on some days it gets very hot and there is absolutely no shade.

The campsites (with one exception) were good and many had nearby fresh spring water for a wash.  But the practice of taking everything out of the campsite that you bring in has definitely not been established here and something will have to be done if this route continues to grow in popularity. A couple of sites were spoilt by the debris of previous trekkers.

The only downside of the trip for us was the stay in Leh.  The room we had in an otherwise OK hotel was next to the street and at night the homeless dogs in Leh, untouched by the Buddist local authority, charge around making a hideous noise.  We started the trek absolutely knackered and with food poisoning we had also picked up in Leh.

If you're thinking "could I do it" then you might want to make a comparison with the 11 strong group I went with.  Everyone had been on trips like this before and the age range went from early thirties to mid-sixties - there were 7 men and 4 women. People were pretty fit with at least three marathon runners in the party (although this is not a protection against altitude sickness).  It was a multi-national group which included, in addition to the Brits, a German (who lived in France), a Swede, a Canadian and someone from Ireland. All but one managed the whole trip.

It was a great group and a significant part of the success of the trip derived from the fact that everyone got on so well with each other.

If you want to find what happened on a daily basis than please read the trip diary entries below.