Alleghe is a lake side resort sitting in the shadow of the huge Civetta mountain.  It's a very pretty place and our schedule involves here for three nights both to rest and to provide a contingency in case we got held up earlier on. Interestingly, although we did have bad weather and had to stop an extra night at Pfitscher Joch, the desire the avoid sleeping in the crowded Dolomite huts has meant we have caught up with the day we lost.


Today was a transition stage and involved heading east and leaving the Alta Via 2, which continues south through the Marmalada Dolomites, and joining the last part of the Alta Via 1 as it heads south to Belluno.

The first couple of hours walking was excellent.  After a short climb up from the pass at Pordoi Joch we joined a lovely contour path running along the south side of a grassy ridge.  The views into the Marmalada Massif with its glacier and the highest peaks in the Dolomites were fantastic.

Descending down to the reservoir, the Lago di Fedaia, we stopped for a quick look in the First World War Museum full of artifacts which have been revealed as the glacier on the Marmalada retreats.  It's almost inconceivable to think that trench warfare took place right on top of a 3000m mountain range which, even in the summer, looks inhospitable.

After the Lago di Fedaia the quality of the route deteriorated.  There is no real waymarking but the sensible option involved following the line of a ski-run down the steep grassy slope to Malga Ciapela and then a tarmac path down a gorge to Sottoguda.  The gorge is clearly a local feature, particularly in the winter when there are hundreds of frozen waterfalls, and you have to pay a toll of 2 euros just to get through it.  Sottoguda itself has lots of original Alpine houses/barns and scattered about the village were little marionettes in traditional costume.

The rest of walk was frankly dull and it seemed to take an age to get to Alleghe.  Last night I had looked up hotels on Tripadvisor.  The best rated one was out of town so thumbs down and second best rated one couldn't accommodate us for 3 nights.  The four star Europa had a great location, right next to lake but poor reviews and we only tried it after getting pushed back on the one in the middle of town.  It turned out to be excellent, we have a huge room with a massive balcony and views over the lake and it's great value - 60 euros half board.

I'd really like to understand how far out from central Europe the hotel salad bar goes.  It's endemic in Austria but spreads right down into Italy.  Will we get salad bars all the way to Venice?

Essentially it's a help yourself first course of the evening meal and the one at this hotel is a particularly fine example. It includes about 30 dishes which, in any other context, would be regarded as completely incompatible. Guests move around the table and attempt to pile as much onto a single plate as possible.  This pre-meal meal is then consumed while the main meal (if you're staying multiple nights, chosen at breakfast) is delivered.  It's an interesting system designed perhaps to get everyone into the huge dining room at 7-30 - if your're not there bang on time there is a risk that your choice of 30 dishes will be reduced to 20.

Alleghe has provided us an opportunity to do some shopping for gear.  We both wear incredibly comfortable Inov8 trainers which are great but don't last very long - between 6 and 7 weeks of continuous walking. Christine felt her pair, which she had worn on our last walk in Spain, would make the trip but they didn't and fell apart bang on schedule if not a little ahead of it.  After wearing the same shoes for several years, change is a big deal particularly two thirds of the way through a trip.  After trying out about 10 different pairs, choosing a pair and then returning them after about an hour she chose a pair of very light Salomon Geckos, quite a radical design, a cross between a shoe and a sandal.  It's going to interesting to see how these work, they could be fantastic in particular on the 4 day flat walk into Venice.

The weather is medium to poor at the moment (rain and clouds) and although the forecast looks a bit better for next week it's not really settled.  We bought swimming costumes hoping to go in the lake but the hotel manager tells that this year it's just been too cold.  Confirmation, if we needed it, that we have been very unlucky with the weather. 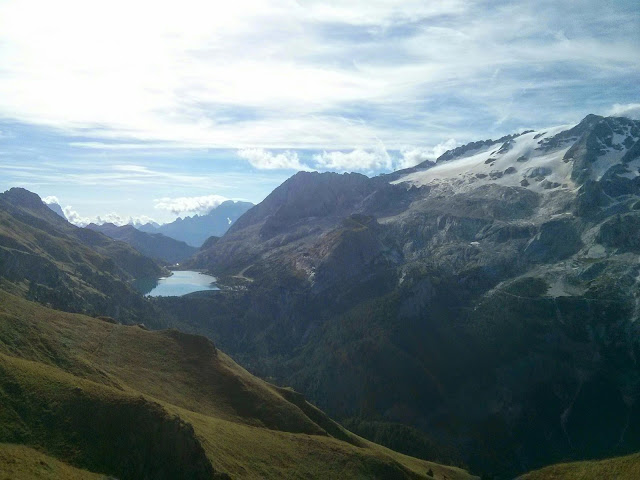 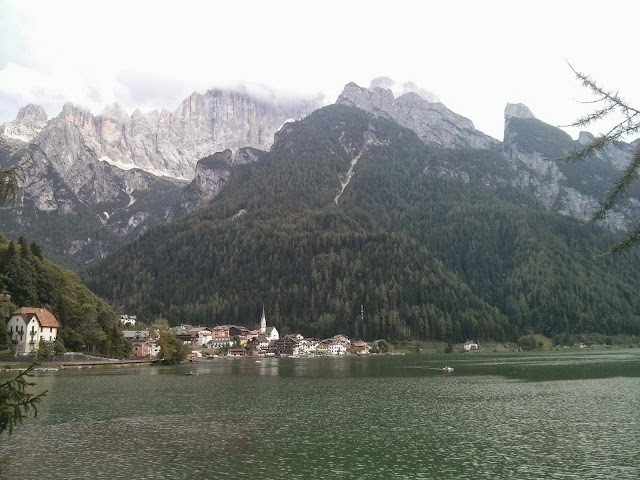