If you’re on a relaxed schedule than Montanejos is an excellent place to stay for an extra day.  There is a good choice of great value accommodation and some brilliant local walks.  In particular, if you decided to visit Montan on the previous stage, and missed the Barranco de la , you can complete an exciting, but quite short circular walk up the gorge on your ‘day-off’.  An excellent description of the route can be found by following this link.  It’s an 8km walk and can be combined with a swim in the springs.  The springs, which used to be the private preserve of a 13th Century Moorish King (and his harem), are supposed to be cool in the summer and warm in the winter and give Montanejos its spa status.

Day 4 itself is a full day’s walk, 27km long with around 1,000m of ascent and descent.  The walk splits neatly into two halves with San Vicente providing an ideal half-time point. The first half is tougher, involves a route that passing through densely wooded countryside and crosses a deep valley.  With all the hard climbing done the route then crosses a fairly flat, arid and open upland plain before making a steep descent into another valley accommodating the beautifully located Villahermosa. 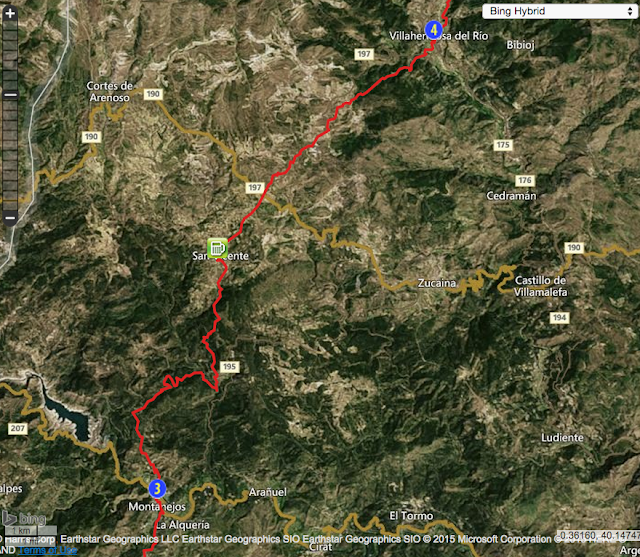 The on the route is mixed and particularly poor in the second half where farmers have knocked it about a bit.  It can be found, a bit of assistance from the GPS is needed.
From the of Montanejos the route follows the main road north, turns right over a bridge and then joins a path that climbs up the eastern side of the valley. Following mainly paths, but occasional short stretches of road the route meanders its way north then east through pine trees.  Terraces suggest farmland now reclaimed by the forest.  The hard climbing over, the route then wanders, still in in an easterly direction and climbs gently to a pass before starting down a steep path into a valley. On the other side of the valley is the little village, largely abandoned, of La Artejuela.  At its bottom is a fast running stream, not big enough for a swim, with pools ideal for cooling off feet warmed up by the sharp descent.
After climbing out the valley the walk into San Vicente is spoiled slightly by some road walking, although the final approach takes you across the intensely cultivated fields immediately surrounding the village.  If you arrive there at the weekend the bar, full of people attracted to the market, can be a lively place but on other days the town feels is empty.
The next phase of the walk traverses an upland plain, a mix of small fields of barley, olive groves and uncultivated Mediterranean scrub.  Finding the original route is a pleasant challenge and much preferable to a walk along the new road that has clearly superseded it.  The sudden arrival at the Ermita de San Bartolome will come as a bit of a surprise, it’s a lovely church, quite large but completely isolated.
The final stretch of walking is perhaps the best of the whole day.  The route initially follows a shallow valley (the route is still climbing gently) and then follows an ancient lane through an old fashioned countryside of dry stone walls and abandoned farmhouses.  If the weather is half decent you should get your first views of Penyagolosa the most famous if not the highest mountain in Valencia. After reaching the highest point of the day (1025m), the route, still following a lovely old lane, starts steep 400m descent, after walking 26km, and the views of very photogenic Villahermosa del Rio start to open up.
Despite its obvious attractions there is only one hotel in Villahermosa del Rio (the Ruta Aragon).  It’s a classic rural Spanish hotel, family run, excellent value and the bull fight of the week on the television in the corner of the bar.  Watch out for the portrait of Franco, hidden away near the refrigerator, behind the bar.
Posted by John Hayes at 8:40 AM

Email ThisBlogThis!Share to TwitterShare to FacebookShare to Pinterest
Labels: GR 7 in Castellón, GR 7 in Valencia