One word provides an all too succinct summary of today: 'wet'. It was drizzling as we left our lovely hotel at about 9-30, and properly about 30 minutes later. In the day long weather battle between good and evil, good turned up off stage for just a few minutes early decided he had better places to go and the rain came down even harder. After sticking the route until late afternoon we cut our losses at about 4.30, took a big shortcut across the final headland and dropped down into Porto do . Almost impossible to imagine but as we entered what I suspect is a sad little in the sunshine the rain took on monsoon proportions. After roaming the deserted streets for about 30mins we found our accommodation, an apartment, and started the not insignificant task of drying ourselves out.
And yet, despite the weather, I enjoyed today. With the weather onside the walk would have been epic, but even with it against me, the quality of the walking 'shined through'.
It started once we had circled the first bay and climbed up the day's first headland. The path, a sodden trench through bracken then , stuck close to the cliff edge, and with the waves crashing on rocks all to immediately below, it was an intimidating . It was also hard going and after nearly 2 hours, and as we approached the second lighthouse on the route we we had only covered 5 kms.
Turning south from the headland and its looming lighthouse the tough going for a couple of and then at last relented and the path flattened out. Crossing a beautiful sandy beach we talked to a German who told us, as he returned to his camper van, that there was no such thing as bad weather only bad clothes. We pretended to agree with him.
We ate sandwiches from yesterday's Michelin star restaurant under an overhanging rock on the edge of a beach, out of the rain, but stopping soon made us cold. Pressing on we soon warmed up and just for a few moments, with the light lifting we thought the rain might stop. It didn't, the easy walking came to an end, the path got even wetter, steeper and again we slowed down. Water flowed down the trails and we gave up trying to keep our feet dry.
After a particularly steep descent to a lovely cove, with Christine complaining about her knees, I slipped snapped my walking pole and gashed my hand. Nothing with the weather a confirmed delinquent we decided to cut our losses at the next opportunity. One advantage of coastal walks is that there is always the chance to go straight across a headland. Taking a more direct route to Porto do turned a 26km walk into one which was just over 20km.
There is no getting away from it Porto do Corme is a bit of a dump. There is a restaurant somewhere in the town which has good reviews but I couldn't persuade Christine to look for it. So after a 10 course taster menu in a Michelin star restaurant yesterday, today we made do with a mega bag of crisps, a bottle of wine and a pizza warmed up in a microwave. 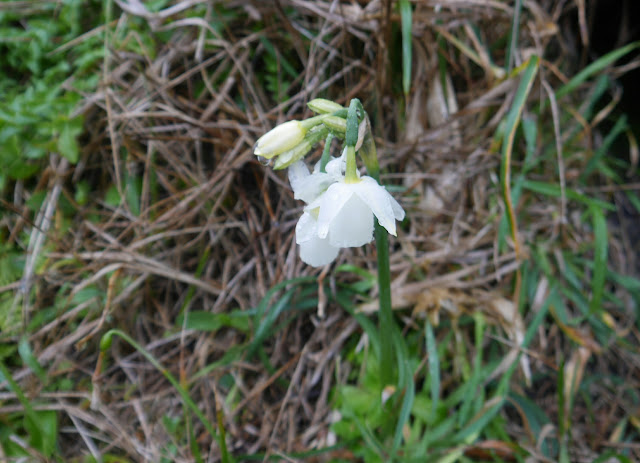 The apartment itself is interesting. There are four blocks of flats on the eastern side of town, each with about 30 properties and all empty. Some enterprising soul has decided to put together a nice website, a small sign, and hidden amongst the empty properties is an apartment hotel. We are the only people here.

The accommodation - an apartment was at the Apartmentos Turísticos Playa  Osmo.
Posted by John Hayes at 4:34 PM