91 kms - the rough with the smooth

Today was our best day's cycling so far, lots of variation and stunning scenery. It was not however without its challenges and even today we managed to pick up a puncture. You have to take the rough with the smooth.

Last night, a Monday night, we had the worst food we've had in France, really bad. But tonight, for the same price we had the best.

With this sort of trip you never know what's going to happen next.

The weather was perfect when left our hotel in Royan this morning. I'd cleaned the bikes up yesterday, given the chains a desperately needed oil and after a day's rest we were pleased to get on the Vélodysée again.

For about 10kms the route through the northern sprawl of Royan, not unpleasant as sprawls . A long beach, with old 2nd World War 'Atlantic Wall' gun emplacements marked the transition into proper and the beginning of a great stretch of cycling. The route clung to the coast and took us along an undulating but perfectly tarmac'd track through dense oak and pine for about 30 kms. There were occasional camp sites on the way, including a huge club site, but apart from that the route was empty and the little tracks down to the sandy beach looked tempting.
We stopped at Ronce for a coffee and tried to find a bread shop for a were disappointed, Christine, after 40kms, was starting to get hungry. Crossing a huge bridge over the River descended down towards Marennes ' the city of the oyster' and past lagoons cultivating crayfish. Here the route had been changed and instead of going through Marennes we were being taken north. Desperate for food we headed into town and in the main square found a bar for beer steak and chips. Very good.
Back on what is definitely a new part of the Vélodysée the route then took us narrow roads across a huge marshland, a mix of water meadows with cattle and lagoons. It was fantastic, as as a safari and the bird life in particular was spectacular. We saw herons, storks, , swans, and a range of different sorts of . We think we saw an definitely spotted a coypu, a giant rat like creature a bit like a marmot or a beaver.
Just as the safari came to an end the track became particularly rough and a within a or so Christine had a puncture. A couple of very nice Austrian guys, one on a horizontal stopped to help us with the diagnosis. After St George the other day we picked up yet more puncture mending this time we managed to sort the puncture out for ourselves and get back on the trail. After the previous debacle this felt like progress.
After another 15 kms or so, mainly along an old railway line, we were in Rochefort slightly later than we still in time to see the key sites in what is a very pretty little town. It was built in the 17th Century by Colbert as a secure port for the French Navy. We a had a quick look at the docks hoping to see L'Hermione, a fully functioning 18th Century sailing ship which docks here but it was at sea. The naval museum was a little disappointing as well, there was virtually no mention of the Battle of Trafalgar. 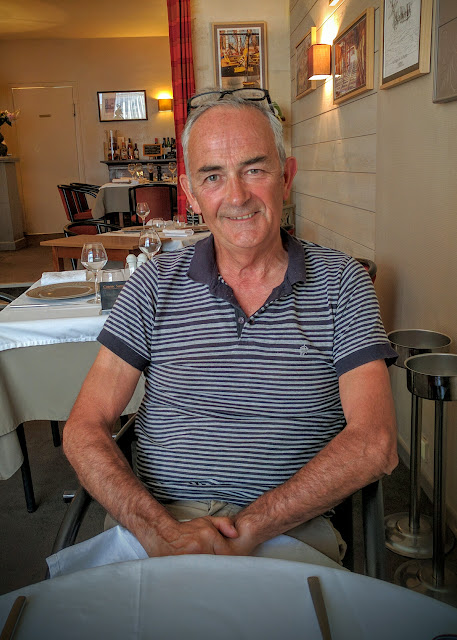