For the second day running I've woken in the morning to the sound of waves breaking gently on a beach outside the bedroom window. Not bad, particularly as we arrived at the Atlantic just in time for a spell of fine weather. Today we are taking a break, at the in our journey back to Brighton, and having a day out of the saddle relaxing in Royan. Royan is a quiet seaside town, almost stylish, a sort of French Bournemouth in the fifties.

Yesterday we cycled 85km from Lacanou Océan along 'La Vélodysée', the E1 long-distance cycle route that will eventually track all Europe's Atlantic coast. Turning north after 9 days of cycling west it feels like we're at last heading home.
As is now normal we continue to follow a wonderfully marked and empty track. cyclist explained why the track at the eastern end of Canal du Midi experience is so
. The route had only reached Donneville from the west when the Canal du Midi received UNESCO status and all work stopped - the rest of had to be preserved in its original state. 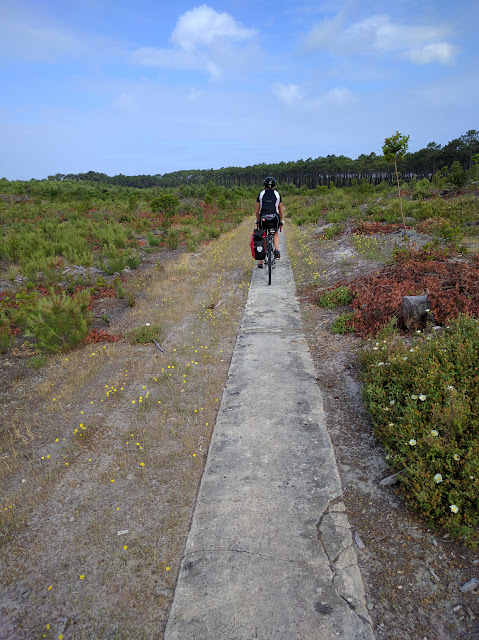 didn't happen with La Vélodysée although the landscape in this part of France is pretty special and in its own way very delicate. The Côte , a huge sand spit, runs along the seaward northern edge of Les Landes, familiar as the source of pit props and turpentine from schoolboy geography lessons. It has Europe's longest beach. It is sparsely the small towns along it attract surfers from all over the world. Behind the beach are endless sand dunes which have been over the decades by pine trees, scrub oak and broom. Scattered amongst the trees near the little towns are huge camp sites, empty in June but ready for the short but intense French holiday season which starts in a few weeks. The Vélodysée runs like a cycling superhighway through the middle of the old scrub covered dunes and links a web of local routes. You could cycle for days here without doing the same route twice and without seeing a car.
We stopped at Hourtin Plage and ate our mid-morning sandwich. Christine was hoping for a the tide was out and the sea seemed a long way off even for her. We had a ferry to catch to get to Royan and the limited Sunday service meant if we missed the 3-10 there was a 2 hour wait. I bribed Christine with the promise of a swim in and we got back on our bikes.
We made the ferry with 10 minutes to spare and 40 minutes later were disembarking on the other side. Getting off was great fun and pretty chaotic, not very European and more like the ferries in Kerala that I experienced three years ago.
The signs for the La Vélodysée kicked in almost as soon as we were back on dry land and directed us north along a cliff top path which we shared with Sunday afternoon strollers. Although we hadn't booked a hotel I'd seen a couple near a bay about two from Royan . The best one had rooms overlooking the sea and we happily paid the extra 10 euros for the view and decided to stay here for 2 nights. By now the tide was in and Christine got her swim.
Posted by John Hayes at 8:10 PM