75kms from Bordeaux to the sea.

Things didn't start too well this morning in Bordeaux. It was freezing cold and for some reason Christine took a total dislike to the cafe where I decided to stop for breakfast. For me the choice didn't matter, the petit dejeuner is always a and it doesn't make that much difference where the ripoff happens. As far a Christine was my choice revealed a fundamental character flaw which could only be remedied by a sustained silence.

The silence was sustained as we passed along the river, through old Bordeaux and out into the suburbs. The suburbs to the west of Bordeaux went on and on and, despite the beautiful surface and the company of hundreds of runners and other cyclists, our glum mood was sustained.

At last we left the endless French bungalows were then confronted with the trail we have seen so far. It stretched forever into the distance. Christine spoke - 'this is like cycling from Berlin to Moscow' and although this seemed to be a bit of I could see her point.
We stopped at a place called St Helene, which on the map looked quite substantial. French towns it has been hollowed out by supermarkets (worse than the UK I think) and all we could get was two slices of pizza and a fizzy drink (for a third of the price of breakfast). It was now 11 but by not talking to each other we had actually covered a lot of ground and Christine suddenly we could make it to Lacanou for lunch. 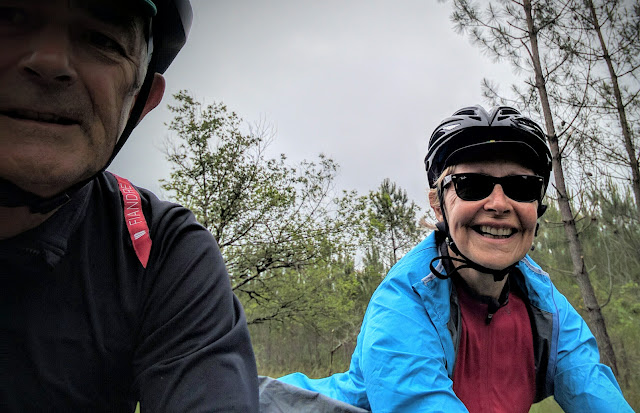 We managed the next 35 kms in about 90 mins, flying along, and working like a real team. The only thing that slowed us down was the need to remove layers, the sun had come out, and the weather as well as Christine's mood had been transformed. 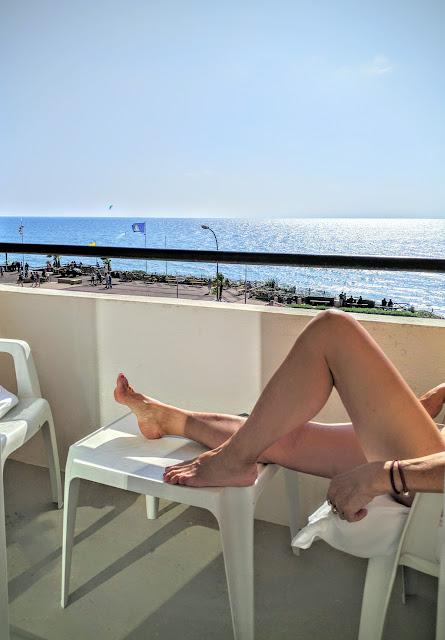 Océan in the sunshine is a very nice place. Not exactly a small resort but with lots of cheap sea food restaurants. Our hotel, run by a super efficient chain smoking woman, had one of the largest. We grabbed a quick shower in a room with its balcony overlooking the ocean and then went into the sea front restaurant where we ate oysters and . To celebrate our arrival at the Atlantic we drank a lovely bottle of white wine, choosing of course, Entre Deux Mers.
Posted by John Hayes at 5:18 PM